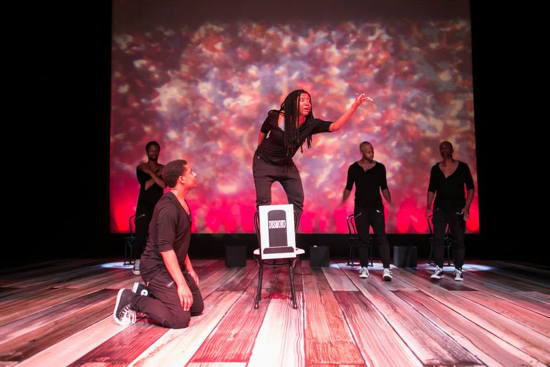 The cast of ‘The Shipment.’ Photo by C. Stanley Photography.

For a theater devoted to presenting plays that “start conversations,” the choice of The Shipment as the final offering of Forum Theatre’s 11th season is appropriate.

Make that, right on target.

It’s unlikely anyone will walk out of the theater after watching The Shipment without being tempted to have troubled and possibly heated discourse with oneself or with others. As the program suggests, if you don’t find yourself ill at ease, you should probably wonder why “your sense of comfort remains intact.”

“…the line from the director’s vision to the actors’ interpretation appears seamless. He has excellently shepherded a difficult, multi-faceted work of theater.”

Playwright Young Jean Lee uses theatrical vignettes to offer an irreverent look at African-American identity in the United States. Her play incorporates vulgar and politically charged stand-up comedy, short dramas, music, and dance to challenge any notions that this country has gotten past its racial hang-ups.

Skin color, in other words, continues to have more of an impact than we’d like to think.

The Forum Theatre production marks the regional premiere of what is probably playwright’s best-known and most-often-performed work (first shown at the Wexner Center for the Arts at The Ohio State University in 2008 and at a New York theater a year later).

This is a well-done production of a provocative—some would say, subversive—play. Moreover, the venue, in the “shadow” of the AFI movie complex in downtown Silver Spring down the block, may not be as well known as it should be to area theatre goers.

The trouble is, it might make a reviewer uncomfortable (well, this one, at least) to have to read background material to understand the structure of a play  In the case of  The Shipment , the playwright has used the framework of a minstrel show to explore, both tragically and comically, how the races look at each other in America. Since minstrel shows are as stereotypical a social and artistic representation of blacks as can be found, the play must be taken somewhat tongue-in-cheek.

The fact that the playwright is Asian American makes her an outsider, even if an observant one. But as performed by the five African-American actors—four males and one female—it seems clear her conception has struck home. So it seemed too for the racially (and gender-) mixed audience, who laughed and nodded and sometimes appeared to feel self-conscious, as the playwright would want.

Some stayed behind for the talkback after the show, on Thursday, May 28.

What was most difficult for me weren’t the playwright’s painful (even if coated in humor) observations of a supposedly post-racial, Barack Obama presidency, America, nor the inclusion of such fiercely timely subjects as unfair police treatment of blacks, or negative attitudes toward whites. Rather, it was the heaps of vulgarity and graphic sexual references in the show’s opening.

I know it’s a satire of black comedian acts—actually, in the program, director Psalmayene 24 calls the play as a whole a “postmodern minstrel show”—but it might make some people squirm and was, in my mind, overdone even for a satire. (In fact, don’t be surprised if the actors seem to be looking at audience members to gauge reactions, both to the “dirty talk” and social observations.)

If you can get past that, though, the journey is well worth it. Following the comedian act is a sketch that incorporates many stereotypes of black life. They’re seen through the lens of a young man who dreams of becoming a rapper, ends up in jail (he’s framed), and finally achieves a success he realizes is hollow. I won’t give away the ending of this section, and certainly not of the final one, which is structured more like a conventional play than the other two.

Taking place at a party of friends and co-workers, one of whom turns to humiliating himself and others, this section touches on unhealthy eating, drugs, destructive relationships, and low self-esteem. But that only skims the surface of a play that is not what it seems. The fun, and again, disturbing revelations, lie in the clever surprise the playwright pulls off.

The best compliment, perhaps, that can be given Psalmayene 24 or maybe any director is that the actors seem to be directing themselves. That might be better expressed as, the line from the director’s vision to the actors’ interpretation appears seamless. He has excellently shepherded a difficult, multi-faceted work of theater.

Then, too, in Shannon Dorsey, Mark Hariston, Dexter Hamlett, Darius McCall, and Gary L. Perkins, III, Psalmayene has an energetic, talented, and versatile cast up to the demands of a show that is really three shows in one.

Narration that touches on many of its themes, including frequent references to Michael Brown, precede the actual opening of the play.

Tony Thomas, II, is the choreographer—whose work is seen both in pure, joyous dance and in street fighting. Katie Touart, costume designer, also follows an arc, from the all-black, gymnastic-lie attire in the first section to party garb in the third.

Allan Sean Weeks is the lighting designer of a show, likewise set in both dark and party hues, and April E. Carter, stage manager, is also a vocal coach. The actors speak a few “different languages,” depending on the section of the play.

Advisory: A lot of language and sexual references in the first part of the show; also, brief gunfire sounds and strobe lights, and drug use.