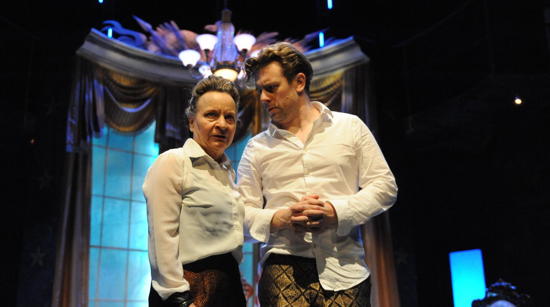 With the Presidential race heating up, some of us might find ourselves thinking you’d have to be brain-dead to vote for one candidate or another. Woolly Mammoth’s Zombie: The American is the answer to these frustrations. The script, by Robert O’Hara, offers us a peek into America’s future – albeit a war-torn, zombie-filled future. A light-hearted attempt at political satire, the show invents a kind of strange, brainy – pun intended – brand of humor all its own.

If ‘Zombie: The American’ is any indication of the caliber of the works yet to come, then the D.C. area is in for quite a ride.

The year is 2063, and America is in serious trouble. The East Coast has flooded, forcing thousands of people to relocate, and forcing the White House to move to South Dakota, into Mount Rushmore itself. President Valentine faces war on two fronts; rebels within the nation, and African peacekeepers from without. And, known to only a few high-ranking officials, the additional threat of zombies, lurking in the basement of the White House itself. While it might sound a bit silly – and it undoubtedly is – it is also incredibly witty and highly entertaining.

The first thing that strikes you upon entering the space is Misha Kachman’s amazing set. The design in at once clean and ornate – not words often used in conjunction. The Oval Office design is beautiful, while jagged stone edges around the set lend support to the nagging feeling that something sinister lurks beneath the polished facade. This impression is confirmed later on when the entire set lifts up to reveal the zombie Congress living (or not) in the basements below. Kachman’s set is not only well-executed, it in essence becomes a character in its own right.

Woolly Mammoth’s cast is relatively small, with each actor playing multiple roles. Thankfully, the subtle differences between characters, as well as Jenny Cisneros’s excellent makeup design, made the transitions virtually seamless. Leading the pack is future Commander-in-Chief, Lord President Thom Valentine. Playing the lead role is Sean Meehan, who faces the challenge of playing the first gay U.S. President in a futuristic world at war and teeming with zombie threats. No small task that. Meehan rises beautifully to the occasion. At first charming and blithe, Meehan’s descent through slight eccentricity into outright madness is brilliantly orchestrated.

One of the most memorable performances of the night is Sarah Marshall’s turn as Lady Secretary of State Bloom. The former President herself, Bloom is a small, dour-faced, squeaky-voiced woman who is nonetheless a formidable force. Marshall’s performance is utterly delightful, whether she is being bullied by the Zombie Speaker for Zombies, or shooting pithy one-liners at the President. Clearly a fan favorite, Marshall is a powerful presence in the show.

As the leader of the African nations upon whom future America depends for its peacekeeping forces, Secretary General Abidemi wields a great deal of power. Dawn Ursula is more than up to the task. Her performance is so oddly delightful, so off-the-cuff and unpredictable, you can’t help but smile as you watch.

If there is a weak aspect to the show, it is the ending. A major sticking point, to be sure. Unfortunately, while the rest of the show is a silly, delightful, slightly cheesy work of art, the ending is a bit ham-fisted. The political commentary gets far too heavy-handed, and goes trampling over the plot. The numerous romantic subplots, which up until the end are light and entertaining, turn overly complicated, and lose all sense of plausibility. It is particularly irritating because the show seemed to be building towards something quite profound.

Regardless of the sticky end, the vast majority of the show is supremely entertaining. It features a widely talented cast and crew, taking on an innovative and refreshing new work. Woolly Mammoth’s Free The Beast initiative to foster brand-new works should be supported at every opportunity. If Zombie: The American is any indication of the caliber of the works yet to come, then the D.C. area is in for quite a ride.

Zombie: The American is running through June 21, 2015 at Woolly Mammoth, 641 D Street, Washington, DC NW (right off the corner of 7th & D). Tickets may be purchased online here.