1. Jumpers For Goalposts at Studio Theatre.

“This play is a gem. We in the DC Metro area are very fortunate to have the opportunity to see this U.S. premier production where everything comes together for a championship theater experience.” – April Forrer.

Synopsis: Hope springs eternal in the post-game locker room of Barely Athletic, an amateur soccer team competing in the five-a-side pub league in Hull, a Yorkshire fishing city that’s seen better days (as have these athletes). A hilarious and heartbreaking play about romance, resilience, taking chances, and moving on by the winner of Britain’s 2012 George Devine Award for Most Promising Playwright. 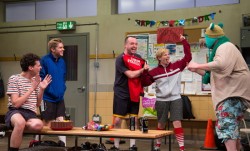 2. Last of the Boys at Fells Point Corner Theatre.

Synopsis: Ben and Jeeter fought in Vietnam.  For thirty years they have remained united by a war that divided the nation.  But this year, when they gather for one final hurrah, the past makes a return appearance and its many ghosts come flickering to life. This is a fierce, funny and haunting show about friendship, families and a war that, for some, never ends. 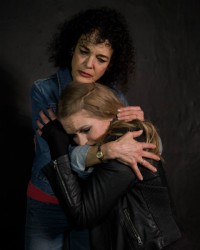 Katherine Lyons and Casey Dutt grieve for a departed soldier in “Last of the Boys”.

Synopsis: From Center Stage Artistic Director Kwame Kwei-Armah, comes a world premiere musical based on the life and music of Bob Marley. After surviving an assassination attempt in 1976, Marley left Jamaica for London, where he spent nearly two years in self-imposed exile. Chronicling the events surrounding this earth-shaking moment, Marley tells the story of a man transformed into one of the 20th Century’s most important cultural figures. Set in the soundscape of an era, this new musical weaves together the life and music of a man who, to heal himself, first healed his homeland. 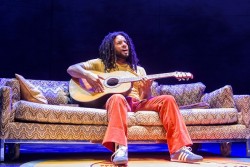 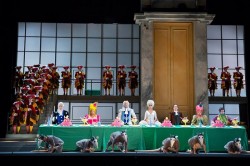 The cast of ‘Cinderella.’ Photo by Scott Suchman.

5. A Tale of Two Cities at Synetic Theater.

“The subversion here is possibly more radical than even some of Synetic’s traditional fare; but for daring audiences, the show is not to be missed.” – Andrew White.

Synopsis: Originally performed Off-Broadway to rave reviews by Everett Quinton, this irreverent comedy tells the story of a drag queen named Jerry who finds the baby at his door! To calm the child down, he enacts the entirety of Charles Dickens’s A Tale of Two Cities – playing all the characters himself! 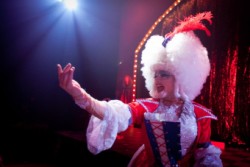