‘A Quick 5’ with Andy Einhorn 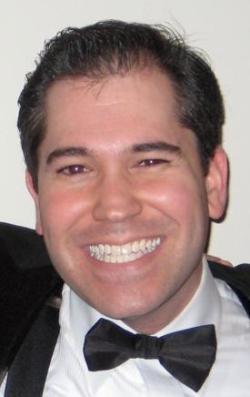 Andy Einhorn has one of the sweetest gigs in show business. Imagine going to work and getting to accompany and conduct for six-time Tony Award winning performer and theatre goddess Audra McDonald. Well, that job is a big part of Andy’s life and this Monday June 22nd you can see Andy conducting for Audra McDonald with the NSO at Wolf Trap.

Andy’s conducting debut on Broadway was the kind of show everyone would have wanted for their first. It was Sondheim on Sondheim at Roundabout Theatre Company and featured the legendary Barbara Cook. Now that’s what I call a debut. On Broadway Andy was also the musical director for Rodger’s & Hammerstein’s Cinderella most recently Bullets Over Broadway where he also served as vocal arranger. He also played keyboards for the latest Broadway revival of Evita and was the US musical director for Brief Encounter. As an orchestrator Andy has had a long association with composer Adam Gwon. His work can be heard on Gwon’s Ordinary Days and The Boy Detective Fails which debuted at Signature Theatre a few years back.

When you see Andy onstage with Audra McDonald it is a chemistry between singer and musician that only happens every so often. To hear Audra McDonald sing is a treat in itself but when it’s an arrangement by Andy Einhorn, it’s that much better. Make your Monday a little easier and catch Audra McDonald with maestro Andy Einhorn and the NSO at Wolf Trap. One crazy talented singer, and equally crazy talented conductor/orchestrator/accompanist and DC’s symphonic treasure is a sure bet for one fabulous evening.

How did you become interested in being a musician?

At around age seven, I recall coming home from school one day and telling my mother I wanted to take piano lessons. I distinctly remember watching the music teacher play piano and I studied her hands on the keys as her feet maneuvered the pedals. I had always enjoyed music from an early age, but this was a defining moment. I had also taken theater courses at the local Jewish Community Center and had fallen in love with singing and being onstage.

Can you please tell us how you came to be Musical Director for Audra McDonald?

Audra and I met through a connection at Houston Grand Opera and Rice University. A professor there, Richard Brown, was the local contractor in Houston and I found myself playing a lot of fun events during my time at Rice. I had also grown up working at the Opera as a child performer! He called me in late 2005 to ask if I was interested in coaching Audra on two one-act one-woman operas that were to be featured as a double bill in 2006. Obviously, I couldn’t say no to that opportunity. We hit it off and then about four years later, we started concertizing together and that tour was the basis for her latest album, Go Back Home. 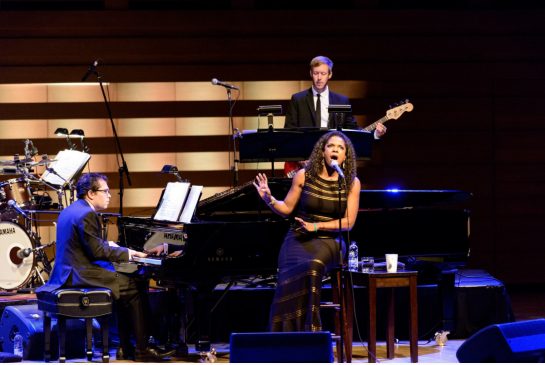 Audra McDonald with Andy Einhorn at the piano and Mark Vanderpoel on bass. Photo by Stuart Lowe.

Without giving it all away, can you please give us an idea of what we might hear in the concert with Audra McDonald and the NSO on June 22nd at Wolf Trap?

We like to joke that our concerts are like an evening in Audra’s living room. We offer a wide range of musical theater tastes, genres and decades! Something for everyone! You’ll hear everything from songs written in 1922 to songs recently composed in 2013. The joy of putting together our concert programs is to feature as much musical diversity to the give the audience an eclectic, but satisfying emotional program. We love Kander and Ebb, Sondheim, Rodgers and Hammerstein, but also love supporting up and coming composers like Jason Robert Brown and Adam Gwon.

You have conducted and or played on a number of Broadway shows. What do you consider to be a few of your Broadway career highlights thus far?

Do I have to choose just one!? Conducting Rodgers & Hammerstein’s Cinderella in 2013 was one of life’s greatest gifts. We had a twenty-one piece orchestra, large by today’s standards, and it was a true “pinch me” moment when I realized I was conducting the last “new” Rodgers & Hammerstein musical. Also, my first show, Sondheim on Sondheim was a dream come true. We had a fantastic cast including the legendary Barbara Cook. I have learned so much from people like Barbara and Audra and I’m a better musician AND person because of them.

What is your most favorite thing about conducting/accompanying for Audra McDonald?

Well as in all mediums of art, no two performances are alike. But with Audra, I have been lucky enough to find a collaborator who is always striving for excellence, challenging me, and forcing me to grow and become a better musician. Our symbiotic relationship has its ups and downs as any relationship does, but it’s strong and we push each other in the best possible ways. She breathes and sings like no one else and I can tell exactly where she is taking the phrase in a given song. That is a rare gift! She’s also very funny, a true joy to be around, and she puts up with my terrible jokes and pranks!