Theatre Review: ‘Don’t Drink the Water’ at Cockpit in the Court Summer Theatre 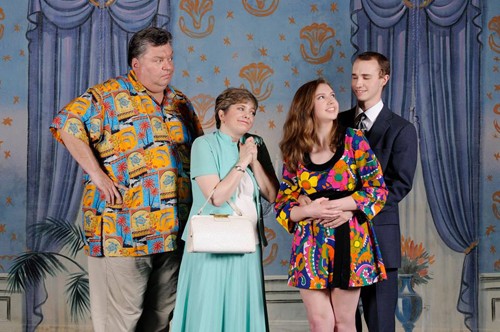 Remember the days of the Cold War, mimeograph machines and rotary phones? In many ways it seems like a much more innocent time. Don’t Drink the Water was Woody Allen’s first play produced on Broadway in 1966. Allen got more mileage out of the script when it was made into a movie with Jackie Gleason in 1969 and then remade as a TV film starring Woody Allen and Michael J. Fox in 1994.

“…the play has a quaint, nostalgic charm and the cast gives its all for laughs.”

The setting of this comedy is an American Embassy in the middle of an unnamed Communist country behind the Iron Curtain. If you grew up in that era, much of this will make sense. Now, it feels very dated and I am not sure that a younger audience would appreciate all the references. Fortunately Cockpit has a loyal and older following of theater goers and this show definitely appealed to them. During the scene changes, we were treated to oldies that tied appropriately into the action of the play. Do you remember Andy Williams’ “Music to Watch Girls By,” Johnny Rivers’ “Secret Agent Man,” and comedian Allan Sherman’s tribute to kids writing their parents from summer camp, “Hello Muddah, Hello Faddah” from 1963 (for which he won a Grammy for Best Comedy Album)?

The characters are like many we have been introduced to countless times since the 1960s, especially the “ugly American” stereotypes found in the loud, Hawaiian shirt-wearing caterer from New Jersey, Walter Hollander (the hilarious Chip Meister), and his long-suffering wife, Marion (the dry and funny Regina Rose). With their daughter, Susan (Morgan Wenerick), the couple is accused of espionage after innocently taking photos of a missile site. The family is forced to seek refuge in the American Embassy, followed closely by Krojack (John Rowe) of the secret police who determines that Walter’s estimates for catering an upcoming wedding are really troop movements and military supply costs.

The story is introduced and partly narrated by a priest (an amateur magician), Fr. Drobney (Tim Evans), who sought refuge at the embassy six years ago and never left. Also part of the embassy staff are a Russian assistant, Burns (Janet MacKenzie) and the temperamental chef (Jennifer Skarzinski) aggravated by the requests for “American” food from Walter.

Before the tourists enter the scene, Ambassador Magee (Albert J. Boeren, who also directs) is up for a run for governor and reluctantly leaves his incompetent son, Axel (Will Poxon) in charge instead of his very efficient, female assistant Kilroy (Emily Wessellhoff). Axel has been a disappointment to the diplomatic corps (and his father) by managing to get kicked out of every country he’s been stationed in so far. He clearly has a good heart but is simply inept.

Of course, Alex falls for Susan as soon as he sees her but she is soon to be married to her father’s idea of the perfect son-in-law – a lawyer. Susan is a novelty of her time as the feminist movement is beginning to blossom and is very independent. She soon reciprocates Axel’s affections. The young actors are very sincere and engaging.

Axel, with the help of Walter, bungles a reception for a visiting Sultan (Sam Ranocchia) and his first wife (Eve Grove, who also plays a countess and does a brilliant job coordinating the 1960s era costumes). Not to ruin the comedy, but Walter’s objections to the Sultan are valid and foreshadow future world politics. Matters get even more complicated when Walter jokingly admits to Krojack that he is an American spy after all. Not realizing that Krojack has recorded his admission, this causes an international incident. When a trade for one of the captured Communist spies for the family falls through, a plan is hatched to help the Hollanders escape.

Kudos to two long-time actors in the local community theater scene – Evans and Rowe. These gentlemen have a passion for theater and are still going strong doing what they love. In fact, 40 years ago, Rowe played the role of Walter in a previous production of Don’t Drink the Water.

If you grew up in the 1960s, remember TV shows like Hogan’s Heroes, the original James Bond films and long for a simpler time without cell phone and computers, this play has a quaint, nostalgic charm and the cast gives its all for laughs.