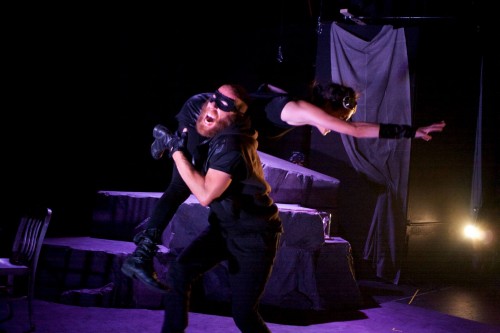 A whole lot of kicking and pummeling takes place in Flying V Theatre’s latest smashing production, Flying V Fights: Heroes & Monsters, but there’s no knocking the show itself. Flying V Theatre received the John Aniello Award for Outstanding Emerging Theatre Company at this year’s Helen Hayes Awards, and this first production since then should have every seat in the house filled. It’s not your usual theatre; not even your typical long story arch or tale of heroes and monsters (though the show packs in more references to popular culture than you might think possible without brining in the cheese), but it is theatre you do not want to miss.

Whether you are a longtime lover of theatre or you just enjoy a good fight or love yourself some comics and pop culture, this is the show to see.

An original production conceived by Jason Schlafstein and Jonathan Ezra Rubin and brought to life in collaboration with the cast and crew, Heroes & Monsters is a show almost entirely based on the language of movement: very few words are ever actually uttered. An overture at curtain up gives the audience a taste of the martial arts, fist fights, Acme explosions, zombies, vampires, superheroes, capes, daggers, and flying (oh my!) that take place. From there, the show winds its way through a series of loosely tied vignettes, which each explore themes of perception and transformation as heroes and monsters of all shapes, sizes, and kind rise and fall and interact with one another.

Each of the 13 pieces, set to a backdrop of music (or, as in the case of “Devil at the Bar,” the centerfold live violin playing of Jon Jon Johnson’s character in that bit), has its own dialect of violence, and the actors take on the form of fighting in that set and mold it to their individual character’s needs and motivations. As a result, not only is each piece intensely interesting and new, each of the many characters taken on by the actors is distinct and captivating. Violence is a key player in this battle pairing of heroes and monsters, and everything is subject to a trembling explosiveness–even the most innocent of gestures can hold the possibility of unleashed ferocity.

Tori Bertocci, Robert Bowen Smith, Jon Jon Johnson, Madeline Key, Lee Liebeskind, Megan Riechelt, Tim Torre, and Ryan Tumulty were the eight audacious actors who took on the many roles involved in a production of such separate vignettes. The 12+ different pieces each required their own unique cast of characters which the actors had to learn intimately and then comfortably engage in their intensely physical, non-verbal loquaciousness. They each did a magnificent job from hanging or jumping off the set ceiling, flying off stage, quietly grieving loss or playing other people to death, to puppeteering the most adorable teddy bear warrior you ever saw come to life and wanted to take home with you.

“Devil at the Bar” had me laughing the hardest, “Teddy” had me enchanted, “Date Night” was like watching my favourite kind of TV and “Hurt” had a story and execution so beautifully done that it had me in tears.

Whatever you are doing this month, make sure you include a trek out to Bethesda to discover the heroes and monsters who live and fight amongst us and maybe even in you (which you can document with the backdrop and props provided for photo-ops in the atrium). Whether you are a longtime lover of theatre or you just enjoy a good fight or love yourself some comics and pop culture, this is the show to see.

Flying V Fights: Heroes & Monsters runs through June 28, 2015 at The Writer’s Center, 4508 Walsh Street, Bethesda, MD. Tickets are $15 and available at the door or online.