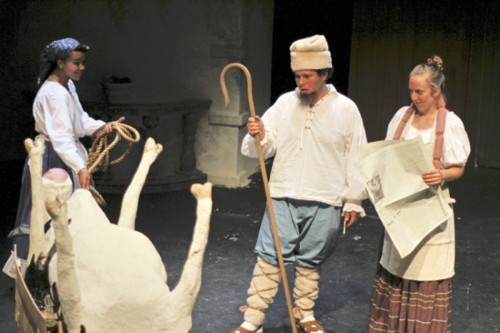 Jordan Wells as Yenchna the Vendor, Thomas DiSalvo (center) as Something Something Snetsky and Allison Frisch as Slovitch the Butcher. Photo provided by Parlor Room Theater.

“There’s no fool like a new fool,” says one of the characters, a simple shepherd who gives new meaning too the term “simple,” in Parlor Room Theater’s production of Neil Simon’s play Fools, directed by Frank DiSalvo Jr.

Staged in 1981, relatively late in the playwright’s career, this “comic fable” is set in the fictional small village of Kulyenchikov, Ukraine (Russian Territory), during the late 19th century.

The protagonist, Leon Steponavitch Tolchinsky, is a schoolteacher who enthusiastically comes to the town for his first official position. His excitement grows when he meets his pupil Sophia, daughter of Doctor Zubritsky and his wife Lenya. But extreme frustration is added to the mix when Leon learns that a curse placed on the village 200 years earlier has made everyone – well, stupid.

…one you’ll enjoy. Especially as presented by Parlor Room Theater, laughter is good for the soul.

In order to be with the lovely Sophia, Leon must either lift the curse within 24 hours or he’ll become like one of them. Kind of like, in a less-humorous vein, everyone in The Invasion of the Body Snatchers is taken over by a pod.

In spite of the fact that the name of Neil Simon—arguably America’s most prolific and honored playwright—is connected to it, Fools is, alas, not very good play. Theater mythology has it that when Simon was divorcing his second wife, she asked for a percentage of the profits from his next play. So, much as in The Producers, he set out to write a flop.

Whether the story is true or not, Fools played a mere 40 performances on Broadway, even with such talent as John Rubinstein in the lead and direction by Mike Nichols.

But there is a caveat. Fools may seem a lot more amateurish than The Odd Couple or Come Blow Your Horn or certainly than Simon’s Pulitzer Prize-winning Lost in Yonkers, but it’s also very funny.

You’ll realize quickly, as a New York Times reviewer pointed out after the original production of Fools that it’s hard to make people appear utterly stupid if they’re also communicating and it’s also hard to believe that nearly all the characters in a play—not just one “ditz”—can be that dumb. But you also may not care a bit, because you’ll be too busy laughing.

It’s also fun being introduced—for those like me who may not have known them before—to Parlor Room Theater, a professional group of young actors founded in 2006 by Frank DiSalvo, Jr., who also directed this production.

The audience attracted at the June 25 by itinerant theater company, which performs at various locations, was relatively small, but it was a positive one, despite a brewing storm outside.

The black box theater that houses the current production is perfect for the simple (no, not stupid!) sets, breaking the fourth wall, and occasional forays by actors into the audience. It was also a clever touch to have a panel along one wall containing stylized 3-D onion domes that typify Russia. Maybe the only down side to the space is that the actors sometimes overshot their marks by speaking more loudly than is necessary.

DiSalvo is very young, but has a sure hand and clear vision in working with his actors in what is partly a family affair. And they bring as much enthusiasm to the task as Leon feels about his job and pupil.

As Leon, Dillon DiSalvo has a smooth face on which every emotion—love, rapture, confusion, desperation, strong will, and faked stupidity-registers clearly. He’s a delight to watch.

Sarah Pullen makes a lovely Sophia, who teaches her teacher a thing or two about emotional intelligence even before the curse is … well, I better not reveal the somewhat-forced but funny ending.

Phil Dickerson and especially Kathryn Barrett-Gaines give strong performances as her not-really-a-doctor father and his dolt (even compared with the other characters) of a wife. The chemistry between them is appealing.

Thomas DiSalvo is the shepherd, who has misplaced his first name along with the sheep. His lost look will linger with you.

Other actors adding to the fun as hopeless townspeople are Allison Frisch, as Slovitch the Butcher, who turns a cow upside down to get cream; Sean James as Mishkin the Postman, who can’t find addresses; Jordan Wells as Yenchna the Vendor, who sells fish that look suspiciously like flowers; and Steve Rosenthal as the Magistrate, who walks around announcing the time.

They bounce off each other well and provide many of the laughs.

Jesse Marciniak might be having the most fun as the dashing but egotistical villain, Count Gregor. His ancestor was the one who placed the curse, which can paradoxically be removed only if Sophia stupidly marries him.

Ember DiSalvo designed the set and costumes, while Grant Hill is responsible for the lighting. Patrick Gorirossi stage-managed.

Drawing on a little of Romeo and Juliet, the Lerner and Loewe musical Brigadoon, Russian literature, and the tales of the Wise Men of Chelm (an oxymoron), Simon has fashioned a play far from his best, but one you’ll enjoy. Especially as presented by Parlor Room Theater, laughter is good for the soul.

Running Time: One hour and 50 minutes, with one 10-minute intermission.