Theatre Review: ‘Mary-Kate Olsen is in Love’ at the Studio Theatre 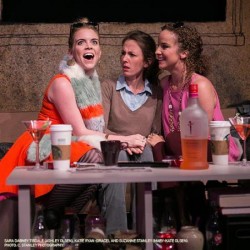 Mary-Kate Olsen is in Love is a zany, pot-hazed, half dream, comedic production now playing on the intimate 2nd Stage at Studio Theatre. Written by Mallery Avidon and under the excellent direction of Holly Twyford, the show gives us the story of Grace, a young woman who has everything she should need to make her happy:  good education, marriage to her high-school sweetheart, a great income (not to mention great earning potential!) and more. Only problem? She isn’t happy. In fact, Grace is so miserable that after endless nights of falling asleep on the couch watching TV alone while her perpetually stoned, jobless husband plays Call of Duty: Modern Warfare, the hip, have-everything Olsen sisters start showing up at her house and in her mind like they are her new BFFs. Grace is just “the right kind of average” to be useful to Mary-Kate and Ashley as they do market research for her demographic–“27-year-old, college-educated women, with high-paid and unfulfilling careers in deeply dysfunctional, unsatisfying, loveless marriages, who want to fill the holes in their lives by shopping!”

This show…should certainly be a trippy and thought-provoking experience.

Katie Ryan presents a deeply compelling Grace as she struggles to figure out why she is so miserable. When Mary-Kate, played by Suzanne Stanley, suddenly decides she is in love with Grace, the two run off together to the certain promise of paradise and happiness at last. Grace’s husband, Tyler, played by Daniel Corey, is left behind to face his own life disappointments–jobless, abandoned by his wife, with nothing going for him except a soldier, played by Christian Gibbs, who seems like he may have materialized out of the game, but with all the pot, who knows!

While the play could easily have settled its criticism on empty commercialism or a bad marriage, it takes a different turn. No matter what choices Grace makes, no matter how far removed and irretrievable her old life becomes during the course of the production, she can’t find happiness. All of the actors moved brilliantly through the dreamscape world and across a panorama of emotions as the story unwinds, and more than once I was taken aback by an event (bring a tissue!) or the intensity of the seemingly candid questions their characters raised.

Between the pot smoking and the imaginary friends, Mary-Kate Olsen is in Love freely plays with perceptions and reality vs. unreality. Even the set construction with its backdrop of billowing canvas and cartoon imagery sharpens the contrast of real vs. unreal, and the interruption of action by “amazing women” singing a capella style and taking turns talking about what their (lofty) dreams are–which slowly crumble under harsh reality–increases the dreamlike qualities of the show.

While I could tell that Mary-Kate Olsen is in Love was full of amusing and potent cultural references that I didn’t get as an International, this lack of understanding did not undercut the production. Mary-Kate Olsen is in Love not only takes a brilliant look at what it means to be a woman in this world, but also examines the expectations that are built up through childhood and into enormous, crushing weights that can evoke a disastrous dissatisfaction and deep-set sense of meaninglessness in adulthood. This is an angsty play that slowly strips every layer of Grace’s life away until there remains only her deepest self, and it is on the construction of self and the shaping of identities today that the play’s focus seems to lie. This show is definitely reminiscent of the film, Across the Universe, and should certainly be a trippy and thought-provoking experience.