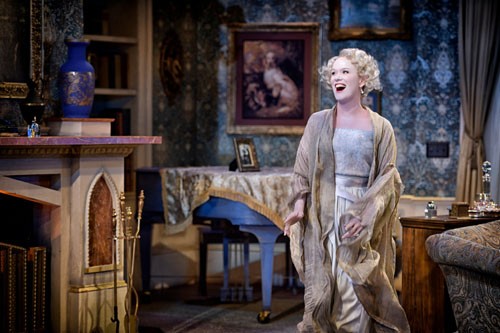 Everyman Theatre is wrapping up its season with the sparkling and ethereal British comedy, Blithe Spirit. It was one of the most successful plays of its time and has spawned countless revivals since thanks to a master of razor sharp wit, Noel Coward. Founding artistic director Vincent M. Lancisi, who also directs, has put together a brilliant cast comprised of company members and local talent.

‘Blithe Spirit’ a refreshing and lighthearted send-off to another great year of theater at the Everyman.

The story centers on Charles Condomine (Bruce Randolph Nelson) and his second wife, Ruth (Megan Anderson) who are about to hold a séance conducted by the eccentric and sturdy, bicycle-riding Madame Arcati (DC’s Nancy Robinette). A skeptic, Charles is using the séance as research for his new book. When Arcati actually conjures up the spirit of his first wife, Elvira (Beth Hylton) – whom only Charles can see and hear – the hilarity begins.

Joining them are the local doctor Dr. Bradman (Carl Schurr) and his wife (Helen Hedman). The two actors fulfill their roles as the stereotypical upper class British couple perfectly even though they are not given much to do. Julia Brandberry is a hoot as the overly enthusiastic maid, Edith, who dashes about the house at lightning speed to fulfill her duties.

Robinette is simply a gem as Madame Arcati and steals every scene with her wry and nuanced comic timing. She completely embodies a role that could easily be over-acted in lesser hands. As Elvira, Beth Hylton is an exquisite ghost with her pale, 1920s curly bob and a stylish costume in various shades of white, flowing fabric. She floats and flutters around the set, joyously creating mischief as a number of mysterious accidents begin to occur.

It is sheer fun to watch Bruce Randolph Nelson who is so adept at the verbal volleying with his two wives as well as physical comedy. Though Anderson’s accent doesn’t quite feel as natural as the other actors, she holds her own in this comic love triangle as a prickly contrast to the ephemeral, childlike Elvira.

Though the play was written in 1941 during WWII, this staging of Blithe Spirit takes place in the 1920s as the jazz age is emerging. This decision gives extra zing to the production. Sound designer Stowe Nelson treats the ear with the music of the era (appropriately incorporating a jazzy harp) and his work complements Lewis Shaws’ clever special effects and Jesse Belsky’s lighting design. Together they offer up some surprising and magical moments.

David Burdick’s costumes are glorious. One example is a lounging outfit worn by Ruth that literally and beautifully illustrates the Japanese influence on the fashion of the period. Set designer Daniel Ettinger continues to fill the eye with stunning detail and beauty with his larger-than-life English drawing room setting.

Blithe Spirit a refreshing and lighthearted send-off to another great year of theater at the Everyman.

Running Time: Two hours and 45 minutes with a 15 minute intermission.