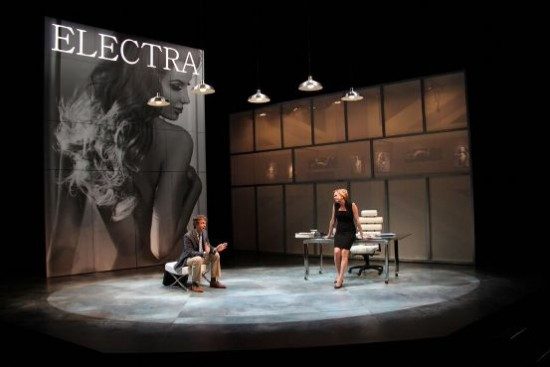 Round House Theatre concludes its 2014/15 season in a big way with an American premiere of a play which tackles a topic that I don’t think has been explored onstage before. I am referring to the adult entertainment business. We’ve seen it depicted on screen in such films as Bob Fosse’s Star 80 and The People vs. Larry Flynt. Playwright Lucy Kirkwood’s NSFW (Not Safe for Work) not only goes inside the industry, it actually and rightfully holds it accountable for its exploitation of woman in a play that is biting and thought provoking at the same time.

NSFW is an important play presented to its full potential at Round House Theatre…. JUST GO!!…. That is all.

The play’s first two scenes are set in the London offices of Doghouse magazine, which is a typical sleazy adult publication that features young girls bearing all on its covers. Aidan (James Whalen) is your stereotypical sleaze ball owner who can pretty much justify, in his head at least, that there is nothing wrong with what his magazine represents and will do anything to keep it running.

His employees include a sex obsessed Rupert (Danny Gavigan) but there are also two folks that just want to make an honest living. We have Charlotte (Laura C. Harris) that just needs the work and Sam (Brandon McCoy) who even though is looking to get ahead in the industry, doesn’t let his principles get in the way. Because of this he is stuck as Aidan’s coffee boy. Things hit the fan when it comes out that Doghouse’s latest cover girl is only fourteen years old. Even though there was a consent form signed, we come to find that it was forged by the girl’s fifteen year old boy friend who submitted the photos. The girl’s father Mr. Bradshaw (Todd Scofield) finds out and demands a meeting with Aidan. During the course of the meeting Aidan tries to turn the situation around by accusing Mr. Bradshaw of not being able to control his daughter while offering him 25,000GBP hush money. You’ll have to see the show for the outcome, but I’ll just say Aidan shows his true colors throughout the exchange.

Scene three shifts to another adult publication named Electra which is run by Miranda (Deborah Hazlett.) This magazine exploits woman in another way by convincing them they have to have the perfect body. Amidst the scandal at Doghouse, Sam has been fired and is now applying for a job at Electra. What follows is a total departure from scenes one and two as Kirkwood’s play goes from dark comedy to brutally serious drama. The section of the scene which shows Miranda dressing for an event while appropriately underscored by Queen’s “Somebody to Love,” kind of sums up everything Kirkwood is trying to say.

Director Meredith McDonough directs Kirkwood’s script at a good clip and while scene 3 might feel a bit longer to you than scenes one and two, by the end of the show you will understand why this is.

From top to bottom (not intentional) the cast is nothing short of fantastic. James Whalen’s Aidan perfectly shows us the scummy way these adult entertainment executives think and to say. Saying Whalen commands the stage is stating the obvious. His performance might very well be one of the best of the season.

Todd Scofield as Mr. Bradshaw gives a powerful performance as the father that wants an apology from the industry that has forever embarrassed and humiliated his daughter. Whether you are a parent or not, you can’t help but feel moved by Scofield’s performance.

Danny Gavigan as Rupert is funny and sick at the same time. He only has one thing on his mind and feeds Aidan’s obsession. Gavigan, who I’ve seen play a number of dramatic roles, proves with this show that his comedic side is just as good. He is truly one of the area’s most versatile performers.

Laura C. Harris’s Charlotte and Brandon McCoy’s Sam both poignantly paint portraits of two people getting caught up in the shenanigans of the business while just trying to get ahead and make a living. Harris and McCoy are as usual stellar performers and give the kind of portrayals that perfectly capture their characters.

Last but certainly not least we have Deborah Hazlett as the manipulative and sometimes hypocritical Miranda. Here is a character that thinks one way but isn’t necessarily what is on the surface herself. Hazlett’s performance makes for a good character study to be sure.

The production elements match the performances. Tony Cisek’s clever sets depict both magazine offices and the shift from one to the next shows what happens when you have a precision crew working on your production. The shift in lesser hands could have been endless and awkward while waiting for it to complete but Round House’s techs make it look seamless.

Eric Shimelonis’s sound design has a British beat to it throughout. There isn’t a lot of music in the show, but when it is present you certainly feel it is  a welcome addition.

Overall NSFW is an important play presented to its full potential at Round House Theatre. What a great way to end the season and bravo to Artistic Director Ryan Rilette for pushing the envelope. JUST GO!!…. That is all.