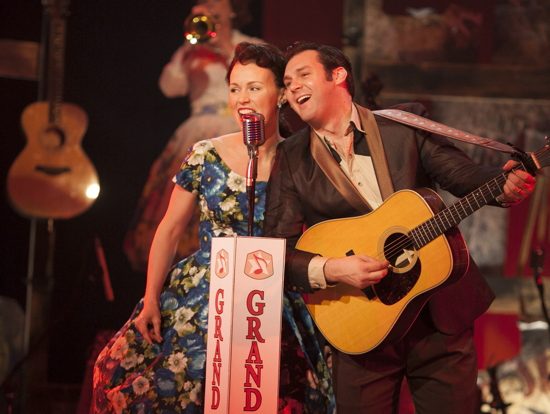 Infinity Theatre Company has strived to bring New York City worthy talent to Annapolis since 2010: a promise that the company certainly fulfills with the ongoing production of Ring of Fire: The Music of Johnny Cash. The musical, complete with music and stage direction by Amy Jones, features a delightful mix of Johnny Cash’s best and most memorable songs to convey the rebellious life of the “Man in Black.”

William Meade adapted the show— originally written for Broadway by Richard Maltby, Jr.— into the production that it is today. Rather than casting a crew of actors to play the various individuals from Cash’s life, Ring of Fire cleverly introduces five characters, seemingly unaffiliated from Cash. However, through music, instrumentals and storytelling, the five easily take the stage to elaborate and act upon the various phases of Cash’s stardom.

As a whole, the cast performs phenomenally. An unseen orchestra is nonexistent for this production, as the actors serve as both the characters and the musicians. I was in awe of how eloquently the cast lugged around each instrument— from the small triangle to the bass that was similar in size to the female characters. Jones directed the orchestra flawlessly, as the instruments often tell the story just as clearly as the actors can.

Katie and Lori, Katie Barton and Lori Eure (respectively) performed strikingly. Barton often portrayed June Carter Cash, and her hilariously soulful rendition of “Flushed from the Bathroom of your Heart” left me in stitches. On the other hand, I often found myself anxiously waiting for Eure to take the stage with a solo, because her singing is that good.

Ben, played by Ben Hope, also deserves recognition for his portrayal of Johnny Cash. First of all, his chemistry with Barton is fun to watch, and he makes the rockstar appear fantastically relatable. His stunning rendition of “Sunday Morning Coming Down” allows for Cash’s struggle with depression to be handled somewhat harmonically.

With that said, I applaud how well Meade and Jones handle the depression and drug downfall that appears within the second act. The characters discuss Cash’s drug usage in a surprisingly classy manner, and they truly articulate how easy it was for any given rock star from the 50s and 60s to, regretfully, stumble down a poor path.

Paul Tate DePoo III designed the wooden set with various Johnny Cash newspaper headlines. In a strange way, the set reminded me of the inside of a Hard Times Café: rugged, yet skillfully crafted. The lighting, designed by Infinity Theatre veteran Jimmy Lawlor, is intelligently placed throughout the musical to add a certain ambiance to each musical number.

As the sole percussionist on stage, Chris Karabales keeps the beat going throughout the show. I applaud him for being the only musician on stage unaffiliated with the five main characters.

Ring of Fire: The Music of Johnny Cash is a show that left me, a kid born in the 1990s, humming “I’ve Been Everywhere” for the remainder of the evening. With that said, this musical is a good time for any fan of Johnny Cash, or any fan of great music.

Running Time: Just under 2 hours including a 15-minute intermission.

Advisory: This musical contains some language, sexual innuendo and drug references. Not intended for children.