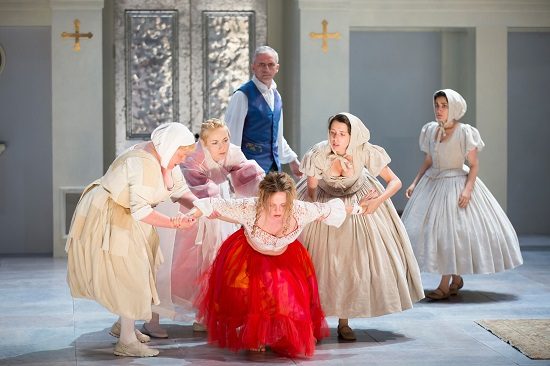 Tartuffe, David Ball’s sleek adaptation of Moliere’s classic skewering of a scumbag grifter hiding under the skirt of piety, receives a gloriously wicked co-production with South Coast Repertory and Berkeley Repertory Theatre at Shakespeare Theatre in its Sidney Harman Hall.  Brilliantly directed by theatre master Dominique Serrand, co-founder and former artistic director of the renowned Théâtre de la Jeune Lune, the production strips away all the pretense about pretense and evokes stunning relevance to our present age of great lies.

With a finely balanced cast, Director Serrand deliciously eviscerates fools and hypocrites alike. Truth and the tellers of truth are the truly heroic here, and Suzanne Warmanen’s gloriously insubordinate servant Dorine speaks for all of us who fancy ourselves undeceived by the charlatans among us.  Significantly, it is Warmanen’s reality-based Dorine—who doubtless does the real heavy-lifting in the household—who best sees Tartuffe for the opportunistic hypocrite that he is and has the intestinal fortitude to bellow at her boss that the Emperor has no clothes.

The genius of Ball and Serrand’s Tartuffe is in the irrefutable precision and persistence with which the actors surface the deeper implications of the play’s actions.   In mesmerizing displays of physical acumen, the actors again and again give visual spectacle to the absurd lies and complicities through which Tartuffe masterfully executes his treachery.

The great British atheist philosopher Bertrand Russell, in a book entitled An Outline of Intellectual Rubbish: A Hilarious Catalogue of Organized and Individual Stupidity that could truly be a companion volume to Ball’s Tartuffe, tells the story of how Benjamin Franklin was condemned by the George III and the religious extremists of the day for inventing the lighting rod.  Lighting, proffered these pious fools, was God’s vengeance on sinners, and Franklin’s device was a blasphemous interference with God’s will.  We hear Moliere’s Tartuffe, silver-tongued Devil that he is, mouthing equal nonsense much like the Westboro Baptist Church of today.

Ages before the coronation of social media as the supreme reality above all realities, Moliere’s Tartuffe was a genius at crafting a self-aggrandizing “brand.” Indeed, played with virtuosity, precision and punch by master actor Steven Epp (co-founder with Serrand of The Moving Company), this Tartuffe reminds one of recent research that finds a sizable percentage of the world’s CEOs are, in fact, certifiable psychopaths who “lack empathy and guilt, are coldhearted, superficial, manipulative, impulsive or irresponsible.” Add to this Aristotle’s premise that “A tyrant must put on the appearance of uncommon devotion to religion” and convince his subjects that he has the gods on his side, and linguist Noam Chomsky’s (arguably the most widely read author in the world today) biting observation that “Pretend to be a religious fanatic and you can pick up a third of the vote right away,” and the audience sees the breathtaking relevance of Moliere to our times.

Indeed, as the saying goes, a fool and his money are soon parted, and as the patriarch Orgon, Luverne Seifert plays the very essence of a fool, a sycophant drunk with adoration for Tartuffe. Seifert’s Orgon fawns over his idol with more than a dollop of eroticism while gleefully betraying his family and friends.  Indeed, Seifert reveals the venality and solipsism of Orgon’s heart turned stone against his obedient daughter, honor bound son, faithful wife, honest brother-in-law, and loyal servant Dorine. One marvels at how Orgon’s infatuation with Tartuffe unleashes his true nature as never before—he becomes an insufferable pedant, a tyrannical father, and his loved ones would be forgiven for not forgiving him after all.

As Orgon’s daughter Mariane, Lenne Klingaman shines as the neurotically parent-pleasing dutiful daughter too conflicted to rebel and too disgusted to comply with her father’s command that she marry Tartuffe.  Her confrontation with her father over his plan to marry her to Tartuffe resonates only too acutely with cultural clashes today.

In one of the production’s most hilarious crescendos of style, Klingaman and Chrisotpher Carley, as the love-struck couple Mariane and Valere, cringe and prance and pounce on each other like a tropical bird mating dance too astonishing to believe.  Sex and seduction being at the heart of any good farce, Serrand also gives us an extraordinary early flirtation scene between Tartuffe and Orgon’s wife Elmire.  Eloquently played by Sofia Jean Gomez, Elmire—who is clad in the most sensational blue satin gown that by itself is worthy of a Best Costume award for designer Sonya Berlovitz—captivates as well as in this visual feast of unexpected choreography.  Epp’s Tartuffe slithers along the floor, freezing in impossibly acrobatic poses to deliver his swaggering innuendos.  Gomez’s Elmire coquettishly melts onto the floor in her blue dress and floats across the stage on its beautiful balloon.  Gomez brings a triumphant combination of steeliness and feminine guile to the role, though one wonders whatever she could see in the pompous Orgon. In Elmire and Tartuffe’s second scene together their comic dance turns dark and all too real.

As the voice of reason and worldly wisdom Orgon’s brother-in-law Cleante, Gregory Linington brings both gravitas and a glimmer of objective hope to this hopelessly doomed household.  In his glimmering great coat and dignified posture, Linington anchors the play in the world beyond the formidable doors.  As Orgon’s son Damis, whose impending marriage to his beloved rests with his sister’s marriage to her beloved Valere, Brian Hostenske brings an anguished intensity as his future happiness comes crashing down before him, thanks to his father’s blind devotion to Tartuffe.

In a master stroke of physical theatre Nathan Keepers and Ross Destiche play Tartuffe’s predatory attendants who circle the family like sharks hungry for blood.  In silence, they slither and preen over, around, above, and behind the foreground action, foreshadowing the ultimate malevolence of Tartuffe’s end game.  Special applause to Nathan Keepers (who is also Assistant Director) as the attendant Laurent, Tartuffe’s second, who gives every slow movement, every pose and gesture a chilling malice.  Indeed, near the play’s end, Keeper’s Laurent delivers the production’s most horrifying moment as he pronounces that the family, through Orgon’s idiotic compliance, must vacate the premises with all deliberate speed.  In parallel angular grey garb, Destiche’s fellow attendant echoes the subtext, adding resonance to this captivating stylized element.

As Orgon’s mother Madame Pernelle, the draconian fundamentalist who early on sets the tone of pious absurdity, Michael Manuel nails the ridiculousness of her devoutness and brings a welcome comedic quality to the wheelchair bound role.  Manuel returns at play’s end to similarly nail the king’s officer, who executes the play’s dénouement with the king’s official condemnation of Tartuffe as a criminal charlatan—apt justice we’ve all been yearning for.

Director Serrand has two servant girls, delightfully played by Maria Leigh and Stephanie Schmalzle, ever at the ready, skittering in and out in anticipation of Orgon’s every whim.  A final attendant, played solidly by Michael Litchfield, appears at play’s end to take Tartuffe off in chains.  Tartuffe, however, in character to the bitter end, treats his arrest as a Christ-like persecution, remaining ever ready to deceive his next mark.

Director Dominique Serrand co-designed, with co-scenic designer Tom Buderwitz, a majestic hall, a grand room of creamy white walls and sunlit windows, complete with holy water and a great, fortress-like silver door.  Costume designer Sonya Berlovitz has created a gorgeous bouquet of garments that each evoke the essence of character, from Orgon’s Puritanical white-trimmed coat to Mariane and Valere’s farcical lovers’ plumage, to the attendants’’ elegant, fin-like grey layers, and, of course, Tartuffe’s flowing gray tunic with its come-hither open chest panel revealing actor Epp’s ripped chest below. Lighting designer Marcus Dilliard fills the space with crisp shadows and the soft light of sunrise and sunset as the reign of Tartuffe rises and falls.

A standing ovation to director Dominique Serrand and script adaptor David Ball and the magnificent cast, designers, and crew.  This Tartuffe will have you lusting for truth beyond even the most seductive of lies.