Theatre Review: ‘The Comedy of Errors’ at Chesapeake Shakespeare Company 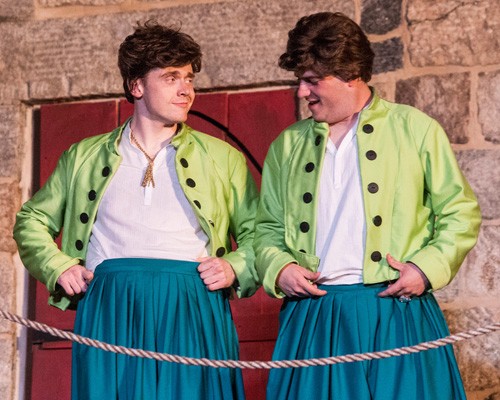 In Shakespeare’s ‘The Comedy of Errors,’ two sets of twins who have been separated since childhood are reunited through a series of mix-ups. Matthew Ancarrow (left) and Robby Rose (right) are the twins named Antipholus.
Photo by Teresa Castracane.

CSC has been performing summer shows “In the Ruins” of Patapsco Female Institute Historic Park since 2003. This is the CSC’s third production of the Shakespeare comedy and it is full of interesting twists and lots of laughs, performed in a beautiful setting.

The story centers on twin brothers, both given the name Antipholus. They coincidentally have another set of twins as their servants – and both are known as Dromio. Aegon (Frank Mancino) is a merchant from Syracuse who is in search of his wife and his other twin son in the city of Ephesus. Both sets of twins were separated 25 years ago in a shipwreck. Aegon has been arrested because of the ban against travel between the two cities but the Duke (Kate Forton), moved by his tale, has given him a day to raise the ransom to avoid execution.

…full of interesting twists and lots of laughs…

His lost son, Antipholus (Robby Rose) has grown into a prosperous and respected citizen in Ephesus and is married to the insecure Adriana (Mary Myers). Her single sister, Luciana (Carson Elizabeth Gregory) lives with them. The farce is heightened by the fact that HIS Dromio (Bobby Henneberg) is tall and round while his twin is played by the tiny actress, Kelsy Painter.

The hilarity begins when, unbeknown to Aegon, Antipholus (Matthew Ancarrow) and Dromio of Syracuse visit Ephesus. Adriana mistakes the wrong man for her husband and the situation is further complicated when the single Antipholus falls for her sister. Meanwhile Adriana’s real husband has been arrested for not paying Angelo (James Jager) for a gold chain the merchant has given to the other Antipholus. Both servants get a lot of abuse for things that they were or were not supposed to do as each is mistaken for the other.

CSC has regularly incorporated modern songs relating to its production during its pre-show and intermission. In this interpretation of Comedy, the music is very integral, almost another voice, commenting on the action. A small band sits on the top level to the left of the stage as various actors come and go, performing on various on instruments as well as singing during the production.

A very interesting element has been incorporated into this show – the addition of two full-blown musical numbers. If there “ever was” (excuse the pun) a contemporary song that fits the plot, it is the 1980s hit, “Once in a Lifetime,” by Talking Heads. First embracing his role as the mistaken husband, Antipholus of Syracuse literally starts to freak out – a Snickers, anyone? The lyrics are eerily applicable. I recommend you look up the lyrics to the entire song but here is a sampling:

The Comedy of Errors had also been made into a musical (book and lyrics by none other than Trevor Nunn with music by Guy Woolfenden). The London West End production went on to win the Olivier Award for Best New Musical in 1977. When Adriana thinks her husband has gone mad, she asks Dr. Pinch (Tim R. Bintrum) to perform an exorcism. The director has used a number, “Satan Come Forth,” from that show. Musical director, Scott Farquhar, negotiated the use of the song with the publisher who happens to be Guy Woolfenden’s wife, Jane. Nellie K. Glover contributes fun choreography to the two numbers.

Technical director/set and lighting designer Daniel O’Brien has done a yeoman’s in job creating a multilevel set with steps and a series of doors with peekaboo panels and blending perfectly with the remains of the Civil War-era girls’ boarding school. The first level is treated as an outdoor café with two sets of tables and chairs. Characters periodically beckon a server who brings assorted libations throughout the evening – everything from water to Starbucks to Jack Daniels. Perhaps the liquid break is a welcome necessity for the actors in this high energy, slapstick treatment performed on a warm summer’s evening. The door on the first level serves as both a dungeon and a disco, frequently spewing out actors, smoke and a familiar disco club tune.

CSC Associate Artistic Director Scott Alan Small has gone unapologetically campy, directing this comedy in broad strokes and slapstick with many modern references. As described by Founding Artistic Director Ian Gallanar, this production “links the traditions of the Classical Era (Roman Comedy) to the Golden Age of English Theater, and then…to contemporary art.” This treatment is supported by the simple, brightly colored costumes and outlandish wigs created by Heather C. Jackson and Haley Raines Young, respectively.

The cast overall is solid but there are some notable performances. As Antipholus of Syracuse, Matthew Ancarrow is simply brilliant, with superb comic timing and command of physical comedy. Kelsy Painter is small but gives a mighty performance as his servant Dromio. Myers and Gregory do a wonderful job as the sisters, Adriana and Luciana. Jeff Miller has a ball in multiple female roles –a kitchen maid, an abbess – to name a few. Clearly this very tall, male actor was not made up to be a beautiful woman which only adds to his characterizations. (Cue The Kinks’ classic, “Lola.”)

The usual audience interaction is even more prevalent in this production. Judging from the giggles and laughter from both the children and adults in the audience, this show is a real crowd pleaser for all ages.

The Comedy of Errors by William Shakespeare is playing through July 19, 2015 at the ruins in Patapsco Female Institute Historic Park, 3655 Church Road, Ellicott City, MD 21043. Tickets can be purchased online.