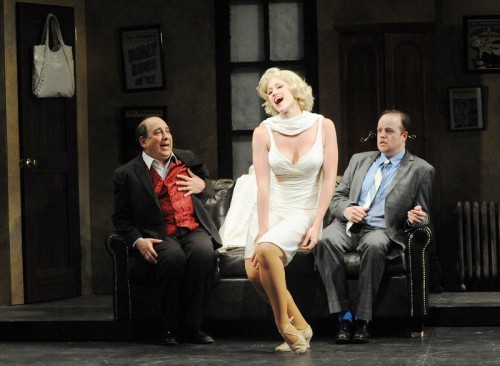 In a turnabout from its previous musical that offered the relatively sober Carousel, Olney Theatre Center, in the midst of its 77th season, is currently mounting the gregarious, laugh-a-minute production of The Producers.  It is clear from the get-go why this musical captured a record-breaking 12 Tony Awards in 2001 and spawned numerous other productions worldwide as well a successful film in 2005.  The hilarity, high-jinx and gags keep the audience laughing throughout with never a dull moment to be had.

Mel Books and Thomas Meehan adapted the musical from the 1968 movie with the same name. The music and lyrics were composed and written by Mr. Brooks who turned 89 the day following the opening night performance at Olney.  His comedic genius along with Mr. Meehan’s assistance on the book is stamped on every line, every lyric, and every movement.

Under the expert direction of Mark Waldrop, who stays true to the original show (and why not?), the company and crew does this iconic show justice in every facet and is among the very best productions that Olney has staged in years.  The Producers is unapologetic in its irreverence towards Nazis, gay people, the elderly, and Broadway folks, especially producers.

If you enjoy a laugh or two, come prepared for a hundred.

The story centers on producer Max Bialystock, a once “King of Broadway” who has recently reeled off a series of stinkers and seems washed up.  He hooks up with a ridiculously timid accountant but Broadway producer wannabe named Leo Bloom to create a scheme whereby if they raise sufficient advance money from “little old ladies” they can personally reap the benefits if the show flops.

So what do they do? Bialystock plays along with the naughty role-playing, sex-starved, lonely old ladies in exchange for their “check-ie” (made out to Cash—the name of his next show as he tells them) while both new partners seek out the worst play ever, the worst director, and the worst actors in New York.  They select a play called “Springtime for Hitler” and with half the audience expected to be Jews, the musical version is sure to tank after one night.

Except the reverse occurs; the show becomes the rage of Broadway and what happens next in The Producers’ story I’ll leave untold for the audiences to enjoy.

In a tour de force, veteran actor Michael Kostroff whom many may recognize from his five seasons on The Wire and Michael Di Liberto are simply brilliant in portraying Max Bialystock and Leo Bloom, respectively.  Each role requires precise timing in delivering lines, singing, dancing and much comic physicality throughout.

These are strenuous roles, and it’s fair to say there is little drop-off in the quality of their performances compared to their ultra-talented Broadway predecessors in The Producers, Nathan Lane and Matthew Broderick.  Rather than attempting to mimic the star duo, Mr. Kostroff and Mr. Di Liberto with Director Waldrop’s guiding touch successfully put their own imprint on the characters. Their onstage chemistry is remarkable.

Among the several superb duets in which they perform is one of the show’s bigger numbers, the snappy “We Can Do It.” They are also hilarious with Stephen F. Schmidt, who plays Franz Liebkind, the Hitler-adoring writer of “Springtime for Hitler,” in “Der Guten Tag Hop-Clop.”

In one of The Producers many memorable moments, Mr. Kostroff’s rendition of “Betrayed,” in the second act flawlessly summarizes the show’s plot in rapid fashion.

While the opening night production contained a couple of minor hiccups involving props and a member of the ensemble stumbling, Mr. Kostroff cleverly ad-libbed to turn the small mishaps into comedic moments.  And with this being his sixth turn at Max Bialystock in his career, that vast experience added polish to Mr. Kostroff’s performance.

There are other outstanding cast members (as well as the ensemble) that contribute to the production’s excellence.  Jessica Jaros as Ulla, the gorgeous blond Swede who entered Bialystock’s office to hope for a part in his next play, shines throughout.  The delivery of her comedic lines is spot on, her accent is consistent, and her vocals in “When You’ve Got It, Flaunt It” are superb.  Her interactions with the male leads are hilarious, especially with Mr. Di Liberto’s Leo Bloom character.

Mr. Schmidt plays his Franz character with gusto but he slightly overplays his German accent to a point where it affects clarity.  Nonetheless, he’s a funny character donned in a Nazi uniform, iron helmet and maintains a flock of pigeons on the roof of his apartment.

Jason Graae as the director of “Springtime for Hitler,” Roger De Bris and his “common-law assistant” Carmen Ghia, played deliciously by Robert Mintz, are flamboyantly gay and are a hoot.  Their side-splitting number, “Keep It Gay,” with other members of the Ensemble is a favorite of mine (shocking, I know).

The Ensemble is one of the best I’ve seen anywhere.  Multi-talented in song and dance including a terrific tap number, they also are called on to play multiple roles.  Derek John Tatum and Lance E. Hayes, for example, skillfully play four different roles in addition to several Ensemble performances. That also includes being part of the “little old ladies” fantastic dance number “Along Came Bialy” complete with floor-length dresses, gray wigs and walkers.  Hysterical.  That number like so many others in the show was brilliantly choreographed by Tara Jeanne Vallee.

Darius Smith ably leads his nine-piece orchestra to support the vocalists and dancers.  Lighting Designer Andrew F. Griffin is effective in illuminating the stage especially for scene changes and musical numbers as is Max Krembs’ sound design. Seth M. Gilbert’s costumes are numerous and creative given that there are so many characters involved.

And kudos goes to James Fouchard’s magnificent set design.  Two major sets are needed: the exterior of the theater with Manhattan’s skyscrapers in the background and Bialystock’s office.  Both are outstanding creations.

Overall, Olney’s presentation of The Producers is high quality entertainment through and through melded together by brilliant direction and an immensely talented cast and crew.  If you enjoy a laugh or two, come prepared for a hundred.

Running Time: Approximately two hours and 35 minutes with an intermission.

Advisory: The play contains adult situations and is not recommended for children under 13.