Theatre Review: ‘The Tale of the Allergist’s Wife’ at Theater J 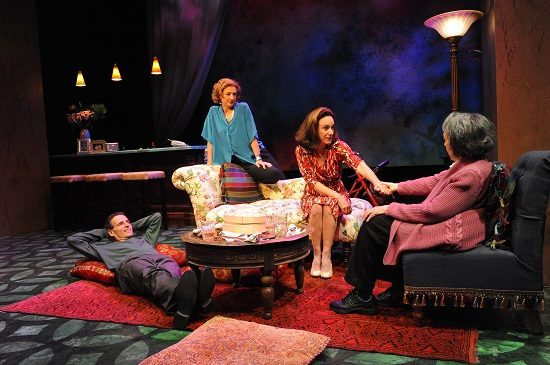 Theater J presents The Tale of the Allergist’s Wife by Charles Busch, on stage now in Washington DC at the Morris Cafritz Center of the Arts from June 3rd thru July 5th 2015. The author chose to use a stereotypical Jewish doctor and what is more unromantic and boring to talk about but the runny nose! It is a lesser known production and is skillfully and joyfully directed by veteran director, Eleanor Holdridge. Written in 1999 and originally performed in February 2000 by the Manhattan Theater Club, this unique production updates itself continually. I enjoyed the surprise of the plot as it unfolded. The dialogue and pace of Allergist’s Wife is lightening fast and elitist, it is clear that they chosen the correct locale to present.

Washington DC is home to many intellectuals, and has some the most educated, pretentious over achieving citizens in the country.  Caite H. Kemp, the set designer has kept the stage simple, a small elegant New York Upper East Side living room, a studious doorman from Iraq sits at his desk begins the show writing in his diary. The narration written by our doorman appears above the stage for the audience to read and understand. The set remains mostly unchanged throughout the show.

…I will tell you that this show will bring out your inner snob, is guaranteed to put a grin on your face, and a tingle.

Maboud Ebrahimzadeh, veteran to the Washington stage, plays Mohammed an immigrant doorman the perfect quiet albeit judgmental observer. Lights up, but not too bright, as our pampered, self-deprecating New York Socialite Marjorie Taub played by Susan Rome, is in the depths of a wildly maniacal clinical depression. Like so many histrionic New York women, she takes to the couch in her bathrobe, bellowing her troubles to the audience. We learn her psychologist has recently died. We know after 3 minutes of this show that we will have to dust off our college Philosophy books off as soon as we return home. Socrates said, “The unexamined life is not worth living.” And while Marjorie’s life is not worth living, it absolutely is entertaining as her diatribe of self loathing and great author name dropping continues. Bored and lonely she lives in a 2.5 million dollar apartment on the upper east side. Married for 32 years to a newly retired allergist who is also self-absorbed and bland it is familiarity and it is not passion that keeps this couple together. While our middle-aged handsome doctor now donates time to the poor, working at the university, curing miserable wretches, he craves the love and admiration of colleagues and patients. Our doctor, Ira Taub is brilliantly played by Paul Morella, adored and respected by everyone, because he mentions it constantly, except perhaps his narcissistic wife.

While Marjorie berates herself for not living life, not being more of an intellectual, not understanding many of the masterpieces she has read, her mother further disparages her. Absolutely non empathetic but plenty egocentric, Frieda the epitome of the Jewish mother enters the scene. Nagging and pleading while kvetching, Barbara Rappaport, is absolutely hilarious as she plays Frieda, who argues with her daughter and adores her son-in-law the doctor. She deliciously sets the audience up for the spectacle about to unfold before our eyes. With all the Jewish mother guilt and guile and experience of the last 5,000 years, Frieda picks on her daughter in both English and Yiddish, “go out and do something, volunteer, be a mench.” While her daughter contemplates suicide, Frieda kvetches and continually demands her daughter and son-in-law help her with her suppositories complaining in hilarious graphic detail about the pains in her bowels, colin, stomach especially whenever the Taubs are dining.

Just when the audience is feeling like killing our main character Marjorie, in comes the blond, sultry, positively sexy Lise Bruneau playing the name dropping, promiscuous, accomplished Lee Green. Ms. Green has by coincidence just happened to be knocking on the wrong door when she bumps into her childhood friend Marjorie. Lee has done everything imaginable, it is ludicrous how many names and places, jobs and accomplishments this one woman has had. However, Marjorie pops out of her funk and enters the real world, gets dressed and awakens in the ultra exciting world with Lee. Ira and Freida are both thrilled that Marjorie has a new friend but quickly decide the friend must be a delusion as neither has ever seen her and for some reason, either has the doorman. Marjorie herself starts to believe that Lee maybe a figment of her psychotic imagination, and sitting in the audience I too was certain she was just an illusion. Marjorie, now quoting notable works of literature and philosophy, where the main character or author is completely off their rocker, stands ready to be committed to a mental institution, when at the very last seconds of act I, Lee arrives. Sound designer Eric Shimelonis musically moves us from one mood to another. Then lighting designer Jason Arnold cuts to black just when things were heating up, it is just like a lighting designer to demand the last word. Intermission.

And whether she is real or imagined, the lovely and erotic Lee (and let me tell you folks, she is hot!) is in the process of making herself invaluable to this family. She is seductive on many levels. Anyone familiar with a name dropping hack will begin to chuckle with each mention of what Lee is doing and who she is doing it with (the Clintons, Henry Kissinger, Madonna, Lady Diana, Richard Prior and Mikhail Gorbachev and the Queen of England herself). The show also stands out as being elastic, as there are continual updates and it is notable that many of the references are as current as Will and Kate’s new baby girl. Frank Labovitz knows how to design costumes for this production. Two Helen Hayes nominated professional, Mr. Labovitz creates a stage of high fashion statements dressing our conservative doctor and wife in fitted designer clothing, Lee in sinfully loose clothing to accompany her scruples, and mother Frieda in last year’s Loeman’s shmatah.

While Plato, Aristotle and Socrates may write of androgynous sexual characters, the Taubs have never experienced anything erotic. And that my friends is going to change. Will our Allergist’s wife be seduced by words and passion or is this all a manifestation of her desires? Will our blasé married 32 years couple, do the unthinkable, experience the sexual freedom of the poets, without regard to convention, religion or shame? And rather than give you any more hints, I will tell you that this show will bring out your inner snob, is guaranteed to put a grin on your face, and a tingle.

Advisory: Not suitable for children under 18.