Theatre Review: ‘The Word and the Wasteland’ at Source Festival 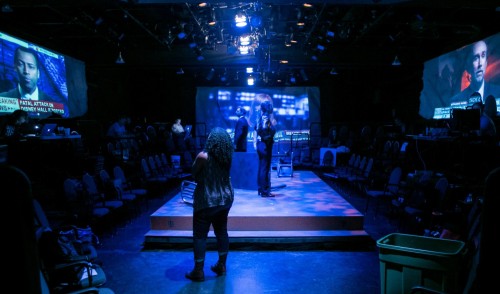 Tamieka Chavis, Greg Thompson, and Sarah Ferris in Timothy Guillot’s, “The Word and the Wasteland” at Source Festival 2015; Photos by C. Stanley Photography

It is the 8th year for CulturalDC’s Source Festival, which seeks to combine rising talent with established artists and has been a great launching pad for both new work and artists in the district. This year, centering around the three themes of “Mistakes and Media, Love and Botany, and Science and Soulmates,” there are three full length plays, 18 10-minute plays, and three “artistic blind dates,” where artists from various disciplines work within the festival themes and a limited timeframe to create an original work.

Timothy Guillot’s production, The Word and the Wasteland, is one of the festival’s full length productions and part of the “Mistakes and Media” theme. It is a highly ambitious and certainly entertaining show in crime-TV fashion with intense multi-media surround-sound and screen effects.

The story opens with the devastating bombing of Disney Hall in LA, and we watch the story unfold and sensationalize through three screens of competing media coverage. It rapidly develops that the authorities have a lead and have taken a man named Benjamin Harding, played by Joshua Simon, into custody. There, a team of ill-fitting FBI partners begin the interrogation and investigation. Young, ready to go, newbie agent Katherine, played by Sarah Ferris, immediately angers veteran agent Richard (Greg Thompson) by taking initiative on the case. She follows a lead which connects Harding to a young, Bronx, spoken word artist named Lizzie, played by Tamieka Chavis, and has the woman flown out to meet the suspect–who has agreed to only speak with her, on the condition that she speak his poetry on her youtube channel.

As Lizzie launches to celebrity status as the (poetic! humane!!) voice of a terrorist to the world and the agents come to believe that a second attack is imminent, tensions mount over motive, the means to an end, and the skewing effects of the media. Another character, Woodrow, played by Zach Bopst, suddenly comes into the plot, adding to the drama as the FBI investigate him and what he may or may not have to do with the bombings and their current suspect, Harding.

This is certainly a show worth an evening’s entertainment, and Sarah Ferris’ brilliant characterization was a pleasure to watch. She dominated the production and her character of Katherine was perhaps the most developed of the script. Joshua Simon’s performance of a violent terrorist played to audience expectations; the perfectly silent, creepy, slightly twitching person often suspected immediately, and Tamieka Chavis made a sweet poet whose confusion and moral and emotional dilemmas were usually interesting to watch. Greg Thompson and Zach Bopst had some of the less believable roles in the production, and it is hard to say how much was the effect of acting or the effect of a script that still needs some finishing up before taking off as the next big blockbuster–which it certainly has potential for. Some of the FBI related action in particularly seemed a little over-extended and in need of a little more grounding in reality or a little more exaggeration into a fictitious experience to help the audience successfully suspend disbelief.

One of the strongest (and most laugh inducing) parts of the production was the usage of media and the method of portrayal. The three screens playing simultaneously different news broadcasts could be a little overwhelming and had moments of technical difficulty, but it was certainly effective to watch the interplay of media and real life. This effect was further expanded in the moments when a character speaking on the screen as a recording appeared on stage in person speaking in sync and the screen fades away–or the reverse, as also happened. It really highlighted the different ways we interact with information and people when the means of that interaction is on screen or in person.

I, for one, certainly look forward to seeing more plays from Guillot in the future and a tightened version of this particular production on stage again.