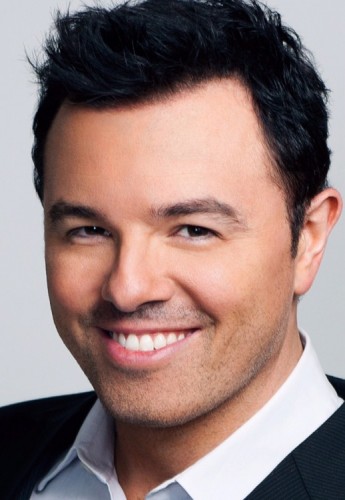 If you think of Seth MacFarlane, the first thing that probably comes to mind are the highly successful adult cartoon comedies he created – “Family Guy” (now in its 13th season) and “American Dad” – or his Ted films about a potty-mouthed teddy bear, starring Mark Wahlberg. MacFarlane is also an Emmy-winning voice-over artist for “Family Guy.” He was an executive producer for the 2014 “Cosmos: A Space Time Odyssey” which has won countless awards. He even hosted the 2013 Academy Awards where he was also nominated for the original song, “Everybody Needs a Friend.”

But this over-achiever also garnered two Grammy nominations for his first 2011 swing album, Music Is Better Than Words, which debuted at #1 on the iTunes jazz charts.

It was a fabulous evening of entertainment, full of humor and beautiful music.

Mr. MacFarlane is currently on tour performing with symphony orchestras around the country. He also brought along a handful of very talent musicians from the jazz and entertainment scene in LA to support him. Conducting the BSO was the Emmy Award-winning Joel McNeeley who has produced all of Seth MacFarlane’s albums, including his third album to be released later this year. On keyboard was Tom Ranier, one of Southern California’s top jazz performers, who also plays clarinet and saxophone. Bassist Chuck Berghofer and drummer Jake Reed rounded out the talented quartet. The BSO did a wonderful job, giving each song that lush, big band sound that you rarely hear anymore and MacFarlane acknowledged their talents often. A special nod must be made to the horn and violin sections.

If the music a man loves and sings says anything about the man, Mr. MacFarlane is a bit of a dichotomy – even he points this out himself. He certainly doesn’t need to do this, but clearly this is a passion and he is quite the surprise. MacFarlane nearly filled the huge Joseph Myerhoff Symphony Hall, not only with lovers of this music but also with a strong showing of young fan boys and girls who probably did not come for the music. I hope they got an education. I know I did and I love the genre.

To be honest I have never been fan of his TV shows and films but there is no question the man is funny – and can he sing! Of course a few non-PC jokes and colorful language were to be expected but only a smattering and he kept it light. There were a few fan call outs but he got a huge applause when he rebuked one by asking him if he was in his own home. MacFarlane also gave the background to the songs he was presenting. Many were unexpected little gems and not as well known. And, rightly so, he loves Nelson Riddle arrangements and he used them in many of the songs he presented.

Tall, handsome and dressed in black, MacFarlane strolled on stage with drink in hand. What were presumably a decanter of whiskey and a bottle of water sat on a table by the mic. Perhaps it calmed performance jitters and certainly fits the era when the Rat Pack famously drank on stage during their shows in Las Vegas. Like a swimmer braving the cold water, he dove right in with a 1961 song by the “British Sinatra,” Matt Monro, called “Love is the Same Anywhere.” He followed with the lovely 1950s Nelson Riddle arrangement of “Fairy Tale,” sung by Sinatra, and a little Spanish flavored tune, called “The Moon was Yellow.” Then came another classic Nelson Riddle arrangement of the Chet Baker penned “Deep In A Dream.”

MacFarlane possesses a gorgeous, rich baritone and he has studied the masters well. The familiar and oft covered tune “Old Devil Moon,” originally from the Broadway show Finian’s Rainbow, also spotlighted the orchestra that showed it could swing with the best of them.

The poignant Gordon Jenkins song “This Is All I Ask” had been introduced to MacFarlane by his two vocal coaches a married couple in their early 90s when he began studying with them 10 years ago.

“We’ll Be Together Again,” “I Have Dreamed” from The King and I, and a song made famous by Dean Martin, “Via Vineto” (with a little of “Family Guy’s” Stewie Griffin thrown in) closed the first half of the concert.

MacFarlane opened the second half with “Everybody Has the Right To Be Wrong” from the 1965 Broadway production of Skyscraper written by Jimmy Van Heusen and Sammy Cahn. The audience was given a preview of the upcoming album with the Joel McNeely arrangement of “I’ll Only Miss Her When I Think of Her” and the title track, “No One Ever Tells You.” Cole Porter received a nod with “It’s Alright With Me.” He had fun with Mel Brooks’ “High Anxiety” from the film of the same name. We were treated to another lovely song written by Cahn and Van Heusen from 1944 “Like Someone In Love” and from Finian’s Rainbow, “If This Isn’t Love.” Highlighting the BSO’s wonderful string section, he sang the haunting 1939 Hoagy Carmichael tune, “I Get Along Without You Very Well.”

A song made famous by Judy Garland, the 1934 “Zing! Went the Strings of My Heart,” and the very contemplative “When You Become A Man,” which he described as more of a soliloquy, ended the show.

There were not one but two encores urged on by a very enthusiastic audience who leapt their feet. The first included the title song from the Broadway hit Guys and Dolls followed by the cheeky “French Foreign Legion.” (Yes, Sinatra actually recorded that one.) Befitting his sense of humor, the second encore gave us the theme to the TV show “The Love Boat” which MacFarlane sung with great aplomb.

It was a fabulous evening of entertainment, full of humor and beautiful music. The show put a spotlight on Seth MacFarlane’s formidable voice and his respect for the genre and the arrangers. He revealed an unexpected sweet and sentimental side of himself that is belied by a sense of humor that takes no prisoners and often appeals to the average teenage boy.

MacFarlane is a singer who could have lived comfortably in the era of big bands and cheers to the marvelous Baltimore Symphony Orchestra who showed that it could be the biggest and best big band of them all.