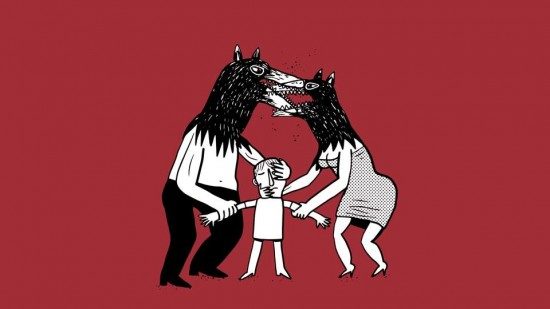 Once upon a time, when I was a wee theatre grad student, there was a truly obnoxious bunch of undergrads who called themselves the Naked Theater.  They were poseurs all, with little in the way of talent (unless you consider arrogance an art form).  Their idea of attending a performance was to walk out en masse halfway through a show, in full view of everybody.  And their idea of performing was to tear off their clothes (or as much as they could con off the girls who volunteered), scream and crank up the heavy metal to 11.

Leave it to Blind Pug Arts Collective to create the perfect satire of these jerks.  The Theatre of Self-Loathing Presents:  Who’s Afraid of Virginia Woolf? is a romp through all the pretensions and idiocies of the theatrical avant-garde.

It’s a blast.  It’s the perfect evening of inside baseball, theatre-style.  For all you theater majors out there, (and recovering theater majors) it’s just what the doctor ordered.  Right after that colonoscopy.

In true avant-garde fashion, the program is a non-program (“Artistic notes are the death of theatre” you see), and when the lights come up you are confronted with two full-of-themselves artistes, Eddie and Cassilda, dressed in regimental black from head to foot.  They proceed to give you a hilarious 10-point manifesto of Theater of Self-Loathing (better than Letterman’s Top 10, I assure you).  This being Gallaudet their dialogue is projected onto a surtitle screens, which is part and parcel with the over-the-top fury of their so-called artistry.

Once the manifesto has been drilled into your head, you are treated to a series of vignettes and sketches that spoof all the greats – Shakespeare, Chekhov, Beckett, Wilder—with the humble assistance of their apprentice/indentured servant, Actor 3.  I must admit that I didn’t catch all the references (admit it; how long did you manage to stay awake in those theatre history classes?) but it’s clear that the cast, whoever they are, know their stuff and love it as much as I do.

Dave Byrd (as Eddie?) provides the perfect straight man, and he punctuates the action with forays into the audience where he asks you why on earth you came, and did you really pay for this?  Meanwhile Paige O’Malley (Cassilda, I presume) uses the show to display some truly awesome comic chops; she also has a real flair for physical humor, when she’s not dreaming of some treatise by Max Weber—who makes a cameo via the clever projections designed by somebody whose name I don’t see in the program.  And Niusha Nawab is priceless as the timid, long-suffering Actor 3, who endures all manner of humiliation (worse than that Raggedy Ann doll they fling about onstage), but who does get his sweet revenge all the same.

Do they get around to the Albee?  Yeah, sort of.  But if you go, watch out for that big draped thingy upstage.  It’s a killer.

The Theatre of Self-Loathing Presents:  Who’s Afraid of Virginia Woolf? Performs at the Eastman Theater on the Gallaudet University campus through July 26th 2015.