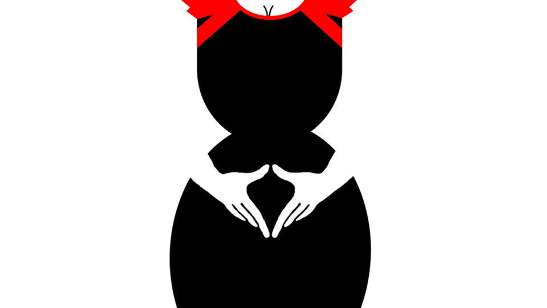 Producing a new musical under the best of circumstances is a daunting task. Producing a new musical in the Capital Fringe festival adds extra pressure because of the limited tech time and load in that the festival gives you. Capital Fringe has an option known as Find Your Own Venue, which means you find a place to produce your show and it can be produced as part of the festival in accordance with their policies. The advantage to this is that you can set your own tech schedule and have a venue to yourself.

Sarah Anne Sillers commands the stage as Medea with a voice that blows the roof off of the Ward Recital Hall.

The producers of Monumental Theatre Co. have chosen to go this route with an ambitious new musical called Girl Versus Corinth, which tries to give an overview of the four stages of feminism as seen through the eyes of the Greek rock star herself Medea, played superbly by Sarah Anne Sillers. Medea has brought along her own backup singers known as the Furies for maximum vocal punch. We have Mary Wollstonecraft (Catherine Purcell), Betty Friedan (Sherry Berg) and Rebecca Walker (Tatiana Wechsler) who provide killer harmonies as taught by musical director Emily Goggin and slick choreography that is provided by Jelani Alladin. Because this is Fringe and Medea is a diva goddess, there is no money to hire an actor to play the male roles of Zeus and other god types so she makes her unassuming stage manager Stephen (Stephen Russell Murray) do it.

That is the basic set up that composer/lyricist and librettist Danny Baird has given us and so far it sounds like an interesting and entertaining idea for a show yes? Baird’s collaborator and director Catie Davis has conceived the show as a rock concert with multiple video screens placed up, down and over the stage. This proves to be a problem for the show in this incarnation. I have to guess that the production is trying to push the video to multiple locations without the proper software and more importantly with a computer that can’t handle what’s being asked of it. The result at my performance was that the computer basically said “No More!” and crashed two-thirds of the way through.

Another issue is that Baird and Davis can’t decide what this show actually is, so we go between serious statements about feminism and a bizarre comedic scene that features Kermit the Frog and a Cabbage Patch doll.

The performances are by far the best thing about Girl Versus Corinth. As previously stated, Sarah Anne Sillers commands the stage as Medea with a voice that blows the roof off of the Ward Recital Hall. As the Furies, Purcell, Berg and Wechsler each have their own feature, so each of these talented ladies has a chance to shine. However, if I have to pick one of the trio as my favorite it would have to be Sherry Berg with her hilarious portrayal of a guest on Medea’s talk show.

Score wise, Baird’s techno pop approach to the material is a strange choice for the subject matter and his lyrics were covered by the over amped music tracks.

Overall, Monumental Theatre Co. got way too ambitious for its first full production. This is the kind of show that needs a good two weeks of tech if the show is going to be presented in the way it is here. The material still needs to be focused if the show is going to continue so maybe the concentration should be more on that. If this can happen and the cast continues with the project, Girl Versus Corinth could be a viable piece in the commercial theatre market.

Girl Versus Corinth runs through July 23, 2015 at Ward Recital Hall – Catholic University of America which is located at 620 Michigan Ave NE Washington, DC.