Fringe Review: ‘Song of Myself: The Whitman Project’ at the Hyman M. Perlo Studio Dance Place 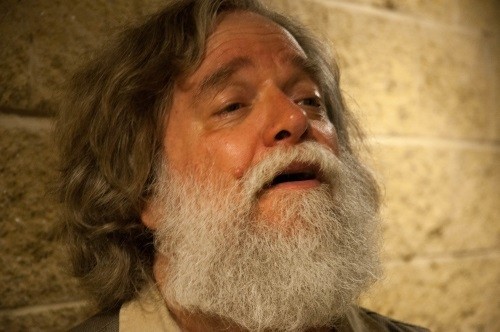 Robert Michael Oliver in Song of Myself: the WHITMAN Project. Photo courtesy of The Performing Knowledge Project.

It should probably be stated right from the beginning that I have never been a Whitman fan and I don’t like grass, so going to see Robert Michael Oliver’s production, Song of Myself: The Whitman Project was a bit dangerous.

The production seamlessly weaves an oral recitation of the poem, “Song of Myself” (from the collection, “Blades of Grass”) with film clips, photographic montages, and sound & lights effects.

Robert Michael Oliver does so much more than simply recite the poem, however–like Whitman, he, too, seems to “contain multitudes.” Passage by passage of poetry springs to life from his mouth in full-bodied character complete with voice, accent, stance, gestures, and gait.

The production is split into four sections, each having a special tone and focus and announced with one of the film clips or montages. Although I struggled a bit in the first section to engage in Whitman’s musings about grass and the countryside life of his time, Oliver’s impassioned embodiment of the poetry enabled me to see the literary prowess of Whitman and the scope of his work. On top of that, the number of characters Oliver adroitly slipped in and out of definitely displayed his dexterity as an actor and was delightfully entertaining.

In the next section, “Three War Montages,” I was held fast, riveted in place by the interaction of war and poetry, death and life and the Oliver-Whitman on stage whose commanding voice and wounded spirit led us through not only the war of Whitman’s time, but war into our own time as well. A bit less entertaining, perhaps, but vividly poignant.

It is nearly impossible to decide which part of the production was my favorite, but it might very well be Oliver’s ability once again to embody a great literary character and make his work and life not only accessible to us today, but real. Sometimes stepping outside of your comfort zone in theatre is exactly the right choice. “Your very flesh shall be a great poem,” Oliver recites, and I for one was very glad of the opportunity to watch such a famous poem take on flesh through the ever astonishing Robert Michael Oliver.

More information can be found here.

Song of Myself: The Whitman Project concluded its run on July 23rd at the Hyman M. Perlo Studio Dance Place, 3225 8th St NE.