Fringe Review: ‘The Winter’s Tale’ at We Happy Few 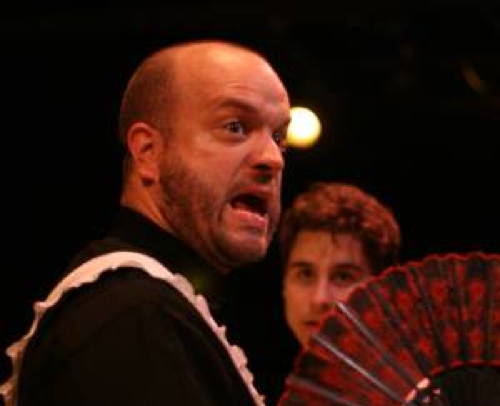 Walking into the Mead Theatre Lab for We Happy Few’s performance of The Winter’s Tale feels a little like stepping into a dream. The black box theatre is lined with gauzy white curtains. The only other set piece is a cluster of white benches and boxes. In a play that can lend itself a mystical and gaudy appearance, this production is remarkably–and perfectly–understated.

It is filled with talented actors…

Six actors (Nathan Bennett, Raven Bonniwell, Katy Carkuff, Kerry McGee, Kiernan McGowan, and William Vaughan) populate a play of over twenty characters. This can sometimes get very complicated–Kerry McGee, for instance, has to switch between the angelic Perdita and the knavish Autolycus several times in the same scene, facilitated by a quick and sometimes hasty transition of a skirt into a poncho and vice versa. Still, the cast is remarkably versatile, and for the most part the characters are distinct and individual, aptly performed.

The story of The Winter’s Tale has been condensed into a merciful hour and a half. The somewhat convoluted story can feel somewhat misogynistic to a contemporary audience: the king of Sicily, Leontes, suspects his wife Hermione of cheating on him with the king of Bohemia, has her imprisoned, then orders her newborn child abandoned to die. Hermione apparently dies, while her baby (Perdita) is taken away to Bohemia, to be cared for by a shepherd and his dimwitted son. She grows up, falls in love with the king of Bohemia’s son, and they are forced to flee his father’s wrath–returning to Sicily, where Perdita is revealed as the princess of Sicily and Leontes’s daughter.

We Happy Few’s production is a clever and touching rendition of one of Shakespeare’s more controversial plays. It is filled with talented actors, hand puppets, and, of course, the most infamous scene direction in theater history: Exit pursued by a bear.

The Winter’s Tale, directed by Hannah Todd, is playing at Mead Theatre Lab in Washington, DC through July 26, 2015, as part of the Capital Fringe Festival. For more information please click here.