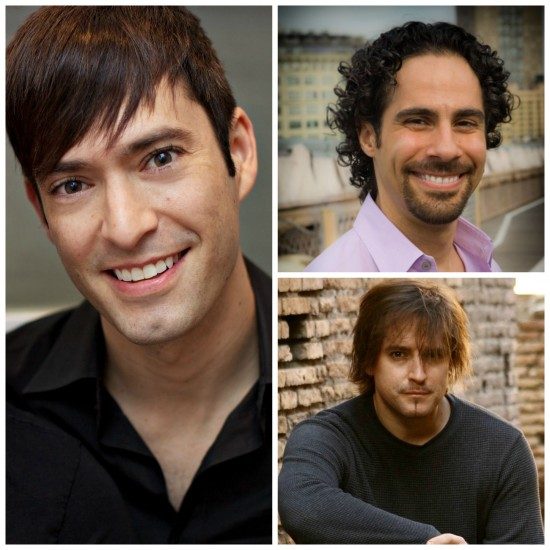 As we all know, it takes a village to create anything in the theatre. Many people work very hard in all of the departments to deliver the finished product you see onstage. This feature will introduce you to the three guys that make up the music department for the world premiere production of Dear Evan Hansen, which is currently in performance at Arena Stage through August 23rd. Their job is to fully realize the vision writers Benj Pasek and Justin Paul have for the show musically and make it happen on stage for you.

I guess you would say that Alex Lacamoire is the head honcho of this team but it is a collaboration between them. Alex is the music supervisor plus orchestrator for the production while providing additional arrangements as well. If you are wondering what a musical supervisor does, it will all come clear a little ways down. Alex won a Tony and a Grammy Award as the music supervisor, co-orchestrator and cast album producer of In the Heights. His latest project is Hamilton (The Public Theater; premiering on B’way in summer 2015), for which he received a Drama Desk nomination for the Orchestrations. Other credits as music director, arranger and/or orchestrator for Wicked; Bring It On; 9 to 5 (Drama Desk and Grammy nominations); Annie (2011 B’way revival); Working (59E59); The Wiz (City Center); The People in the Picture; Legally Blonde; High Fidelity; Bat Boy: The Musical; Fly (Dallas Theater Center) and the 2001 National Tour of Godspell. He is an Emmy-nominated composer for Sesame Street on PBS.

As you just read, Alex is also getting the juggernaut musical Hamilton ready for Broadway so he enlisted the very talented orchestrator/musician/conductor Christopher Jahnke to co-music supervise and write additional orchestrations for Dear Evan Hansen. Christopher’s credits include conducting many productions at the famed Goodspeed Opera House including On the Twentieth Century. His Broadway and off-Broadway orchestration credits include Legally Blonde, Memphis, The Gershwin’s Porgy and Bess and A Man of no Importance. The last two shows mentioned were co-orchestrated with award-winning orchestrator William David Brohn. If you see the current tour of Wicked you can hear Christopher’s fourteen piece reduction of Brohn’s original orchestration. Trust me, it sounds just as full.

Last, but certainly not least, we have the man who is leading the band for Dear Evan Hansen.  Musical director Ben Cohn is currently on Broadway as the assistant conductor for Wicked. He also music directs for Clay Aiken, Stephanie J. Block and recording artist Alfio. His Broadway credits include The Woman in White, The 25th Annual Putnam County Spelling Bee, In My Life and Wonderful Town. His pre-Broadway work includes The Book of Mormon, 9 to 5, Anastasia and Finding Neverland. As an arranger/musical director he has worked for Disney Cruise Line, Tokyo Disney, Sea World, Busch Gardens, NBC and BC/EFA.

Put these three killer music types together with the up and coming writing team of Pasek and Paul and the result will be something to remember. I hope that by reading about the jobs of our musical trio, it will help you to understand how Dear Evan Hansen is being put together from a musical standpoint. If it makes you appreciate the musical aspects of the show a little bit more than so much the better. A brand new musical with Broadway talents and a writing team on the fast track attached to it is my kind of show. I hope Dear Evan Hansen at Arena Stage becomes that kind of show for you too.

How did you become involved with Dear Evan Hansen?

Alex- The first person to call me about the project was Michael Greif, who I met when I was a 24-year-old kid playing piano for Rent auditions!  In 2014, Justin Paul came over my house to play me some songs that he and Benj had written for the show, and I was immediately hooked by their amazing score.  From there, I met Steven Levenson and Stacey Mindich and it all took off.

Ben- I was introduced to the Dear Evan Hansen family by Alex Lacamoire, whom I have worked with on many occasions through the years.  I have also collaborated peripherally with Justin Paul and Benj Pasek on projects in NYC.

Christopher- Alex Lacamoire, who has been the music supervisor of Dear Evan Hansen since the beginning of its development, had a scheduling conflict with the dates of the Arena Stage production – so I was brought onboard to “co-supervise” the DC production with him. Alex and I have been great friends for many years and we’ve collaborated closely together like this in the past so this solution kept Alex involved with the production even though he couldn’t physically be here with us at Arena Stage.

Ben- Can you please talk about the style of score that Pasek and Paul have created for Dear Evan Hansen?

The guys have created a score that is as close to contemporary pop as any that has been written.  It has the sound, texture, groove and memorable melodies of current radio songs with the storytelling, poignancy and heart of a great musical theatre score.

Alex and Christopher- It seems to me that in recent years the position of Musical Supervisor has become more prevalent in theatre. Why do you think that is and can you please explain a little bit about what the job of a musical supervisor is?

Alex- In the theater world, a Music Supervisor is essentially a Music Director that’s not conducting/playing in the pit.  Being a Supervisor gives me the freedom to step back and watch the show from the house and take it in from a sound/orchestration/big-picture perspective.  The supervisor title is helpful for people like me who wear a lot of hats and deal with the show on a macro-level, making sure that the elements are unified and that the composers’ vision is being fulfilled.  It also allows me the fortune of working on multiple shows at once, since I don’t have to be tied to the podium eight shows a week.

Christopher- The Music Supervisor position in theater seemed to come into being back in the 80’s & 90’s when musicals (such as Les Miserables, Phantom of the Opera, Miss Saigon, Mama Mia, etc…) were becoming so popular that they needed someone to initiate and maintain all the multiple companies of these productions that were opening up and running around the world. When a show is in development (as in the case of Dear Evan Hansen), it is the music supervisor’s job to manage the daily “goings on” in the music department as well as to work closely with the composer in helping to him/her to fully realize their vision for the score and then to translate that to the cast and orchestra of the production. 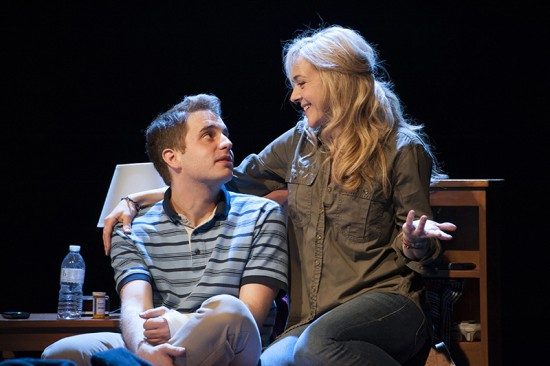 Alex- The collaboration is very important, since Ben is basically an extension of the Music Supervisor.  Chris Jahnke and I are the ones in charge of the whole Music Department, but it’s Ben’s job to be on the ground-floor and to be in-charge during our absence, all the while maintaining the stylistic decisions that we’ve made on the global level.  We need Ben to physically perform the music so that we can listen to the big picture or go to another room and work on the orchestrations.

Ben- The relationship varies from show to show, but ideally, the two work extremely closely throughout the entire process to make sure that the intention of the writers is expressed through the refining and execution of the score.  As music director, I consider my main function to handle the day-to-day operations of the show such as maintaining the vocals and leading the band so that the supervisor can be free to help the composer realize his/her musical vision for the piece.

Christopher- When a show is in development, the MD and the supervisor are constantly collaborating on tempos, cues, vocal stylings, etc.. When a show is up and running, the music director’s job becomes to conduct the nightly performances and also to handle the day-to-day maintenance of the production (vocal rehearsals, understudy rehearsals, etc…). Once a show opens, the music director essentially takes the show over from the supervisor and then the supervisor’s job is to come in occasionally to watch the show and take notes and give brush-up rehearsals.

Christopher- You have either conducted or orchestrated shows which had a big orchestra originally but for varying reasons had to be scaled down for your production. The national tour of Wicked is your 14 piece reduction from the original and you conducted at Goodspeed Musicals for a few seasons. Can you please talk  a little bit about these two experiences?

In the case of Wicked, the idea was to create a scaled-down version of the original Broadway orchestration for the tour that sounded as much like the Broadway orchestration as possible. When I was working at Goodspeed, we had permission from the estates and licensing companies to create completely new and reimagined versions of the shows, which meant we would create entirely new orchestrations – as opposed to simply just doing a reduction of the original.

Alex and Ben- Both you  have a long association with Wicked on Broadway. From the time that show opened to now, have there been any major changes in the way a musical is put together and is it still a constant fight to get as big an orchestra as possible for a musical?

Alex- I feel like a musical’s birthing process is still the same: someone writes a show and then we put it up on its feet to figure out how it can be improved.  On Dear Evan Hansen, there is something modern on a software level: we incorporate newer technology like Logic and Ableton in the creation and the running of the show, which wasn’t the case 12 years ago when we were putting up Wicked.  I wouldn’t call it a “fight” to get a big orchestra on a show, but I will say that the sound of Broadway these days is changing, and not all shows require the sound of a huge orchestra.  I tend to work on contemporary shows that are more rhythm-section based, so the bands will be smaller by virtue of the style of the music.

Ben- We are lucky enough at Wicked to have a 24-piece orchestra.  One of the biggest on Broadway!  Every show has a different evolution and history so it’s hard to pinpoint the differences in the process of bringing a musical to life over the past 15 years.  The needs of the specific show dictate everything from instrumentation to rehearsal room personnel to performance space.  Of course, we would all love to be able to use as large of an orchestra as possible and make the score sound as amazing as we can imagine it to be!