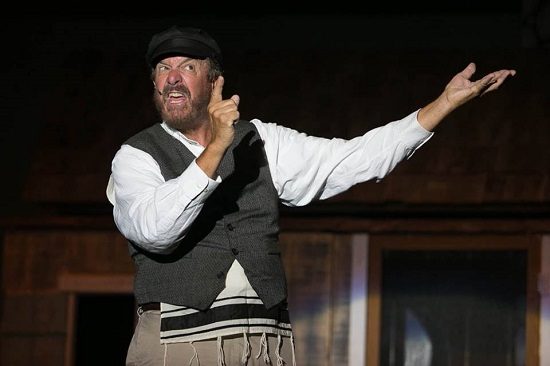 Mo Dutterer as Tevye in ‘Fiddler on the Roof.’ Photo courtesy of HCST.

September 22nd, 2014 marked the 50th anniversary of the Broadway opening of Fiddler on the Roof at the Imperial Theatre.  Producer Hal Prince helped to bring out the best of Joseph Stein who wrote the book, Sheldon Harnick who wrote the lyrics, and Jerry Bock who composed the music.  Together, they helped to create one of the greatest musicals of all time.

Director Tom Sankey says, “We at HCST are proud to present this production about tradition.  This story of the Jewish people and their faith is an inspiration to us all.  We value community, friendships, hard work, and of course, tradition.”

Mo Dutterer gives one of the finest performances of his career in the lead role as Tevye.

Tevye (Mo Dutterer), the poor milkman has five daughters: Tzeitel (Stephanie Ichniowski), their oldest, Hodel (Christina Mattera/Kelsey Reichard), Chava (Kassi Mattera), Shprintze (Madi Heinemann), and Bielke (Maggie Williams), their youngest daughter.  Tevye and his wife Golde (Robyn Bloom) use the matchmaking services of Yente (Robbie Babbitt/Stephanie Clark) in hopes of finding the perfect match for each of their five doweryless daughters.  Breaking tradition, his three oldest headstrong daughters want to find a match on their own.  Life is all about passing on customs for Jews in the Russian shtetl of Anatevka in 1905, where their lives are as precarious as the perch of a fiddler on a roof.  Even more tradition is about to be rattled as an increasingly ruthless government wants to change what kind of people live in Anatevka, including threatening to force Jews from their home.

The production features a large, enthusiastic cast, a 21 piece live orchestra under the direction of Kevin George, choreography by Amanda Tschirgi, and outstanding direction by Tom Sankey.

Mo Dutterer gives one of the finest performances of his career in the lead role as Tevye.  His rendition of “If I Were a Rich Man” has all the “biddy biddy bum” one could hope for, stopping the show with thunderous applause.

Other performances to look for include, Todd Hochkeppel as Lazar Wolf, David Fischer as Motel, Justin Moe as Perchik, Nathan Moe as Fyedka, Kassi Mattera as Chava, and Nithin Venkatraman as The Fiddler (He really plays the violin.).

For fifty years Fiddler on the Roof has earned respect as one of the greatest musicals of all time.  Songs like “Sunrise, Sunset,” “Matchmaker,” and “If I Were a Rich Man,” will always be a “Tradition” in the American musical theatre.

Running Time: Approximately 2 hours and 50 minutes with one intermission.

Fiddler on the Roof plays through July 11, 2015 at the Howard County Summer Theatre in the auditorium of the Mt. Hebron High School— 9440 Old Frederick Road in Ellicott City, MD. Tickets may be purchased at the door or in advance online.