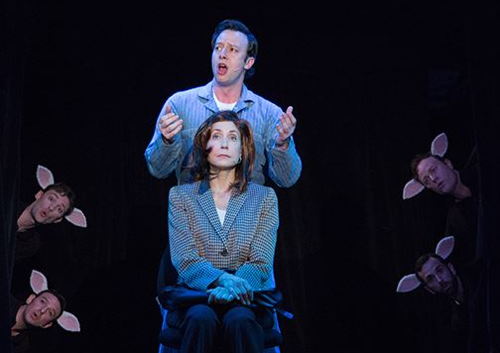 The search for creative ideas to implement has led to numerous movies being turned into Broadway musicals, the hook usually being archetypal characters that resonate and plotlines that translate well to form.  Then there is Studio Theatre’s summer shockfest Silence! The Musical, which has a lot of the former and works hard with that latter. But that is part of the inside joke-the glaring unsuitability of The Silence of the Lambs as inspiration for a musical.

This OMG did I just see that parody of Jonathan Demme’s masterfully creepy Oscar-winning 1991 movie began as a series of songs by Jon and Al Kaplan. The roughly put together musical had a sell-out run in the 2005 New York International Fringe Festival and would feel right at home at the DC Fringe. In its present location at Studio’s 2nd stage, it is a finely packaged ninety minutes of controlled artistic mayhem, sensibilities be…darned.

…thrown together so artfully that panache and blush blend well.

The show opens with a chorus of tap-dancing lambs catching us up on the tale of imprisoned cannibalistic serial killer Hannibal Lecter and FBI special agent, Clarice Starling, who engages with him.

All the famous and infamous characters of movie legend are here…Starling, played by Laura Jordan, plays the insecure trainee Starling as a goofy gangly gal in a thick Midwest drawl and a lisp for good measure. Jordan, who played the role off-Broadway, gently zings the character and is comfortable enough as Clarice to throw in ad libs while keeping the manic material moving. Tally Sessions as Hannibal Lecter is initially almost as scary as in the movie, in the iconic role that Anthony Hopkins gave chills to millions of movie goers a few decades ago. His vocal inflections are amazingly close to Hopkins, and his burning stare initially works well. But it cannot sustain the inherent horror of the movie, and the later knowing winks work better given the parody. His strong baritone was in form, especially in his tête-à-tête with Jordan in “Quid Pro Quo” amid a twirling prison cell.

Our other celluloid psycho–Buffalo Bill, played by Tom Story is just over the top in a Frank-n-Furter way as your transvestite killer with a sewing hobby. In a nod to the movie, the show draws famous lines from the characters and converts them into song, especially the Buffalo Bill songs like “Are you about a size 14?” and “It rubs the lotion on its skin.” Shameful enjoyment.

The main characters are sharp and offset classic scenes with cute one-liners. But the entire cast is lockstep in the mayhem. Sharp dancing and cute asides all add to the goofy spin on the horror plot. Others such as the Senator and her daughter Catherine (Hayley Travers) deliver with great vocals as well as supporting work by Awa Sal Secka, Jordan’s FBI sidekick, who artfully explains why she is in the show.

It’s a little inside baseball, it really helps to know the movie, as when Jordan picks up a picture of the Beaver, reminiscent of Jodie Foster’s other movie…it can get arcane around the edges. And extremely lewd at the same moment, exemplified by Clarice’s first visit to the prison and passing a prison mate and Hannibal’s anatomical song that will remain nameless here.

An acquired taste, but thrown together so artfully that panache and blush blend well.

Director Alan Paul and his entire production team have delivered a stylish show that has inspired aspects and also landmines. But luckily the cast is fully on board with the irreverent agenda and it was well received by the evening’s audience, who seemed to have a solid recall of the eccentric quirks of Demme’s cinema gem. Let’s face it, it’s not easy to outdo the line “I’m having an old friend for dinner.”

Running Time: 1 hour and 30 minutes with no intermission.