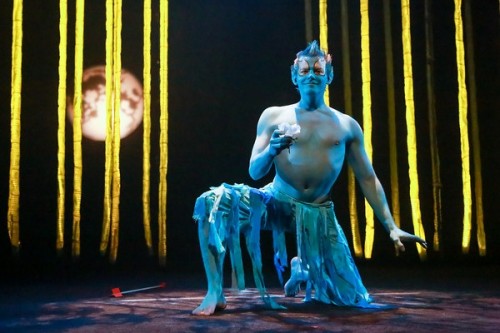 A Midsummer Night’s Dream at the Synetic Theater is Shakespeare like you’ve never heard before! Directed by Paata Tsikurishvili and choreographed by Irina Tsikurishvili, this spectacularly stunning rendition of a beloved Shakespeare play is performed entirely without words. That’s right; no words.

…absolutely scandalous in all the best ways and shimmering with mesmerizing movement.

After a magical opening of firelights and fairies dancing to mystical music and the birth of the changeling child, Puck (Alex Mills), over whom the fairy king Oberon (Philip Fletcher) and queen Titania (Irina Tsikurishvili) will later fight, the production carried on in what I suddenly realized was no longer a prologue, but the actual play. While A Midsummer Night’s Dream has frequently been pulled into ballet and dance pieces, this is the first theatrical production I have ever known to eliminate the words of the great English master.

The show is no pantomime, however, and once I got over the shock of the wordlessness, I was pulled so deeply into the enchanting world that I forgot there were no words (though I may have them memorized, anyways).

While technically absent as spoken language, Shakespeare’s words and poetry are translated perfectly into the astonishing physicality and voraciously raw emotions embodied by each of the actors.

It would be impossible for me to pinpoint which character I enjoyed the most, as I was so wholly absorbed by all of them–from the fairies you seldom notice but who were spellbinding to watch in this production to the rough and tumble villagers you adored to the deeply human portrayals of Theseus (Dallas Tolentino) and Hippolyta (Katherine Frattini) to the poor, love-befuddled and hilariously outrageous Hermia (Irina Kavsadze), Demetrius (Peter Pereyra), Helena (Emily Whitworth), and Lysander (Scott Brown) who had me in tears with the hard time they had falling in and out of love and law.

While some theatrical approaches to the villagers can feel a bit tedious, this little company of rough and tumble villagers was the heartbeat of the show with the characters’ wild hopes and their hilarious antics–including Frances Flute (Tori Bertocci) actually turning out to be a star-struck girl trying to be one of the boys! Even the ever annoying Bottom (Iralki Kavsadze) was deliciously delightful to watch–especially his transformation into an actual a*s, which was achieved largely through his ability to physically manipulate his body.

While the set was fairly fixed and simple, nothing was overlooked or too little for some beautiful detail; from the sinewy piping of trees making up the fairy wood to the elegant leaves and the magical moon where Puck liked to tuck himself away to the ramshackle rehearsal room of the villagers to the quaint stage where they performed at the end. The gorgeous and versatile costuming was perfect, reflecting and enhancing all of the characters as they run amuck through the midsummer eve, and the music set the perfect tone and backdrop, alternating between mystic, majestic, comedic, and more.

The intense choreography, though pedestrian movement and not dance, wove the audience into the story through the changing scenes and showcased an almost sensuous strength in the characters. What the play lacked in words, in made up for in the language of movement.

Synetic Theater’s A Midsummer Night’s Dream is absolutely scandalous in all the best ways and shimmering with mesmerizing movement. Don’t wait to see it until it’s too late to get tickets!

A Midsummer Night’s Dream plays at the Synetic Theater through August 9, 2015, 1800 S. Bell St in Crystal City. Tickets available at the box office or online here.