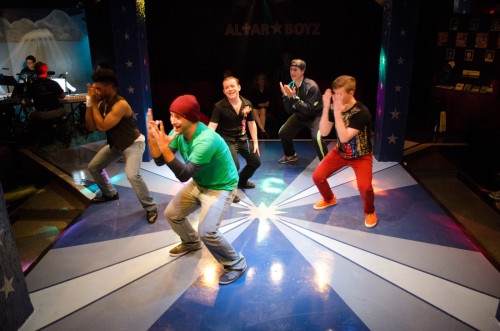 It might be seen as a miracle, but the cozy Spotlighters Theatre has been transformed into a spacious Baltimore concert hall where screaming fans of the 5-member Christian boy band Altar Boyz stomp, clap and cheer at the band’s final concert of their Raise the Praise tour.  Well, maybe not exactly, but the performances from the band themselves spew enough energy and talent to fill any venue, and it clearly works well at Spotlighters.

Altar Boyz, with music and lyrics by Gary Adler and Michael Patrick Walker and book by Kevin Del Aguila, spoofs Christian dogma and its Christian-themed music as well as boy bands’ popularity without a heavy touch and keeps you laughing with the satirical, clever lyrics contained in the songs.  Altar Boyz, which ran from 2005-10, became the 9th longest running off-Broadway show and received several awards including the Outer Critics Circle Award for Best Off-Broadway Musical.

The fictional concert customizes its material to relate to Baltimore (or wherever the musical runs) whereby the boyz from Ohio passionately deliver the messages of Christianity, try to save the burdened souls of the audience, and confront (or confess) their own vulnerabilities.  Though gimmicky, a device called the Soul Sensor (monitors above the stage) is used to count down the number of burdened souls remaining in the audience with the expressed goal of reducing the number to zero.

Altar Boyz’ music spreads across the spectrum of classic rock, hip-hop, a bit of Latin and ballads.  Adler and Walker’s lyrics contain an abundance of puns, jokes and clever clichés, poking fun at organized religion but not in a heavy-handed manner.

Musical Director Michael Tan and his 4-piece band do an excellent job in backing up the “boyz” but the performers—Darnell Davis, Griffin DeLisle, Garrett Zink, Matt Wetzel and Andrew Worthington—steal the show.

Under the crisp direction of Jillian Bauersfeld and the outstanding choreography by José Teneza, the group delivers the comedic punch lines, dancing and vocals that will keep you praying for the concert, with a revival feel, to last longer than its 95 minutes.

Each member of the Boyz incorporates the moves and rhythm of boy bands of yore like Backstreet Boys and *NSync to satirical precision.  Many of the numbers require this type of choreography, and the hardworking group delivers with solid cohesiveness and strength.

Their message of unity that “there is no star as bright as its constellation, no harmony in a single voice” applies to the vocals.  Each member has a turn in the spotlight and they do a creditable job. There were some notable solo performances but they are much stronger collectively.

Songs, such as the opening “We Are The Alter Boyz,” “Rhythm In Me,” “The Calling” and “Confession Stories” are examples of cleverly written lyrics and compelling performances.

The guys’ Biblical names—Matthew, Mark, Luke, Juan (John) and Abraham (a Jew)—set the tone for the show.  But why would a Jewish fellow be part of a Christian boy band?  You will have to come to the show to find out.  All the boyz have unique stories like his that add to the charm of the production.

Darnell Davis plays the group’s front man Matthew.  Rather soft-spoken and an excellent dancer, Mr. Davis, who reveals his taut defined arms in a sleeveless shirt, croons a sweet ballad, “Something About You” to an audience volunteer who sits on stage.

Every boy band has a member with an angelic face, and Griffin DeLisle, donned in snug red jeans, performs nicely as the sensitive Mark.  He makes oblique references to his sexuality mainly through his adoring eyes towards Matthew but being in the Christian band, it has its limits.

My favorite song in Altar Boyz is “Epiphany.” Here Mark comes out of the cloisters to proclaim his identity with pride; he assures the audience that, um, Catholics, are everywhere. “We are your teachers, your doctors, and your Burger King cashiers, and interns. We’re your receptionist and your interns and your Amtrak engineers” and you get the picture.  Mr. DeLisle’s long, powerful last note in the song is one of the show’s highlights.

As Luke, Garrett Zink showcases his talents both vocally and in his dance moves.  He’s the band’s “bad boy” with a hip-hop vibe who had been in “recuperation” from—“exhaustion.”  He shines in the number “Body, Mind And Soul.”

Juan, a comedic character played with flair by Matt Wetzel is the group’s womanizer, the “Iglesias” of the band.  He performs well as a lead in the up-tempo Latin piece “La Vida Eternal.”

Then there’s Abraham, played by veteran actor and director Andrew Worthington.  Wearing a t-shirt that says “Jesus Saves…Moses Invests” Mr. Worthington adds much humor as the ironic Jewish guy in the band.  His performance in “Everybody Fits” is polished.

Finally, Michael Galizia was the Voice of G.O.D. in a brief moment  Who better than he?

Fuzz Roark does an exceptional job with the lighting design to maintain the concert atmosphere.  Laura Nicholson’s contemporary costumes are on point, and Alan Zemla’s simple set consisting of a starburst design on the floor and stars adorning the pillars add a nice touch.

The Spotlighters Theatre completes its 53rd season with Altar Boyz. Yes, there are more clichés and stereotypes in the show than can fill a collection basket, but the wonderful, energetic performances in this fun-filled show make it a worthwhile visit even if you’re not a true believer.