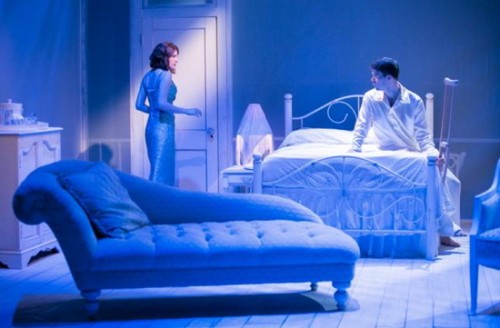 At just shy of three hours long, Tennessee Williams’s Cat on a Hot Tin Roof can be a difficult play to sit through–there are few moments of levity to lighten what amounts to an emotionally devastating family drama. However, the Keegan Theatre’s production is well worth it.

Scenic designer Matthew Keenan has made excellent use of the newly renovated space, creating a world redolent with Southern charm and contemporary decay. The set captures the essence of a Southern plantation past its prime, right down to the chaise longue and a formidable, white wrought iron bed. Surrounding this bedroom is a gallery which various characters traverse during the course of the play, allowing frequent movement despite the singular setting. Three hours of pain, disgust, and bravura occur amidst, and sometimes in sharp contrast to, this pale finery.

It is not to be missed.

Cat on a Hot Tin Roof takes place at a plantation in the Mississippi Delta in 1955, where Big Daddy (Kevin Adams) is celebrating his 65th birthday. His son Brick (Kevin Hasser) and daughter-in-law Maggie (Brianna Letourneau) both know that this is not a happy celebration–Big Daddy has been diagnosed with terminal cancer, known to everyone but himself. Maggie and Brick are in a sexless marriage, and their childlessness threatens their inheritance.

As Maggie, Letourneau brings an astonishing fluidity to her role. Maggie as a character is the proverbial cat, struggling to hold on despite extraordinary difficulty, and Letourneau moves between humor and suffering, coquetry and hardness, with ease. Linda High (as Brick’s mother Big Mama) and Kerri Rambow (as Brick’s sister-in-law Mae) lend some much-needed humor and comedic timing to the play, but Hasser’s laconic presence can be counted on to bring the drama back around. Hasser has few lines–mostly Brick leans on his crutch and drinks–but emanates such palpable misery that he draws attention in every scene he’s in.

The play can feel long at times–Tennessee Williams has a penchant for monologues–but the skilled cast and the deft direction of Mark and Susan Rhea make the three hours well worthwhile. Despite the relatively small space of the Keegan Theatre, one gets the impression of witnessing an epic of Greek proportions. It is not to be missed.