Theatre Review: ‘Catch Me If You Can’ at Annapolis Summer Garden Theatre 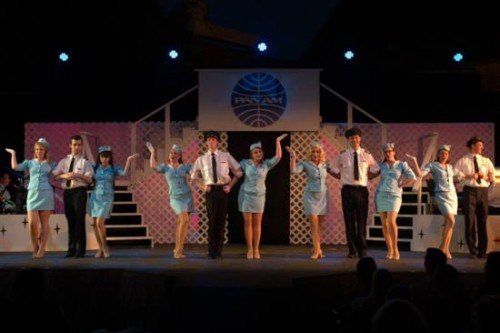 The cast of ASGT’s ‘Catch Me If You Can’ July 2015. Photo by Alison Harbaugh of Sugar Farm Productions.

The Annapolis Summer Garden Theatre continues their 50th season of “theatre under the stars” with a playful rendition of Catch Me If You Can. The musical, directed by Mark Briner, is based on the successful 2002 film of the same title, which, in turn, is based on the true story of Frank Abagnale, Jr., a government employee known for his teenage years as a skilled con artist.

With that said, the musical, set in the 1960s, centers around the young life of Frank Abagnale, Jr., (Ron Giddings) an adolescent who runs away from home in search of adventure. Throughout his remaining teenage years, Frank forges millions of dollars in checks, obtains up to eight different identities, and successfully cons his way into several highly ranked professions, such as a pilot for a distinguished airline company, a lawyer and a doctor. While Frank is wanted in multiple continents, his primary hunter is Carl Hanratty, (Joshua Mooney) a detective with whom he develops an unlikely friendship.

As a cast, the actors perform well with one another. As Frank Abagnale, Jr., Giddings takes the show in a comical direction – frequently outsmarting Hanratty and his motely crew of detectives. He brings an upbeat vibe to the musical, which is evident from the constant laugh of the audience. His rendition of the show opener “Life In Living Color” was an exciting number that set the stage for the remainder of the show.

As Frank’s parents, Frank Abagnale, Sr. (Tom Newbrough) and Paula Abagnale (Alicia Sweeney) perform wonderfully as two parents who simply lost their way with their own child. They remind me that behind closed doors, each family has their own set of struggles, no matter how put together they may seem from the outside-in.

However, the female ensemble stole the show. These women keep a strong presence in nearly every scene, performing as flight attendants, nurses and more to help Frank recount his story. Their costumes—courtesy of Briner—were impressive, too, varying from sequins to bright colors and everything in between. In a way, these women resemble a group of Rockettes – and they certainly have the energy to match.

Throughout the show, Julie Ann Hawk directed the music ensemble flawlessly. The musicians kept pace with one another, and it was especially refreshing how they began to play up to 30 minutes prior to show time, to get the audience ready for the musical.

Matt Mitchell designed the set in a manner that appears simple, yet highly aesthetically pleasing. In a way, it allows for the costumes to take center stage. I loved the simplicity of the black-and-white patterned design, and, although unintentional, the outdoor theatre allowed for nature to take part in the show too. Throughout the Pan American flight scenes, the occasional airplane would fly above the theatre to add a realistic and fun vibe to the set.

Although some of the storylines definitely ran longer than necessary, the ASGT production of Catch Me If You Can is a feel-good show, comprised of a talented cast that works well with one another. The ensemble, directors and crew all appear to work together to turn this show into the exciting production that it is capable of being.

Advisory: This musical contains some profanity and language. Not intended for young children.