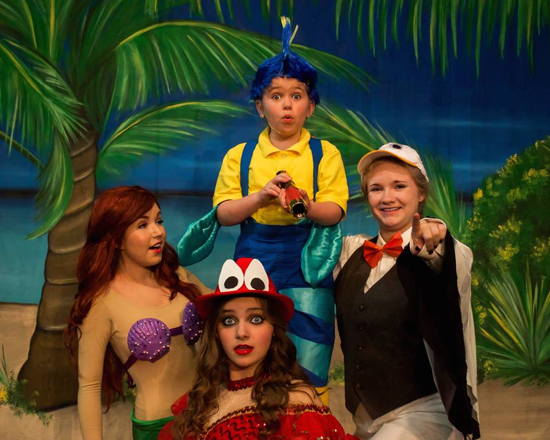 Court Jesters Young People’s Theatre, Cockpit in Court Summer Theatre presented Disney’s The Little Mermaid, Jr., directed by Liz Boyer Hunnicutt, to a full and enthusiastic house Friday night. And I think the audience has every reason to be excited, because the entire cast of this musical is very impressive.

Based on the Hans Christian Andersen story and the Disney film produced by Howard Ashman & John Musker and written & directed by John Musker and Ron Clementse, Disney’s The Little Mermaid Jr., is adapted from Disney’s 2008 Broadway production.

In a magical underwater kingdom, the beautiful young mermaid Ariel is in love with everything human and longs to leave her ocean home – and her fins – behind to live in the world above. But first she’ll have to defy her father, King Triton, make a deal with the evil sea witch Ursula, and convince the handsome Prince Eric that she’s the girl whose enchanting voice he’s been seeking.

This shortened version of the Broadway musical still has almost all of the cute songs from the movie, like, “Under the Sea,” “Part of Your World” and “Kiss the Girl.” And again, this cast does not disappoint in their performances of these now-classic tunes.

Ilyssa Rubin as Ariel is amazing. I first saw her as the adult Fiona in Shrek the Musical, also at Cockpit in Court Summer Theatre, and realized then that her talent is something special, so it is great to see her on stage again.

Another actor returning to the Cockpit in Court Summer Theatre stage is Rachel Miller as the cranky crab Sebastian. I have seen her many times on this stage, but it was great to see her in more of a staring role. Miller’s Jamaican accent as Sebastian never wavered, her singing voice is clear and strong and her presence on stage is a crowd favorite, judging by the laughter coming from the audience whenever she is on stage.

One more actor who is not new to the stage is Ruby Kinstle as Scuttle the seagul, the trash-collecting friend of Ariel and Sebastian. She is great fun to watch and she does a wonderful job singing and dancing through her lively song “Human Stuff.”

A new-to-me actor, Brooke Marriott, as Ariel’s BFF (Best Friend Fish) Flounder, is a delightful surprise and another audience favorite. But I think the one actor/character that got the most laughs was Chef Louis, played by show-stealing Zachary Byrd.

The production staff is to be commended as well. James Hunnicutt’s choreographing is lively and makes good use of the stage with the many performers of different ages. There is an effect that uses cables in one scene that, along with the lighting and set design, by Diane M. Smith, all comes together for an amazing sight.

The costumes designed by Sharon Byrd are fun and well done. Sebastian’s and Ursula’s (played by an adorable Sarah Moscoso) costumes are two of my favorites.

I can happily guarantee that if you like fun songs, great dancing and adorable actors then you are sure to love The Little Mermaid, Jr. at Court Jesters Young People’s Theatre, Cockpit in Court Summer Theatre.