Theatre Review: ‘Everything you Touch’ at Contemporary American Theater Festival 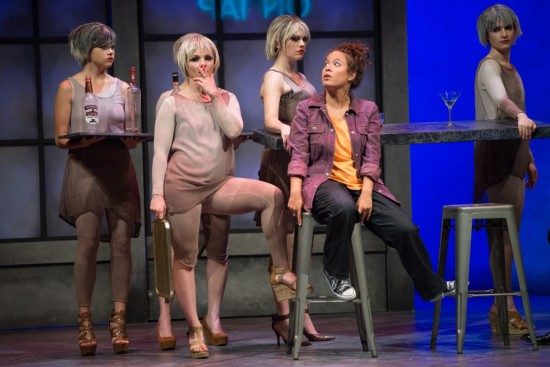 This year’s award for most jaw-dropping opening monologue goes, hands down, to Sheila Callaghan’s epic rant on fashion at the opening of her latest play, Everything You Touch.  It comes fast on the heels of a fashion show in which a young model, imprisoned in one of those nightmare runway outfits, topples to the floor.  Her designer, Victor (the tall, rakish Jerzy Gwiazdowski) lets her have it, making it crystal clear that fashion, for him, is just another front in the war between the sexes:  “It’s a lover’s quarrel that ends in murder.”

The poor model is horribly affected by Victor’s attack; but before long it becomes clear that Callaghan isn’t interested in yet another indictment of the fashion industry.  Everything You Touch has more profound demons to exorcise, not least of them the female cult of self-hatred, and the implacable mother-from-hell.

…funny, briskly-paced, and has a heart of gold.

The bulk of the action takes place in New York City during two different eras—the mid-1970’s and the present.  And although the two worlds appear to be completely unrelated, they come together in fascinating ways by the end; Callaghan’s genius is in creating sympathetic characters (even sympathetic antiheroes) and deliberately misleading you as the plot wends its way towards its touching conclusion.

The 1970s is Victor’s world; we see him in his ‘war-zone chic’ studio, a self-obsessed designer with unconcealed contempt for everyone except his muse, Esmé (the deliciously disdainful Libby Matthews).  The two have risen to fame with grotesque concepts that would not look out of place in a war-crimes trial (fashionistas might disagree); but their harmonious, exploitative relationship is shattered by the entrance of Louella from Little Rock, an anonymous denizen of the secretarial pool who wins a session with Victor in an office raffle.

Under the pen of lesser writers, Louella would be chewed up and spat out in a matter of minutes by Victor’s hip, New York hauteur; instead this Louella (played with unflappable charm by Marianna McClellan) is as solid and centered a human being as you’ll ever meet.  Her self-assurance, in fact, stands in stark contrast to Victor’s profound self-doubt, and his need for her approval leads to a complete sea-change in his design concepts, and the disintegration of his relationship with Esmé.

Meanwhile, the present-day finds us falling in love with the irrepressible, full-figured Jess (Dina Thomas, in a fine turn); a whip-smart office-jockey by day, she day-dreams by night.  And between orders for Thai take-out and trips to Chipotle (where all roads lead, but I digress), we see a young women who knows she should be happy with her body but is haunted by the insults her mother hurled at her.  In spite of the fact that she has an office-mate, Lewis, who is utterly smitten with her (Mark Thomas, as the utterly charming geek, Lewis), Jess constructs an elaborate fantasy in which she hooks up with her rakish father, and even takes him on the road for a long trip home.

These fantasy sequences are furnished – literally – by a small team of men and women who serve a variety of functions (tables, chairs, etc.), and the frank dialogue between Jess and her fantasy dad-lover (forget Oedipus, folks, we’re talking Elektra complex) can be very entertaining.  Touching, also, is the way in which this fantasy-dad, such a negative force in life, can be such a positive influence in death.

David M. Barber has created the perfect industrial setting for the action; a two-story garage in drab grey with trash piled up under the bay doors; he conspires with costume designer Peggy McKowen on a really fun trompe l’oeil effect at the beginning.  McKowen has had entirely too much fun shifting from a hilariously horrific caricature of high fashion at the opening, to the drab geek style of Jess and her friends, to the incredibly hip and colorful shift that Louella’s arrival inspires in 70’s New York.

What is off-putting, however, is the use of sound-cues and lighting, which might confuse audience members who come into the play cold.  Sound designer David Remedios has found a gold-mine of 70s classics to evoke that bygone era, but because they are used to introduce scenes from both past and present, and because John Ambrosone’s lights offer largely the same wash from one period to the next, the plot can get lost.  Where are we?  The 70’s, or the present?  Is what we’re seeing real, or imaginary?  The usual visual/aural signs one relies upon to answer these questions are not consistent, and this is a shame because Callaghan’s story is so neatly woven.

Everything You Touch is a study of a woman’s journey from self-loathing to self-love; it’s funny, briskly-paced, and has a heart of gold.  The gold could use a bit more refinement, but is worth the trip all the same.