Theatre Review: ‘Into the Woods’ at Toby’s Dinner Theatre 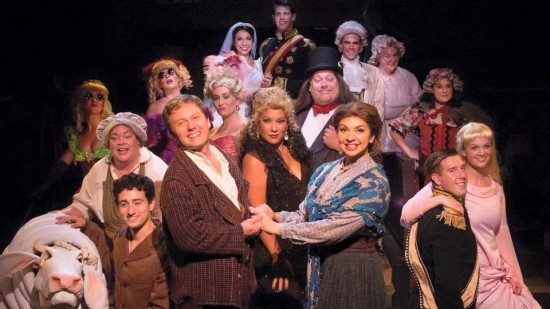 The cast of ‘Into The Woods.’ Photo by Jeri Tidwell.

“Careful the tale you tell. That is the spell…”  Stephen Sondheim’s deep, meaningful lyrics help to tell his tale in the musical, Into the Woods, which proves that “If the end is right, it justifies the beans.”

Toby’s Dinner Theatre brings this spell of a musical to Columbia, Maryland, now playing through September 6, 2015.

Toby’s ‘Into the Woods’ is a delightful, non-stop, twisted fairy tale adventure, where the audience willingly gets lost in the woods.

In a book by James Lapine, Into the Woods takes a darker, twisted, and even sinister look into a blend of Grimm’s fairy tales.

The story also includes a Baker and his wife who wish to have a child, but cannot because of a Witch’s curse. It is very important to the story that the Baker be likable.  Jeffrey Shankle as the Baker rises to the occasion.  He and his equally talented wife, played by Priscilla Cuellar, take the audience on the journey with them to find “One: the cow as white as milk, Two: the cape as red as blood, Three: the hair as yellow as corn, Four: the slipper as pure as gold.”  All this will break the curse placed on them by the Witch.

To help keep the story moving forward and to help explain the action on stage, Russell Sunday serves as the Narrator.

Like the show’s hodgepodge of fairy tales, this production has a blend of hard-working people on stage and behind the scenes in order to make this production entertaining.

Directors Toby Orenstein and Mark Minnick work together nicely to create a live production suitable for the entire family.  And as dark as the book by James Lapine might be, here the directors bring out a twisted sense of humor to the characters and story sometimes missing from other productions that I’ve seen.

Some of the funniest moments in the show are with Red Riding Hood and the Wolf.  Sophie Schulman is so engaging as Red Riding Hood that I and the audience just ate her performance up! Or do I mean the Wolf?  In any case, look for her wildly cartoonish and childlike facial expressions.  I won’t give away any surprises, but her experiences in the woods cause her character to change.

Rapunzel’s Prince (Justin Calhoun) and Cinderella’s Prince (Jonathan Helwig) also made me laugh during the song “Agony” where they are seemingly in competition with one other in the battle over the question which Princess is harder to catch for a wife.

Toby Orenstein and Mark Minnick also create a production that has perfect pacing.  I didn’t need coffee to help keep me awake because Toby’s Into the Woods is a delightful, non-stop, twisted fairy tale adventure, where the audience willingly gets lost in the woods.

This production would not have been possible if it weren’t for the splendid musical direction and orchestrations by Ross Scott Rawlings.  I especially appreciate the real violin included in the orchestra.

A true song highlight is “No One Is Alone” at the end of Act II. Stephen Sondheim’s deep, meaningful lyrics combined with the commanding performances of Julia Lancione (Cinderella),  Sophie Schulman (Red Riding Hood), Jeffrey Shankle (Baker), and Jimmy Mavrikes (Jack) make me believe that “Things will come out right now. We can make it so. Someone is on your side. No one is alone.”

Running Time: Approximately 2 hours and 45 minutes, including one 20-minute intermission.