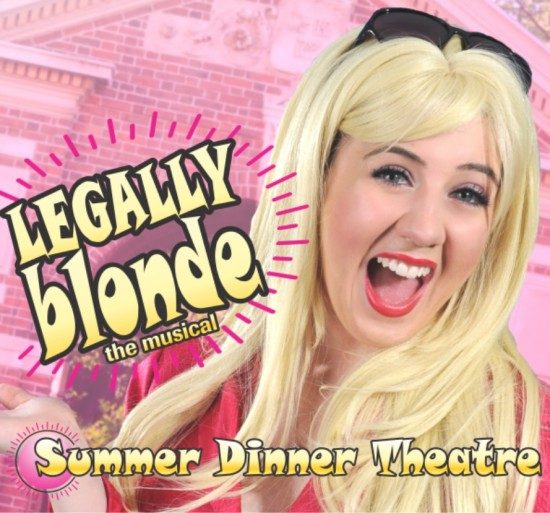 Who knew that a musical about a quintessential Valley Girl who loves to wear pink, has a bubbly personality, and is yes, legally blonde, could be so sophisticated?  I am talking, of course, about Legally Blonde the Musical, now playing at the Montgomery College Summer Dinner Theatre through August 2nd, 2015.

…not only legally fun, but it also brings out the blonde in all of us!

This was my first time seeing Legally Blonde the Musical and, I must say that I was most impressed by the playful book by Heather Hach and the witty and peppy music and lyrics by Laurence O’Keefe and Neil Benjamin.  You put that together with one of the area’s best musical theatre directors and one of my personal favorite local summer college program’s and you have a show that is not only legally fun, but it also brings out the blonde in all of us!

Based on the 2001 movie, Legally Blonde The Musical tells the story of Elle Woods (Victoria Meyers) whose life is turned upside-down when her boyfriend, Warner Huntington III (Marc Pavan) dumps her and moves to go to college at Harvard.  Her new goal in life is to win him back by being accepted to Harvard Law for a chance to prove that she is not just a pretty face.

Victoria Meyers as Elle Woods is not just a pretty face, indeed.  She has several layers to her character, teaching the audience that you can’t judge a book by its cover.

An important song in the show is called “Chip on My Shoulder.”  Emmett Forest (Zac Brightbill), a smart and sensitive law student has taken Elle under his wing.  Emmett has a chip on his shoulder and wants to teach that Elle needs one too in order to succeed, saying “Look, they laughed at me like they’re laughing at you. We can’t win if we don’t follow through.”

The role of Emmett is a marvelously written character where he is opposite of Elle in many ways. For example, he doesn’t wear designer clothes and isn’t financially privileged.  Zac Brightbill as Emmett tackles this role successfully, with a personality that is driven, determined, and sensible.

Other supporting roles include Elizabeth Andrews as Vivienne Kensington, Warner’s fiancee; Audrey Tchoukoua as Professor Callahan, a sleezy and manipulative law professor at Harvard; Geocel Batista as Paulette, a hair stylist who is friends with Elle; and Ellie Rabinovitz as Brooke Wyndam, an exercise video mogul who is currently on trial for murder.

The ensemble is bright and energetic, matching the style of music played by the orchestra under the direction of Marc Bryan Lilley.

Legally Blonde plays through August 2, 2015 at Montgomery College’s Summer Dinner Theatre, at the Montgomery College Rockville Campus – 51 Mannakee Street, in Rockville, MD. For tickets , contact the box office at (240) 567-7676, or purchase them online.