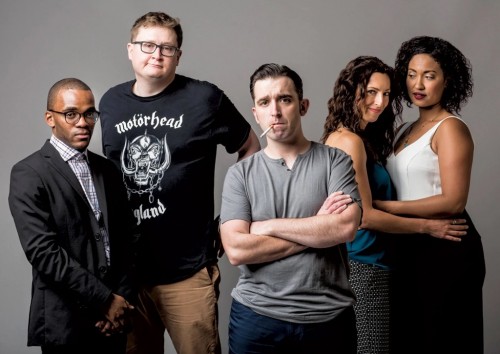 The cast of The Second City’s “Let Them Eat Chaos”, now playing at Woolly Mammoth. Photo courtesy of Todd Rosenberg Photography and washingtonpost.com

The Second City is notable for its vast number of talented alumni, including John Belushi, Dan Akroyd, Stephen Colbert, Amy Poehler, Tina Fey, and countless others. These alumni are noted for their brilliant comedic writing and acting. The cast of The Second City’s Let Them Eat Chaos, now playing at Woolly Mammoth Theatre, could easily give them all a run for their money.

Unlike a typical theatrical production, Let Them Eat Chaos is a series of sketches, occasionally improvised, touching on various topics. The ensemble (Holly Laurent, Adam Peacock, Kevin Sciretta, Niccole Thurman, and Travis Turner) take turns acting out a number of scenarios as different characters. There are thematic consistencies–the show is one part treatise on love, one part satire of the human condition, and consistently funny and unblinking in its critique of the world around us.

A large part of comedy depends on the element of surprise, so plot details in this review are understandably scarce, but suffice it to say that the sketches include a jazz funeral for a broken cell phone, a silent film, a 40s-era romance, and a rap about Pinkberry that includes the line: “I’m like Christ nailed to a cross of yogurt.”

This is truly an ensemble cast, with actors changing roles as easily as they might change hats. The astonishing versatility and comedic timing of this ensemble is almost impossible to describe–every role is fully lived in, even if the role itself is only a few seconds old.

Note: if you do not like shows with audience participation, aim to get a seat somewhere towards the back of the theatre. Otherwise, there is every chance of your life being used in a sketch, or you being included in one.

On the other hand, if you do like that sort of thing, Let Them Eat Chaos has a special improvised third act on July 24 and July 31, including the potential to meet the cast after the show. Regardless, it is an incredibly funny show put together by incredibly talented people.

Advisory: Contains adult language and topics. Not for children.