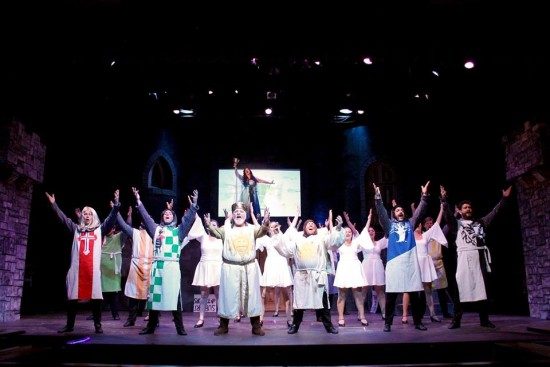 The cast of ‘Spamalot.’ Photo courtesy of the production.

If you like Monty Python, or just plain mindless, goofy comedy, you’re in for a treat. Spamalot, a Broadway musical adaption of the infamous Monty Python and the Holy Grail is irreverent silliness from British comedic mastermind, Eric Idle, who has been both writer and actor in all of the original Monty Python stories, this one being plucked directly from Monty Python and the Holy Grail. Spamalot is the winner of the 2005 Tony award for Best Musical. The the book, lyrics, and music were written by Eric Idle, with John Du Prez sharing in the music credit.

The scenic design by Chris Magee and Jeff and John Merrit is simple, yet hits the mark, honoring the classic 2D animation styles of Monty Python’s Flying Circus antics. The costumes by Amy Wathen Cooksey are authentic, classic and fun and the live orchestra, conducted by James D. Watson never missed a beat. Brooke L. Howells-Weiser, director and choreographer, did a great job getting her cast to live up to the antics of delivering a believable Monty Python experience. They kept their energy high, as some played multiple roles. In fact, recognizing actors in multiple roles sometimes made it even funnier and she did a fantastic job of fitting each actor into their characters.

It’s not easy to perform in a show with such a cult following without comparison to some of the icons who portrayed them first. Though, this cast was up to the task. King Arthur was played with light bulb out perfection by Jimmy Payne. But, wow, did the lights come back on when he sang, which should be no surprise coming from a veteran who performed as John Adams in 1776 and Tevye in Fiddler On The Roof. But, I was still pleasantly surprised every time he sang, and thoroughly enjoyed his dancing as he quipped, “Whose your king?” during the Laker Girls song.

Many comedic moments were carried by Brian Merritt, who was the less than brave knight, Robin, who seemed to constantly be in need of a new pair of pants. The transformation of Dennis into Galahad, was brilliantly performed by hair-flipping Ryan Dolan. Then, there’s a whole other side of the dashing Lancelot we never considered, hilariously portrayed by Patrick Pruitt. Matt Usina perfected his double duty as Bedevere and Dennis’ Mother.  And, I cannot forget Michael J. Margelos as Patsy, King Arthur’s sidekick/horse, who made me laugh in almost every scene he was in. Nor can I forget Carmel Ferrer’s perfect portrayal of a diva as the Lady of the Lake…Then, there was the infamous Black Night, played by Kyle Rappe and some ferocious wildlife in the form of a bunny rabbit…But, you really need to see that for yourself.

The ensemble cast was also fabulous, playing multiple supporting roles throughout and rounding out the big musical numbers. I especially enjoyed Matt Jones’ portrayal of a French Taunter. It was nice to see a couple of my former theatre kids, Emmeline Jones and Erin Carroll moving into more adult roles and really holding their own on stage.

I won’t say much about the plot, except to say that it is an outrageous tale of the journey of King Arthur, gathering his Knights of the Round Table as he quests for the Holy Grail, with hilarious results.

Everyone can take a lesson from one of the songs in this show called “Always Look On The Bright Side Of Life.” That being said, if you can’t make it to Broadway, this is an affordable and just as entertaining alternative. I highly recommend you give it a try.

Advisory: I would advise that there is some mild profanity and mature situations depicted in the show for any parents that are considering bringing small children.

Spamalot runs through Sunday, August 9th 2015 at Port Tobacco Players in LaPlata, Md. Performances are on Fridays and Saturdays, at 8:00 p.m., and Sundays, at 3:00 p.m. Tickets can be purchased by clicking here.