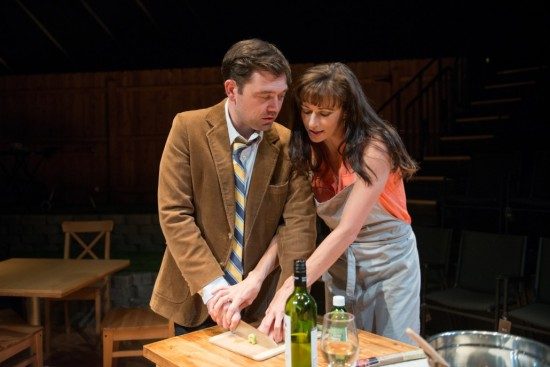 One of the joys of a small repertory, like the one at the Contemporary American Theater Festival here in Shepherdstown, is that you get to see actors assume a wide variety of roles.  You’re so moved by their performance in one show that you nearly get whiplash when they walk onto the stage at the next show, completely obliterating your memory of their gig the night before.  We become so enamored of our favorite actors in “signature” roles that we forget something: the test of a true actor is the ability to assume a wide array of personae, each of them fully realized and memorable.

The vehicle for transformation here is playwright Michael Weller, who’s been on the scene for decades and should require no introduction.  Weller’s ear for dialogue, his sense of humor and his craftsmanship are all rock-solid, as is his current show, The Full Catastrophe.

The title should be instantly recognizable to fans of Zorba the Greek; it is Zorba’s weary way of describing marriage and family; it’s a line that has retained its cachet, among guys at least, for well over 50 years—ever since Anthony Quinn first delivered it.  [My own favorite quote is so politically incorrect it’s pretty much unprintable here, so I’d better get back to business…]

The Full Catastrophe follows the early career crisis of a certain Jeremy Cook (Tom Coiner), a celebrated linguist whose work has been praised to the skies—but hasn’t gained him a steady job.  Desperate for a paycheck he signs on with billionaire and self-taught, self-anointed genius Roy Pillow (Lee Sellers), who has developed an idiosyncratic, by-the-numbers approach to marriage counseling complete with massive 3-ring binders and sealed envelopes.

What Jeremy’s skills as a linguist have to do with marriage counseling—especially given his complete inability to communicate with women—is beyond him.  But he is sent out to do an on-site, live-in session with Dan and Beth Wilson (Cary Donaldson and Helen Anker).

Dan and Beth, on the surface, appear to have everything; steady jobs, a well-appointed home, a sharp-witted son, a full rack of wines, you name it.  But of course it doesn’t take much prompting to see the raw emotions under the surface, and the burdens each bears—burdens which are only expressed in emotional outbursts over completely irrelevant issues (sound familiar?).  And it doesn’t help that Beth,  Jeremy’s client, reminds him an awful lot of his ex-girlfriend Paula.

So, that’s the basic plot; but the truly enjoyable aspect of this evening is the performances, which are spot-on and mind-expanding, given the other roles many in the cast play elsewhere in the Festival. Coiner and Sellars also appear in the mainstage production of On Clover Road, as an incredibly creepy cult leader and his predatory minion respectively.  To see them transformed into a clueless geek and an equally clueless magnate is priceless.  Cary Donaldson, meanwhile, does a modest turn as a pro-forma defense attorney in We are P***y Riot but becomes a sort of suburban Everyman here as Dan, the frustrated husband who has hired Jeremy’s counseling services.

Meanwhile T. Ryder Smith, whose turn as the prisoner Sergey in We are P***y Riot is truly memorable, is in character-actor heaven as he morphs into a secretary one minute, barkeep the next, well-stacked washed-up blonde bombshell in stiletto heels, paunchy brother-in-law (I’m sure I missed a one or two).  Smith earned well-deserved applause for his protean talents.

Rounding out the cast, and fully holding their own, are Helen Anker and young Sam Shunney.  Anker has her own turn at double-casting, since Weller calls for Jeremy’s love interest Paula and his wife/client Beth to be played by the same actress.  Quick-changes from one role to the other are deftly handled, and Anker reminds us (as if we needed the reminder) that jilted guys often project their memories of a lost lover onto the every woman they meet, to the point where they can’t tell the difference between them.  Weller has great fun playing with this phenomenon, and Anker manages the transitions gracefully.  As her son Robbie, Shunney represents every young adult’s worst nightmare:  a kid who can smell phonies a mile away, and who knows the first answer you give him is a pathetic lie.  Like his parents, Robbie has learned to hide his anxieties, however, and he has more than one moment in the spotlight here.

Peter Ksander has given us a finely appointed (albeit surburban-bland) set that transitions nicely from home to hotel to dive bar, and he makes clever use of one corner in the Marinoff’s theatre-in-the-round space to create the great outdoors.  There are other details here which are easier to appreciate if you also treat yourself Ksander’s design for We are P***y Riot in the same space.

Director Ed Herendeen’s familiarity with Weller’s style is evident, and he not only has a field day exploiting Smith’s quick-change talents (often achieved on-stage in a matter of seconds) he makes clever use of the Marinoff space in his staging of Skype conversations between Jeremy and Roy, accompanied by D. M. Wood’s clever light cues.  He also understands the dynamics of dysfunctional marriages, the subtle cues and passive-aggressive tactics deployed, and gets some moments that are uncomfortably familiar for anyone whose relationships have occasionally hit the rocks.

Weller’s dramaturgy is fairly conventional, so if you want edge you should definitely look for other plays in the repertory here.  But here’s the deal:  even if you’d rather have another root canal than sit through another cleverly conceived rom-com, you have got to see The Full Catastrophe, because it makes a perfect artistic book-end to the company’s work elsewhere in the Festival.

The Full Catastrophe runs through August 2nd 2015 at the Marinoff Theater at Shepherd University in Shepherdstown, West Virginia.