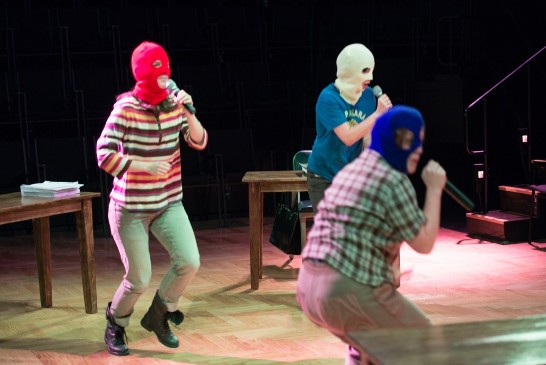 “Feminist punk can drive you crazy, but it’s worth it.  Do not resist it.”

Thus spake Masha Alyokhina, a member of P***y Riot, at the Glastonbury festival in England; last week these brave Russian women stormed the concert grounds complete with a Russian military truck (taking back the weapons of the state is one of their goals), and together they proceeded to agitate the crowd.  (I would not say “entertain” – they are not in that filthy business at all.)

Although they could not join us in the USA this summer, playwright Barbara Hammond has given us the next best thing.  Taking up their challenge, she has produced an outstanding evening of agitprop, We Are P***y Riot, inspired by their famous demonstration in the Church of the Savior in Moscow and their subsequent trial at the hands of Putin’s court.  Director Tea Alagić has assembled a fine cast and worked them into an ensemble that interacts as freely with the audience as they do with each other.

Although a bit unfocused at times, the rough edges of this production are part and parcel with the politically charged style of theater here.  P***y Riot is not about neat narrative arcs or happy endings; their impatience for change defines them, and you wouldn’t want a show about them to betray any hint of the polish that is so often associated with the “legitimate” theater.  If nothing else, the audience’s forced procession through security scanners into the courtroom-stage is a reminder that there are parts of the ‘civilized’ world where performers can get themselves into serious trouble.

Director Tea Alagić has assembled a fine cast and worked them into an ensemble that interacts as freely with the audience as they do with each other.

What also sets this show apart is the emphasis on the suffering of other, anonymous prisoners whom P***y Riot encountered during their incarceration.  T. Ryder Smith gives a truly unforgettable performance as Sergey, imprisoned for trying to prevent the police from beating a demonstrator.  As his rage grows, Sergeye goes on a prolonged hunger strike.  Being a history teacher by trade, he provides a broader context for P***y Riot’s work, as well as the long tradition of brutality and persecution Russia has suffered down through the centuries.  These feminists would never want us to forget the countless victims of Putin’s regime who languish to this day, and Hammond is wise to place them center stage as well.

Libby Matthews, Liba Vaynberg and Katya Stepanov do the Feminist Punk movement credit as the trio at the core of the story – Nadya, Katya and Katya—who are hauled into court for a show trial.  Under the watchful eye of a female judge (played with menacing efficiency by Sarah Nealis) both the prosecution (played with relish by Smith) and a lazy, perfunctory defense (Cary Donaldson) go through the motions of a trial without substance.  As shocking as the proceedings already are, it is even a greater shock to realize that Hammond is not making this stuff up; she’s working from verbatim transcripts of the trial, and blogs posted on the Web by the women themselves.

Peter Ksander has created a fine, spare setting, punctuated by Orthodox icons on the periphery; they stand in mute witness to the complicity of the Russian Orthodox Church hierarchy in Putin’s regime; a reminder, too, that it was the Patriarch’s blessing of Putin that enraged P***y Riot in the first place.  Because the action shifts constantly from court to prison, and then to more nightmarish places, D. M. Wood’s lights guide us flawlessly and—when necessary—ominously.

There is much to admire here, both in the concept and execution of We Are P***y Riot – but I would betray some truly wonderful secrets to discuss them here.  Take it from me, this Riot is well worth the time; especially if your sense of urgency and your desire for social change is at an ebb, this show is a forceful reminder that we all have unfinished business.

We Are P**sy Riot runs through August 2nd 2015 at the Marinoff Theater at Shepherd University in Shepherdstown, West Virginia.