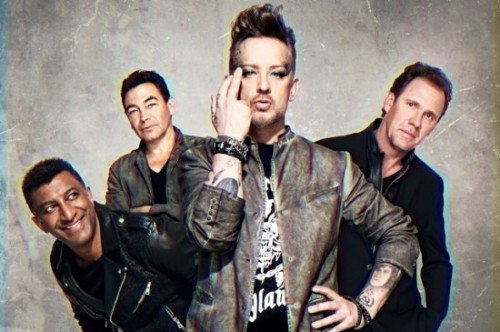 2015 has been a banner year for the return of many popular, 80s New Wave British bands. North American fans are embracing them with full hearts and packed venues, proving that these groups have been gone from our shores far too long. Spandau Ballet, Duran Duran and Culture Club have launched highly successful tours this year – each with deep catalogue of music. Along with some new material and albums in the offing, these super groups from the 80s have proven why they were great then and remain so today.

Spawned from Britain’s punk and New Romantic era of the late 70s and early 80s, the bands represent a wildly creative and inventive era in pop culture. They wrote and performed their own material and created a look that influenced fashion and art as well as the music. Many came up together – their talents incubated in London’s club scene. Boy George worked the cloakroom at the famed Blitz Club while Spandau Ballet took its first steps on the road to pop stardom as the house band.

Over the years, these bands have had their share of ups and downs, band breakups, and drama – none more so than Culture Club and its front man Boy George who has publicly battled and overcome drug addiction. Without question, he is one of the most talented and influential of the 80s pop icons. Sporting full makeup and a penchant for flamboyant cross-dressing, Boy George was a perfect fit for the new medium of music videos and the birth of MTV. He was always true to himself and without him, there would be no Lady Gaga.

In the short, five years the band was first active in the 80s, its success was remarkable. Their debut album, Kissing to Be Clever, produced three top ten singles in the U.S., giving the group the distinction of being the first to do so since The Beatles. Their second album, Colour By Numbers, earned the band the 1984 Brit Award for Best Group and the Grammy Award for Best New Artist and racked up more hits as it went platinum.

After reuniting and recording a new album in 2014, the band’s original tour was cancelled when Boy George developed a serious throat condition. Thankfully it was rescheduled and after a 15-year absence, Culture Club has returned with its potent blend of pop, soul, rock, funk, reggae and Latin-infused beats – and with its four original members. Lead vocalist Boy George, guitarist Roy Hay (equally adept on keyboards), drummer Jon Moss and bassist Mikey Craig were joined on stage by a lively, three-piece horn section, a guitarist, two percussionists and keyboard player. It took the considerable vocal talents of three ladies to replicate the band’s original backup singer, the phenomenal Helen Terry.

At 54, Boy George’s voice is perhaps an octave lower and possesses a pronounced vibrato but it has not lost that innate sweetness – nor has George lost his beguiling, self-deprecating charm. They were both on glorious display this past Monday at Wolftrap in Vienna, VA. What was also impressive was the audience – a blend that represented every kind of person you could imagine and validated the band’s broad appeal. Boy George was engaging and witty in between songs and, in one of the most endearing moments, he called out two enthusiastic children and welcomed them to the Culture Club.

Though now sporting a Tony Stark beard and mustache, there was plenty of the trademark eyeliner and eye shadow along with many colorful costume (and headdress) changes throughout the concert. Boy George still possesses a unique sense of style – and that beautiful face.

The nearly sold-out crowd jumped to its feet as the band opened the show with a bang – a trio of its mega hits “Church of the Poison Mind,” “It’s a Miracle,” and “I’ll Tumble 4 Ya,” followed by a new song “Like I Used To” from their highly anticipated new album, “Tribes.” Other new songs included the reggae-infused “Let Somebody Love You” and a beautiful song of tolerance and love, “Human Zoo.” “Runaway Train” was written in honor of a surprise favorite of Boy George, Johnny Cash, while “Different Man” was a tribute to front man and Rock And Roll Hall of Famer, Sly Stone of the group Sly and the Family Stone. The band included “Black Money” (with beautiful keyboard work by Roy Hay) and the haunting “Victims” from their second album Colour By Numbers.

But there was no denying the overwhelming response to three of Culture Club’s most successful songs, “Time (Clock of the Heart),” “Miss Me Blind,” and “Do You Really Want to Hurt Me.” Boy George also performed his poignant Grammy-nominated song from the 1992 film of the same name, “The Crying Game.”

Thundering and sustained applause brought back the band for the encore that included the new “More Than Silence” and their global mega hit “Karma Chameleon” in which Boy George encouraged an enthusiastic audience to sing-along.

The only disappointment was that “Starman” by David Bowie (probably the greatest influence on the New Romantic bands) was not included as it had been in other cities on the tour. Instead the concert ended with a cover of the T. Rex song, “Band a Gong (Get It On),” during which Boy George introduced the talented band.

Despite the omission of “Starman,” Culture Club delivered a brilliant and memorable concert and the promise that they would return. With the release of their new album next year, let us hope it will be a promise fulfilled.

Upcoming Culture Club tour dates can be found on the band’s website.