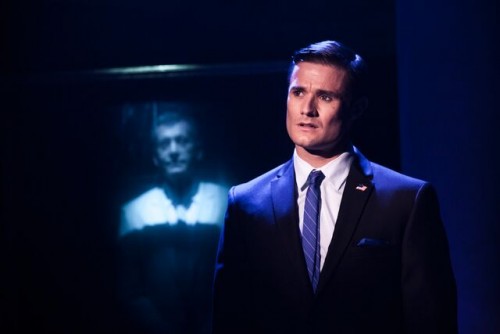 In our politically charged climate, our electoral process can indeed be akin to kabuki theater. Whether a parody, satire, or theatre of the absurd, the upcoming election cycle promises to continually entertain us. Dropped into this, Signature Theatre brings back The Fix, an over-the-top shockfest of the depravities of the political system and the casualties it leaves behind. From its premiere in 1998 at Signature, it has been mildly updated (a certain reference to a President that went to Yale…) but still remains a caustic hodgepodge of political acrimony.

Conceived by the creative team of John Dempsey (Book) and Dana P. Rowe (Music) creators of Brother Russia and The Witches of Eastwick, it introduces us to a power-hungry political machine. With the death of U.S. senator and presidential candidate Reed Chandler (a razzamatazz Bobby Smith) alas dispatched in flagrante delicto, his white house bound widow, Violet (Christine Sherrill), calls upon her only son Cal (Mark Evans), a good-natured rich kid just kicking thru life, to pick up the baton.

Cal is convinced to join the army, then go into political training for his meteoric rise to the top, at local and then the California governorship. He is eager, yet ill prepared. He chafes at what is happening and how his life is being laid out for him, especially since he has little interest in politics, a fact that Violet and her Machiavellian brother-in-law Grahame (a cross, handicapped Lawrence Redmind), Reed’s lifelong manager, hope to change.

The raucous and earthy undertones that imbue the show present us with a biting satire that is quite visceral. Out of control power is combined with sexual energy and the temptations of casual drug use to present a sort of “why not?” attitude. From his father’s indescretions to his own casual encounters with a waitress or his eventual soul mate, Tina (the mesmerizing Rachel Zampelli) the sexual element of the show is akin to power—or a release of it? Many questions are left unanswered, even as a will he or won’t he direction is taken in Act II for Cal, who it told to stick to 3 topics: taxes-(prudent) economy (growth) and gun control (kid’s safety). Is this all there is to politics—cut and paste pastiche of different ideas to fool the willing public?

As Cal, Mark Evans is a pleasure to watch, never looking out of place even as a young aimless youth with a drug habit.  His easy good looks only enhance the classic image of the chosen one. Yet his calling card is his effortless vocal quality, reaching out to the audience in a gilded voyage to appreciative ears. Comfortable in high range, every lyric is clearly delivered, albeit mic-enhanced courtesy of Signatures uber sound work. Equipped with almost too good looks and fit physique, there was a noticeable stir in the audience as he almost fully changed wardrobe onstage, from admiration to quiet exclamation. He makes consistently good choices from drug fiend to public figure. His father-son soft shoe and tap with his ghost-dad dancing around political landmines in “Control” was an endearing moment and an example of the unexpected thrown at you in this show.

The signature of Signature is that they package well, and here is no exception. As the scheming mother, Sherrill was at her Angela Lansbury best, tutoring our Malibu Candidate, with a certain Cruella de Ville twist. Performing a siren song of an alcoholic with failed dreams, “Spin,” she knocks a home run. Bobby Smith is at his energetic best, and dons circus garb to do a dance number with Redmond as the brothers reminisce about college days. How often do you see the old hat and cane dance from someone with MS? The twists come in spades.

As Cal’s mistress and refuge, Zampelli treats us to 2 bluesy numbers and is a pleasure to watch, the only one we truly feel sorry for. Redmond gives a case study in political power and adds a nuanced performance. Mob boss Anthony Gilardi is played by the booming presence of Dan Manning, the heavy in the show—cutting a broad swath through all the glitz and control. The scattered cameos are teetering on the edge of the plotline, but the cast has such a fun time doing it that we accept it.

The most outstanding part of this guilty pleasure of a show is the movement. Matthew Gardiner’s choreography crackles–not so much as in innovation as in synchronicity with the show. The ensemble made the scenes flow as montages, blending into the quasi-reality of the show.

And there lies the magic and the madness of The Fix.  Do we believe that something can it be so crass and brutally blunt and yet hopeful that love and truth will win out? Or is the fix in? Decide for yourself, elections are only 15 months away!

Running Time: 2 hours and 10 minutes with an 15 minute intermission.

Advisory: Adult language, sexual content, drug use and smoking. The production will use theatrical haze, strobe lights and have gunshots.