Theatre Review: ‘Catch Me If You Can’ at Beth Tfiloh Community Theater 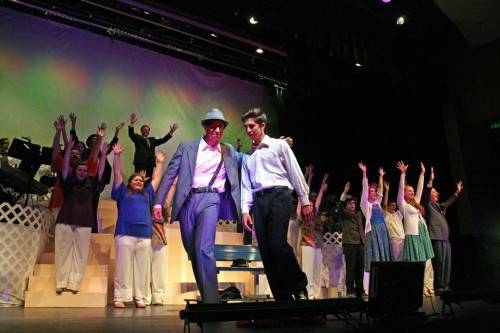 I must admit that when I first saw the 2002 Steven Spielberg film Catch Me If You Can starring Tom Hanks and Leonardo DiCaprio, the last thing I suspected was that this crime drama would ever be made into a Broadway musical. Yet in 2011, with a book by Terrence McNally and a score by Marc Shaiman and Scott Wittman, a musical, indeed, opened at Broadway’s Neil Simon Theatre. Oh, by the way, it garnered four Tony Award nominations, winning one for Best Actor.

For an all-too-brief run at Beth Tfiloh’s Rosen Arts Center, the musical Catch Me If You Can scores high marks under the polished direction of Diane M. Smith. Based largely on the mega-hit film, which, in turn, was based on the biography of Frank Abagnale, Jr., the true story centers on a teenager (Abagnale) in the 1960s who left home and made millions of dollars by being a con artist, check forger and counterfeiter, assuming a slew of identities and professions throughout his worldwide journey before being finally caught by the dogged FBI agent Carl Hanratty.

…high praise for its direction, performances and technical elements.

The eyebrow-raising ruses that young Abagnale is able to pull off (airline pilot, lawyer, doctor, a Lutheran, etc. without ever finishing high school), his tender relationship with his father, his falling in love with Brenda, and his lucky near-miss evasions from the relentless Hanratty provide the essence of the plot.

Noah Broth as Frank Jr. demonstrates a tremendous amount of poise for a 16 year-old performer. His vocals are quite strong and on key in meeting the challenges of some difficult songs, such as the group opening number “Live in Living Color,” “Seven Wonders,” and especially “Goodbye.”

Mr. Broth moves with agility and finesse around the stage in several dance routines, and his acting skills are showcased throughout. The Abagnale character must exude confidence, swagger and charm to pull off his con games, and Mr. Broth, through facial expressions, voice inflections and body language, plays the role to the hilt.

Also performing with great skill is Josh Schoff as the determined and oft-frustrated agent Carl Hanratty. At times intense and commanding but on other occasions allowing glimpses into Hanratty’s vulnerabilities, Mr. Schoff superbly handles the complexities of the role and does so with a bit of campiness and flair. His powerful singing voice shines particularly in “The Man Inside the Clues.”

Both of these young performers play off each other well in the production and both have promising futures in theatre if that’s the path they choose.

Veteran Beth Tfiloh Theatre actor F. Scott Black is another outstanding addition to the cast as the elder Abagnale. Having lost his store leading to financial hardship, refusing help from his newly “successful” son, being under pressure from the IRS, enduring the indignity of his wife leaving him, and ultimately driving himself to drink leading to his tragic demise, Frank Sr. is the character we have compassion for, and Mr. Black’s portrayal of him is robust.

Nicole Smith as Brenda Strong, a nurse whom young Frank met while pretending to be a doctor, does a fine job in her role. Brenda lacked confidence until Frank instilled it in her. They fell in love, planned to marry and have a family until her love got caught by Hanratty. Ms. Smith’s solo, “Fly, Fly Away,” highlights her sparkling singing voice.

As Brenda’s parents, Amanda Dickson and Carl Oppenheim provide the most laughs in the show as Brenda brings Frank home to meet them in a truly fun scene.

There are over a two dozen members of the company who ably support the leads with singing and dancing with many playing multiple roles. The aforementioned Nicole Smith and Amanda Dickson along with Sharon Byrd coordinated the spot-on costumes that ranged from everyday wear to production number costumes for nurses, doctors, flight attendants and pilots uniforms. Ms. Dickson also choreographed the well-executed dance routines.

Chris Rose leads an outstanding eight-piece orchestra whose rich sounds emanated from a multi-level platform on the stage cleverly designed by Evan Margolis. Most of the action takes place in front of this platform bringing the performers closer to the audience. But some performances take place on a platform between the orchestra sections, which change the eye-level and add depth to the staging.

As a community theatre production, Beth Tfiloh’s presentation of Catch Me If You Can deserves high praise for its direction, performances and technical elements. The problem is that it only runs for two more performances so you should definitely catch it while you can.