Theatre Review: ‘One in the Chamber’ at Mead Theatre Lab at Flashpoint 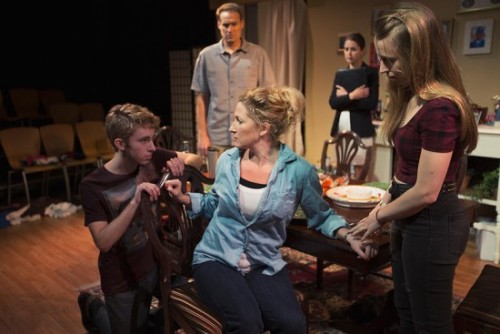 Noah Chiet, Dwight Tolar, Adrienne Nelson, Liz Osborn, and Danielle Bourgeois in One in the Chamber. Photo by Ian Armstrong.

Walking into Flashpoint for the production of One in the Chamber feels almost unsettlingly voyeuristic. The black box stage has been transformed into a disorganized suburban dining room, the mantel and wall covered in family photographs. Clean but unfolded laundry is everywhere, even on the hardwood floor. This is the Stewart family, six years after a single gunshot tore their world apart. The play is about how they’re picking up the pieces.

…it sometimes feels like an intrusion, but that is a credit to the incredible authenticity of its cast, and the general brilliance of its writing.

One in the Chamber by Marja-Lewis Ryan, details a day in the life of Helen (Adrienne Nelson), Charles (Dwight Tolar), Kaylee (Danielle Bourgeois), Adam (Noah Chiet), and Ruthie Stewart (Grace Doughty) when social worker Jennifer (Liz Osborn) comes to determine whether or not to release Adam from his parole. Six years before, a ten-year-old Adam accidentally killed his nine-year-old brother Joey with a gun.

While the talk-backs scheduled for this show are predominantly about gun control and gun violence, the play itself takes a more nuanced approach. The family’s grief is palpable, but generally mitigated by circumstance–Ruthie is too young to have known anything different, Kaylee takes refuge in rebellion, Adam seldom leaves his room, and their parents are simply shut down. This is as much about how a family functions in the wake of tragedy as it is about the circumstances of that tragedy.

This play can be difficult to watch. As I mentioned before, it sometimes feels like an intrusion, but that is a credit to the incredible authenticity of its cast, and the general brilliance of its writing. Even Grace Doughty, young as she is, fits perfectly as the energetic, imaginative child of disillusioned parents. Adrienne Nelson and Dwight Tolar have a subtle and heartbreaking performance as parents struggling with the realities of their family dynamic–Nelson as the alcoholic mother demented from grief, Tolar as the father numbing himself through work.

Stories of gun violence in this country are frequently accompanied by statistics, numbers, and names. The narrative frequently ends at the moment of the victim’s death, or in the end of riots that sometimes follow. One in the Chamber is a unique and brilliant take on what happens to the family that is left behind.

Advisory: due to the subject and some of the content, not recommended for children.

One in the Chamber is playing at Mead Theatre Lab in Washington, DC through September 6, 2015. More information can be found here.