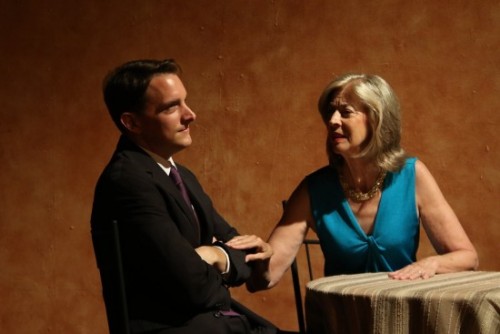 Tying the Knot, a Baltimore Playwrights Festival production now playing at Fells Point Corner Theatre’s Sokal Stage, is about a gay man who decides to marry a woman. With that single plot point writer James L. Beller, Jr. ventures into somewhat new and slightly controversial territory, navigating the emotional and comedic detritus that would move Michael (Brian Kraszewski) away from the arms of actor David (Felix Hernandez) and into those of the unseen Pauline.

…the production itself is excellent…

At once absurdist comedy and relationship drama, Tying the Knot unfortunately feels like something on the verge of brilliance. Brevity is the soul of wit, as Shakespeare said, and the premise of this play cannot sustain over two hours of theatre. Though the frequent (practically consistent) set changes are managed smoothly by the cast, those repeated pauses disrupt and detract from the excellent rapid-fire humor of the play’s present-day scenes. The flashbacks occur in the middle of scenes and conversations, as if memories of Michael’s, tracing back through Michael and David’s somewhat brief but emotionally intense relationship, finally culminating in their break-up over David’s infidelity.

That being said, there are definite laudable qualities. Kraszewski has a remarkable variety, feeling authentic both in his modern-day scenes and in flashback, though Michael’s behavior and confidence are radically different. He very often winds up as the “straight” man against unimaginably forthright mother Arlene (Nancy Blum) and the extremely camp Lance (J. Purnell Hargrove). Both wind up being responsible for some of the funniest moments in the show. As the server at several different restaurants, Claire Malkie has few lines but excellent comedic timing. The production also includes a bizarre dream sequence featuring a Marx-brother-quoting priest played by Suzanne Young, in which Kraszewski demonstrates a remarkable grace in drag.

While Tying the Knot sometimes feels like a work in progress, the production itself is excellent, and a testament to director Daniel Douek’s knowledge and command of the stage. I look forward to seeing where both he and the playwright will take things in the future.

Tying the Knot is playing at Fells Point Corner Theatre’s Sokal Stage through August 23, 2015. More information can be found here.