‘A Quick 5’ with Tessa Klein 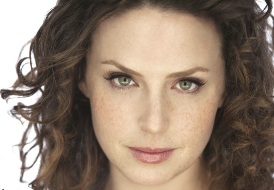 Tessa Klein is currently giving a performance of epic proportions at Studio Theatre in Chimerica where she is portraying the character of Tessa Kendrick. Her Broadway and Off Broadway credits include War Horse (Lincoln Center Theater), The Weir and Philadelphia, Here I Come! (Irish Repertory Theatre), and A Touch of the Poet (14th St Theatre). Tessa’s DC and regional credits include An Ideal Husband (Shakespeare Theatre Company); Argonautika (Shakespeare Theatre Company/McCarter/ Berkeley Rep, directed by Mary Zimmerman); The Call, The Rise and Fall of Annie Hall, and A Seagull on 16th St (Theater J); Promise (WHAT); The Trojan Women (Alabama Shakespeare Festival); and Hamlet, She Stoops to Conquer and Aristocrats (Pittsburgh Irish and Classical Theatre). Film and television credits include The Whitest Kids U’ Know, Disappearances, and Peter and John. Tessa trained at the Moscow Art Theatre and holds a BFA from Carnegie Mellon University.

It’s funny how I come to know of some performers. I first met Tessa on a crowded Bolt Bus heading to NY. I was sitting next to her and we struck up a conversation. I thought maybe I’d work with her in a show eventually because she told me she was an actress. I didn’t know it would take six years for it to happen. I recently had the pleasure of watching Tessa every night in Theater J’s production of The Call from my bird’s eye view at Atlas Performing Arts Center. In Chimerica as the driven British Tessa Kendrick, Tessa (Klein) gives a powerful portrayal of a women who by a chance encounter falls for a journalist who can’t choose between his passion and his new found love for her. It doesn’t matter that the production is over three hours long because Tessa and her fellow cast members keep you thoroughly engaged making the time fly by. There are many, many theatre options this fall in the area but I urge you all to put Chimerica on the top of your theatre going lists. Tessa Klein is just one of the big reasons to go. Here is an actress who turns out consistently good work every single time and I look forward to what is next for another one of our area’s bright talents.

My first professional job was playing Kate in She Stoops to Conquer at Pittsburgh Irish and Classical when I was in college. When I took my little check to the bank at the end of the summer, I asked the teller to Xerox it for me. I still have it in an album somewhere.

Can you please tell us about Chimerica and who the character is you play in the show?

On a basic plot level, Chimerica is the story of a man’s quest to find the subject of a famous photograph that he took 20 years earlier (during the Tienanmen Square protests of 1989), and the people that he encounters and affects along the way. More broadly, it’s about two very different and powerful cultures intersecting and colliding. It’s (primarily) set during the 2012 presidential election and the action zooms back and forth between New York and Beijing. There are two love stories in the show, and I play Tessa, a corporate consultant who meets and falls for Joe. She’s one of the most complicated and fun characters I’ve ever gotten to play. She’s ballsy, edgy, smart, incredibly protective of herself, and (hopefully) very funny. I love her. 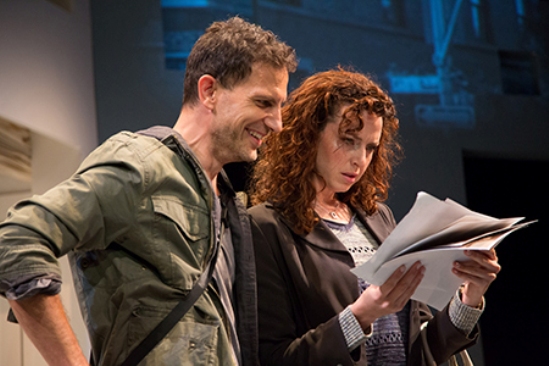 With the Women’s Voices Theatre Festival in full gear, can you please tell us why you think it is so important to have a strong female presence from a writing standpoint in today’s theatre?

It’s funny, because one of the themes of this play is point of view, and how the perspective of the story teller can influence the plot of the story. There’s certainly a gender imbalance – the majority of plays being produced are by men – and of course the more opportunities there are for women to tell stories, the more diverse and exciting the stories will be. Chimerica is such a bold, ambitious play that it’d be easy to assume that it was written by a man. It isn’t, obviously, but the fact that one might think that only serves to highlight the importance of this festival in fostering the work of strong, talented female writers.

You have a little over one year old daughter. How does one balance between rehearsing and performing a three plus hour play and being a good parent?

Good question! If you find out the answer, please let me know! This profession has an element of feast or famine – you might be going full tilt on a project like this one, or you might not be working at all. This has been challenging, but my husband has picked up a lot of the slack and we’ve been incredibly lucky to have help from my mother, who was able to come and stay with us while I was in rehearsals. I think balancing work and parenting is an enormous challenge no matter what your job is, and I feel really fortunate to be able to still do what I love and then get to come home this amazing little person. One of the biggest thrills of the rehearsal process was having the baby come and meet me at the end of the day, and letting her toddle around the theater and meet the other actors.  I hope she’ll grow up getting to do a lot of that.

What is next for you after Chimerica closes?

I have a few things in the works, but nothing definitive yet. I’m still fairly new to DC, so I’m excited about continuing to explore and embrace the opportunities that this city has to offer. At some point I’m also going to need to unpack our house. We moved the weekend that we went into tech, and I still can’t find our floor!