Opera Review: ‘Carmen’ by WNO at Kennedy Center for the Performing Arts 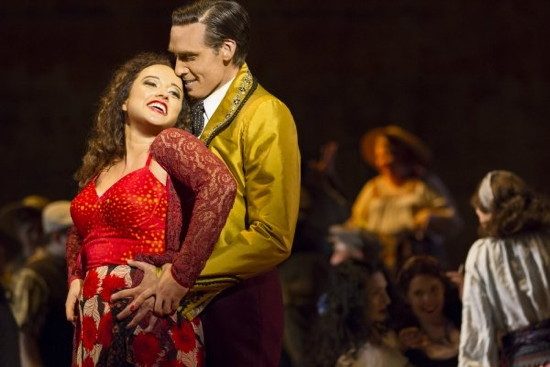 Carmen, now playing at the Kennedy Center, is uniquely brilliant. From the very first moment of its robust overture, echoing the now-iconic “Toreador Song” of the second act, the flavor of this opera is revealed to be unlike any other. Powerful and dynamic, the Washington National Opera’s production is not to be missed.

The production begins with Fanny Ara and Timo Nunez performing the flamenco in red light, against a red backdrop. Their seductive dance serves to punctuate the moments between acts later on, their grace and power almost physically magnetic. Their dance, full of passion, serves as a silent shadow play of the actual events of Carmen–where love itself becomes a powerful but very dangerous dance.

…this performance goes beyond mere adequacy, and into the realm of true brilliance.

Georges Bizet’s opera Carmen tells the story of Don José (Bryan Hymel), a soldier who falls head over heels for the eponymous Gypsy woman (Clémentine Margaine). Carmen, however, refuses to be tied down, and becomes disenchanted with Don José’s regimented lifestyle–Carmen does not typically stay with a man longer than six months. She eventually convinces him to flee the city with her and her friends (Ariana Wehr and Aleksandra Romano, playing Frasquita and Mercédès respectively), hiding in the mountains with a group of smugglers. In this environment, Don José becomes increasingly jealous, and Carmen increasingly upset–especially after she reads her fortune and discovers that their relationship will end in death. When Don José learns from family friend Micaëla (Janai Brugger) that his mother is dying, he leaves, and Carmen instantly takes up with the dashing, brave toreador Escamillo (Michael Todd Simpson). Some time later, Don José returns to beg her to return to him, and on her refusal, stabs her in the heart.

Despite the tragic ending, the overall impression of this production is that it is lively, often funny, and enthusiastic. Many opera performers can be so focused on the (admittedly difficult) singing parts that they forget that opera is also a theatrical production. This is not the case with the cast of Carmen. The ensemble is fantastic, right down to the group of ragtag children playfully imitating the changing of the guard. Margaine herself exudes power and seduction; her physicality is as strong and sensual as that of the flamenco dancers. As her lover Don José, Hymel changes easily between abject devotion (both to Carmen and intial sweetheart Micaëla) and threatening rage, so that fear for Carmen’s life becomes not only realistic but extremely palpable in the final moments of the show. As Escamillo, Simpson exudes a sort of comedic confidence, the dandy to Hymel’s star-crossed lover. He wears the gold brocade of the toreador as if it were part of his skin.

Speaking of brocade, the costumes in this production are just gorgeous. Costume designer François St-Aubin has an eye for the subtle combination of beauty and mobility that makes the visual spectacle of Carmen just as interesting as the musical one. While I am by no means an authority on the ethnic or historical authenticity of the outfits worn by a cast of characters that includes soldiers, flamenco dancers, smugglers, factory workers, and street urchins, the array of clothes that grace the stage are stunning–especially the layered flowing skirts of Seville’s women. This is echoed in the costumes of the two principal dancers, who wear, respectively, a simplified version of the toreador’s tight pants and short jacket, and the Gypsy woman’s ruffled skirt and low sleeves.

Carmen is a powerful, engaging, and moving production, performed seamlessly by an immensely talented cast and production crew. While the Kennedy Center never stints on professionalism, this performance goes beyond mere adequacy, and into the realm of true brilliance.

Carmen, a production of the Washington National Opera, is playing at the Kennedy Center through October 3, 2015. For more information, please click here.