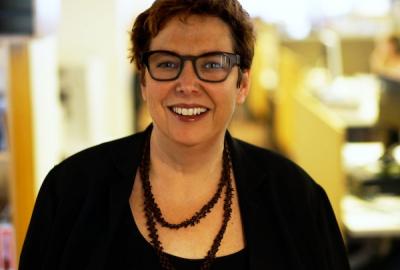 theatreWashington is pleased to announce Amy Austin, the long-time Publisher of the Washington City Paper, a local news and online destination, has accepted the position as President and CEO of theatreWashington.

Austin remarked, “It’s exciting to be given this incredible opportunity to lead an organization that can catalyze success for one of Washington’s most powerful arts communities. We can lift the presence of the theatre arts higher. There are over 90 theatrical companies in the Washington area now and their numbers are growing. They do extraordinary work every night of the week.”

Board Chair Kurt Crowl noted, “What Amy is bringing to theatreWashington is unique: impressive success and experience in our region’s business community and long time involvement in our region’s cultural and theatre communities. She will be an incredible asset in promoting and strengthening our vibrant theatres through innovative programs and services. We are lucky she became available at this important moment in the life of our organization and look forward to an exciting partnership with her.”

Austin served on The Theatre Lab’s Board of Trustees for many years including 10 years as Chairwoman. She is a member of the Leadership of Greater Washington Class of 2015, and a recent recipient of the 2015 John Conyers Jr. Advocacy Award given by the D.C. Jazz Festival.