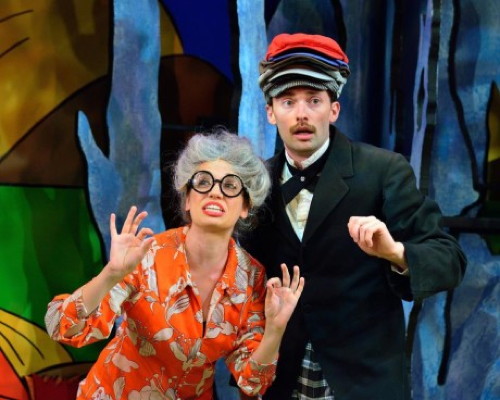 I think the key to excellent children’s theatre is engagement. Engage a group of wide-eyed children, and you can produce a success. Adventure Theatre’s production of Caps For Sale: The Musical, directed by Patrick Pearson, easily captivates children and adults alike, weaving together multiple theatrical elements that are each solid and entertaining.

Caps For Sale: The Musical, is celebrates the 75th anniversary of the children’s book Caps for Sale, by Esphyr Slobodkina. This world premier production is showing for a limited time, until September 27th, when the entire show will hit the road to travel to 17 cities nationwide from October 5 to November 28, 2015. Congratulations to the writing team of Ann Marie Mulhearn Sayer and Michael J. Bobbitt and to William Yanesh for amazing music and lyrics, but more on that later.

Slobodkina’s Caps for Sale is a timeless classic about a gregarious hat peddler and a band of mischievous monkeys. The peddler stacks his hats high on his head so that he is free to shake hands with any new person willing to shake his. When monkeys steal his hats, the peddler finds some very funny ways to outwit the monkeys and gently provides ways children can work through almost any roadblock in their life.

Alan Naylor is the Peddler. He has a strong, clear voice and an expressive face that is hard to look away from. One of my favorite tunes in the show is one that he sings, “My Hands Are Free.” He sings about how open he is to make new friends and his desire to find a new home for himself.

Danny Pushkin, Bibi Mama, Sean Elias, Chelsea Baldree and Rebecca Tucker play the busy townspeople. When they first meet the Peddler, they are not convinced he is an actual salesperson because he has no store and he wears all his hats on his head. Besides, they are much too busy to pay attention to him. There is so much energy in their opening number, it is easy to tell that all of these wonderfully talented actors are giving their all and thoroughly enjoy their characters.

Before the show, Michael Bobbitt introduced the Composer/Lyricist/Music Director, William Yanesh and predicted that in a short time William will win a Tony Award because he is so talented. I wholeheartedly agree with Michael. Yanesh’s music and lyrics were upbeat, fast-pasted and memorable.

The set was perfect, thanks to Scenic Designer Elizabeth Jenkins McFadden. It is right out of the pages of the book. The big tree is there, and so are the tulips that, during a dream sequence, even get to sing! The costumes, designed by Kelsey Hunt, fit with the book and the set exactly and added to the charming character of the show.

Caps For Sale: The Musical fills its hour-long runtime with catchy songs, sweet life lessons and laughter. Adventure Theatre, MTC amazes me again with the amount of talent they attract, and my tween daughter and I are so thrilled that we have access to their amazing shows. Hats off to Caps for Sale: The Musical.

Running Time: One hour with no intermission. All Ages welcome.

For ticket information to the next stop on the tour, click here.