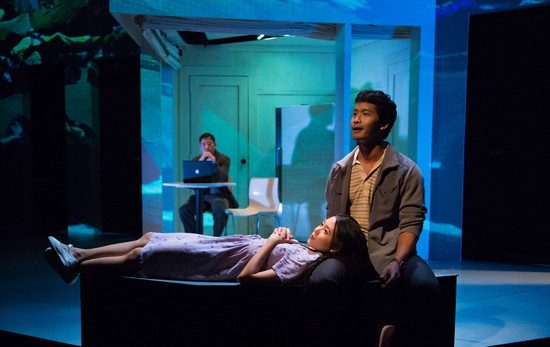 A show that a playwright spends 6 years writing, creating 5 acts/38 scenes, and 3+ hours long play requiring a cast of about 20 (a half dozen who must be fluent in Mandarin Chinese), multiple sets and locations, focused on 2 continents over 22 years with its center be Tiananmen Square massacre, no less—is literally a piece of work. Chimerica, the American premiere of the smash 2013 London hit by Lucy Kirkwood, grabs the stage at Studio Theatre as a rousing visual and artistic experience.

Chimerica, winning Best New Play that year (the English Olivier and Evening Standard Awards), is an amalgam, as the name suggests. The title is actually an economic term, describing the awkward relationship of these global superpowers. “Given the accumulation of American debt by China, the two nations are intrinsically linked; the economic symbiosis between the two suggests that separation would harm both countries and be disastrous for the global economy.”[Wiki]

…a rousing visual and artistic experience.

Here the link is on a culturally humanistic path. And such is the challenge of the show—Kirkwood dangles big concepts while getting her message across through the lives and loves of average Joes. The main Joe (an amiable Ron Menzel) is a photojournalist who just happened to have the perfect view from his Beijing hotel window of the 1989 Tiananmen Square massacre. He captured the iconic “Tank Man” image of the Chinese protester, who, armed only with two shopping bags, stopped a tank in its tracks.

Now in 2012 covering the presidential campaign debates, Joe gets a lead that could help him identify Tank Man. He turns for help to his old Chinese friend, Zhang Lin (Rob Yang) on a business trip to China. Thus begins a fascinating weaving of stories between the two, as they will not meet again.

Joe’s obsession with finding the tank-stopping hero turns out to spur unintended consequences for  those around him, as people start questioning his motives. His world wise reporter friend Mel (Lee Sellars) is a wonderfully acerbic contrast to Joe.  We also meet Joe’s publisher boss (Paul Morella), a case study in corporate machinations, who bellows “Do you think that this is a vanity publication? Just a catalogue of my favorite things?” Morella represents hard-edged political realities, and in his own cut through the air style tells Joe he is canceling his assignment to find Tank Man. Joe now is rogue.

As the search continues, Joe meets Tess, (Tessa Klein) an Englishwoman doing market research concerning American and Chinese consumers. Convenient, but we’ll go with it… Joe’s on again-off again romance with Tess, though aptly portrayed, felt more like a few episodes of Sex in the City. “You took my hand and you were kind. I think I’m in love with you” Tess whines after a globe-hopping moment. Their relationship is simply to portray Joe as a big 40-year-old kid ambling thru life, hanging onto a quest. Contrasted with the sparse, unfulfilled life of Zhang Lin, the effect is stark. Both characters have inadvertently done something heroic; both characters are trying to follow-up in the aftermath of this historic event; does America’s “freedom” allow further exploration compared with China’s government control?

Lin, played by Yang, gives a bravura performance, showing a heaviness of heart that is palpable. As the personified remnant of the failed demonstrations years ago, he cannot move forward to the ‘new’ China. His exchanges with his factory manager brother (Kenneth Lee) are scintillating in their cultural sharpness.  The work of Young Zhang Lin, played by Jacob Yeh and Zhang’s wife, played by Kelsey Wang was believable in nicely staged memory elements.

The themes in Chimerica are so wide-ranging that it taxes the audience’s attention span and ability to hear rapid dialogue crucial to the narrative. But most of these risks pay off.

Is Joe an idealist or a self-serving journalist? What is Zhang Lin’s past secret? Fine uniform performances in a fast-moving show of this length.  Kirkwood’s dialogue of the American and British characters is crisp, witty, though some awkward one-liners exist. The Chinese characters’ speech is edgy and feels right. As well as it being a great vehicle for Chinese actors given a chance to play ethnic.

Artistic Director David Muse has accomplished a vision onstage, with an able production crew, including Set Design by Blythe R.D. Quinlan and superlative video work. Some of the scenes were cramped into a single small space, making it a tad uncomfortable to watch. Possibly a force feed of Asian and American sensibilities?

As the play shuffles back and forth between Beijing and New York, so many issues swirl—individual rights, privacy, journalistic values, politics, letting go of the past—did I miss any? Probably. It is a remarkable play.

As Zhang Lin’s brother says disparagingly to Joe after not looking out for his friend, whose life has descended into hardship and despair: “You are neither East nor West.” Best not to be caught in the middle.

Running Time: 3 hours and 30 minutes with an intermission.