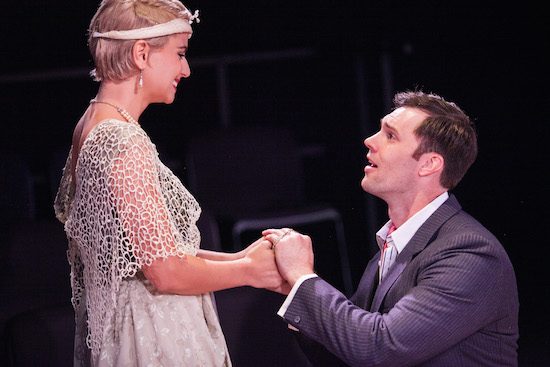 A sultry voice comes over the loudspeaker, interrupting the jazz and swing that had been playing for the last ten minutes. The disembodied announcer asks the audience to silence their new-fangled communication devices and adds a few other bits of choice Roaring 20s slang. Then the room goes dark, save for the dim light illuminating a Cleopatra sofa, a circular ottoman, and a bar holding a Prohibition-flouting number of bottles and an old-fashioned radio.

With a saucy love letter, some lost molars, and a couple of nun impersonators, Friendship Betrayed takes the adage, “sisters before misters” to a whole new level.

So begins WSC Avant Bard’s Friendship Betrayed, a translation of María de Zayas y Sotomayor’s 17th century Spanish play. In Friendship Betrayed four women struggle to balance their relationships with each other as they pursue and are pursued by three men. The play opens as Marcia (Megan Dominy) tells Fenisa (Melissa Marie Hmelnicky) about her new beau Liseo (James Finley). Fenisa scoffs until, seeing a photograph of Liseo, vows to have him for herself. But Fenisa is already the object of Don Juan’s (Christian R. Gibbs) affection, while Marcia is loved by Gerardo (Brendan Edward Kennedy). Meanwhile Belisa (Alani Kravitz) pines for Don Juan, and Laura (Daven Ralston) mourns the loss of Liseo’s love. As the play progresses the women take matters into their own hands, vowing each of them should have the man she deserves.

Despite Friendship Betrayed’s roots in the Spanish Golden Era, Director Kari Ginsburg creatively chose to set the play in 1920s America. The decision to set it in the 1920s, an era of women’s suffrage and growing independence, highlighted the irony of the female characters’ scandalized view of sex. Yet amidst the Spanish imagery of “Moors” and “Turkish sultans,” the characters assert, “it is only right that friendship betrayed should end,” emphasizing that their reaction to sex was due not as much to propriety, but to their belief that women should support each other first and foremost. This passionate focus on female friendship, as well as Avant Bard’s all-female directing and creative team, places Friendship Betrayed firmly in the mix of empowering shows in the Women’s Voices Theater Festival.

Yet as creative as Ginsburg’s interpretation of the play was, Rhonda Key’s costume design truly blew me away. Not only were all her pieces delightfully period (take a look at Liseo’s shoes!), there were at least three costume changes per character. Key’s focus on detail was especially apparent during curtain call when each of the men’s ties matched the dress of the woman who chose him.

Though overall the play was strong, the setting confused me. The set was beautiful and even included 1920s-esque light fixtures and an ashtray full of crumpled cigarette butts. However, I never completely understood exactly where the characters were. One minute they seemed to be in Belisa’s foyer, the next they were in Fenisa’s drawing room. A few moveable set pieces could have remedied this. Additionally, the stage combat could have been improved; because Avant Bard’s blackbox is a theatre in the round audience members could see the space between the actor’s faces and the hands that were supposed to be slapping them. However, my biggest issue with the show was the speed of the actors’ speech. Every actor spoke so fast that everyone seemed to be speaking over each other, and key lines were lost. This jumbling of lines and names added to the confusion that naturally exists in the elevated diction and antiquated speech of this love quadrilateral of a play. Nevertheless, the speed worked well during the characters’ many asides as it resembled the speed of an internal monologue. I just wish they had slowed down the dialogue.

With a saucy love letter, some lost molars, and a couple of nun impersonators, Friendship Betrayed takes the adage, “sisters before misters” to a whole new level.

Friendship Betrayed runs through Oct. 11 at Gunston Arts Center Theatre Two in Arlington, VA.  For more information on the show and “pay what you will” tickets please click here.