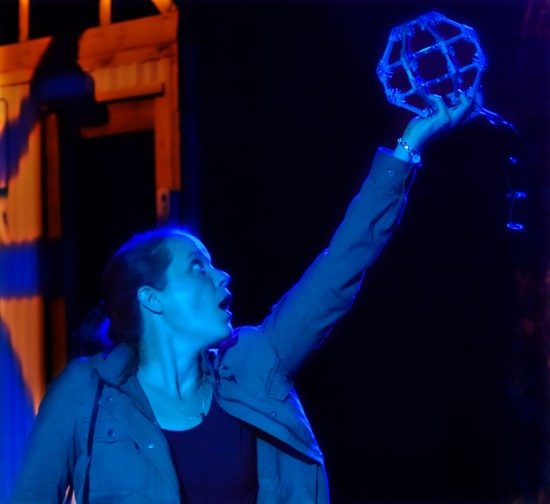 If you are looking for a night of comedic relief, look no further than Taffety Punk Theatre Company’s latest production, Inheritance Canyon. Being part of the audience was like sitting in the middle of a box bursting with laughter. Written by Liz Maestri as a “non-prequel” to a previous play (also produced by Taffety Punk) with the same characters, the absurdist play is complete unto itself and definitely worth catching as part of the Women’s Voices Theater Festival.

Sal (Teresa Castracane), Gary (James Flanagan), and Shell (Esther Williamson) are camping in the middle of nowhere atop a canyon when a massive explosion takes place that changes everything. They go from free human beings to lab rats under the forced supervision of Dr. Jens Kroger (Dan Crane).

…if you want a crisp and modern script, great lines, strong characters, and a fascinating and unpredictable story all wrapped up in hilarity, this is the show for you.

What drives the absurdity of the production are how the characters respond to their constantly changing circumstances. Gary goes through elaborate imitations of characters in misguided efforts to land “The Audition,” which will get him out of the canyon and straight into Hollywood Fame. Flanagan’s facial flexibility and his ability to move in and out of the many personalities his character tries on are quite impressive.

Sal is a good-hearted woman with a penchant for moving from fierce to ferocious, bumbling along to hitting something (literally) right on the spot, and attempting to control the situation through everything from hilarious acting tips to willfully diving into the bottom of a bottle. Castracane has created a character so authentic and full of heart that it was impossible for me not to love Sal even as her temper flares and mood swings and she runs around leveling a massive gun at everyone (because yes, that happens!).

Shell is perhaps the quietest of the group, but certainly not without her own share of drama. As dedicated as Gary is to getting an audition, so she is to becoming a famous scientist and making it big–at the very least, figuring out how to get into a “real” school like Harvard for her BA. She crushes massively on the (good?) doctor, and her attempts to impress him draw their own set of laughs. Williamson gives a passionate performance of Shell, but her skills as an actor shine even more when the doctor somehow creates a double of her (Gwen Grastorf), and the two women must mirror and reflect one another–while still somehow divesting of the other.

But what would the story be without the highly esteemed, wonderfully arrogant Dr. Jens Kroger? His superbly stereotyped German character and spectacularly voiced lines made him my personal favorite. “I-was-UNCONCIOUS! Wounded!!” he cries out in utter bewilderment at one point in the play, and the childish hurt in his character makes everyone laugh. “Don’t listen to these mountain people–they are not well,” he says later in his German accent, and again: laughter.

It isn’t all laughter and games in this show, however. Beneath the surface, the story explores themes of ambition, power, and friendship, and takes a close-up look at time and identity and what it means to be human. Between laugh inducing moments, questions like, “How can we humans exist in a world as cruel as ours?” are slipped into the show to simmer in our minds long after we have left the theater.

Taking place in the black box of the Capitol Hill Arts Workshop, Taffety Punk once again did a great job using the space. You get the top of the canyon and the bottom of the canyon, and Dr. Kroger’s laboratory is outfitted with all kinds of wonderfully bizarre pieces of scientific equipment. The music is unobtrusive and adds to the quirkiness of the moments, and the costumes are well thought out.

All in all, Inheritance Canyon is a great production. It can still use a few tweaks in some of the scene timing, especially in the first half of the show, but if you want a crisp and modern script, great lines, strong characters, and a fascinating and unpredictable story all wrapped up in hilarity, this is the show for you.

Advisory: Guns, violence, and potential splitting of your sides from laughter.