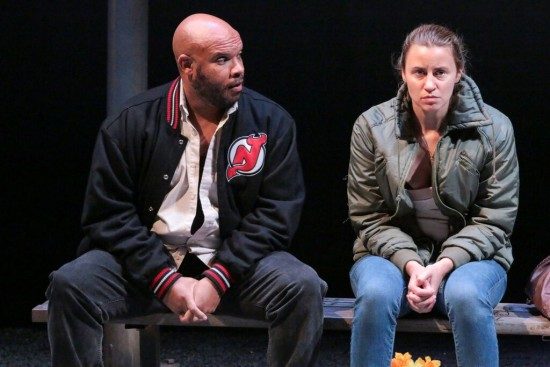 Jefferson A. Russell and Alexandra Henrikson. Photo by Cheyenne Michaels.

Ironbound by Martyna Majok is Round House Theatre’s entry into the groundbreaking Women’s Voices Theatre Festival. It has everything that a world premiere play needs. It features a well written script; superb acting and a high-end production all helmed by the immensely talented director Daniella Topol.

Majok’s tightly woven story takes place under a train overpass in Elizabeth, New Jersey at a bus stop. The area is known as the Ironbound section of Newark in which Elizabeth is right next to. The play starts with Darja (Alexandra Henrikson) who is a woman of Polish descent having an argument with Tommy (Jefferson A. Russell), who is her boyfriend. Tommy has cheated on Darja fourteen times and she has had enough. As the story continues you find out that Tommy took Darja in when she had nothing and because of lack of funds, he is the reason she has insurance for her twenty year old son that she had by her first husband Maks (Josiah Bania). The story goes back and forth in time and shows that Darja doesn’t make the best choices when it comes to relationships but when you are desperate, you take what you can. After all, she sleeps outside at the bus stop nightly. The ultimate question here is if Darja will stay with Tommy or get out of her vicious cycle for a better life elsewhere. Majok’s answer is one that might surprise you due to a particular event that happens towards the end.

…a well written script; superb acting and a high-end production all helmed by the immensely talented director Daniella Topol.

The performances are equally as tight as Majok’s script. Alexandra Henrikson gives a moving and non melodramatic portrayal of the conflicted Darja. It’s the perfect interpretation of doing what you have to do while not giving in to your own principles. Even when a street kid named Vic (William Vaughn) offers her some assistance with money that is not necessarily acquired in a kosher way, she refuses. Henrikson’s performance is a poignant portrait of a desperate yet strong female.

To say that Jefferson A. Russell has a commanding presence as the abusive Tommy would be a big understatement. He never lets up in his portrayal of Darja’s cheating boyfriend. He’s manipulative, manhandles his girlfriend and has a sex addiction. In other words, he’s everything you’d want in a guy… NOT!

As Maks, Joseph Bania makes the most of his scenes and gives us a glimpse of what might have been if  Darja would have stayed with him to raise their son together in Chicago.

William Vaughn as the street tough Vic is only in one scene but makes a strong impression.

James Kronzer’s set which includes a full train overpass structure fills the stage and gives us that seedy and uncomfortable atmosphere that the story requires. Kronzer’s set is complimented by the duo lighting design of Brian Macdevitt and Andrew R. Cissna and the passing trains and approaching buses from sound designer Eric Shimelonis.

Daniella Topol’s direction gets out every ounce of drama that Majok has put into her story and does it so you can genuinely hope that Darja will come out for the better. I’m not saying that she does or she doesn’t but everything is presented very naturally in Topol’s staging so you can have the option without being manipulated.

Overall, Ironbound is the first big hit of the season and Round House Theatre is off to a flying start with a story that should be produced in other theatres across the country. I’m just happy we get bragging rights about how we premiered it here in our area.