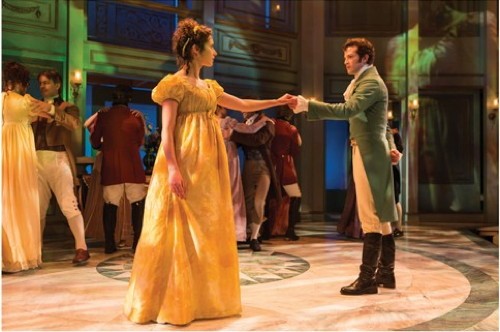 It is a testament to the enduring appeal of Jane Austen’s Pride and Prejudice that Center Stage has chosen to open it’s 53rd season with the world premier of a new theatrical version by Christopher Baker. In recent years, it has been proven that there is no end to the love of this story as it continues to be adapted and reinvented for television, film and books ­– even with zombies.

If you are a fan of Austen or this is your first introduction, you will not be disappointed. It has been trimmed a bit of characters and events. As an example, one of the Bennett sisters is missing, giving the youngest, Mary (the delightful Maya Brettell), a more expanded role. But Baker is true to the story. He has kept the heart, romance and more importantly, Austen’s keen wit and observation of the absurdities and foibles of 18th century English society.

Center Stage’s new production of Pride and Prejudice does justice to the material with rich production values and a fine cast.

Nothing warms the heart of Mr. and, in particular Mrs. Bennett (great performances by Anthony Newfield and Mary Jo Mecca) than the possibility of finding a proper (and wealthy) husband for each of their four daughters. It is a matter of necessity. The girls’ futures are at the mercy of their cousin, the fabulously pompous clergyman, Mr. Collins (Chris Bolan) who stands to inherit their home when their father dies – for only men could inherit property.

When news that a young gentleman of fortune, Charles Bingley (Josh Salt), has rented the mansion at Netherfield Park, the wheels are set in motion. At a country ball, the sweet-natured Bingley falls for the equally sweet Jane Bennett (Erin Neufer). He is accompanied by his snobbish sister, Miss Caroline Bingley (Victoria Frings) and his best friend, the very stern and taciturn Mr. Darcy (A.J. Shively). Darcy refuses to dance with the intelligent and quick-witted Elizabeth Bennett (Kate Abbruzzese) or any of the other ladies at the ball and is appalled by what he considers the low behavior of the Bennett family members.

Of course we know that despite this very rocky start, Darcy and Elizabeth will eventually fall in love. The battle of the sexes and sexual tension is nothing new (think Shakespeare’s Much Ado About Nothing), but it has always been one of the most satisfying of romantic devices – watching the journey of two equally matched people spar their way into love. No one does it better than Austen (other than the Bard) and Abbruzzese and Shively capture the nuances and layers of this emotional journey beautifully.

There are many standout performances amongst this solid cast. Charlotte, Elizabeth’s friend who has even less prospects for marriage, accepts Mr. Collins’ marriage proposal after Elizabeth has turned him down. Kelly McCrann has such sweetness and enthusiasm, you can’t help but fall in love with her yourself. Many of the actors play several characters so look carefully for Patricia Hodges who masters her “upstairs/downstairs” roles with equal aplomb – first as the Bennett family’s harried cook and then as Mr. Collin’s oft-referred patroness (and Darcy’s aunt), the pompous Lady Catherine de Bourgh. Asher Grodman’s handsome bad boy Wickham, and Ali Rose Dachis’s silly Lydia Bennett are perfectly cast.

Director Hana S. Sharif has assembled a handsome ensemble and the play clips along (more successfully in the first act) against the backdrop of a magnificent set by Scott Bradley, used as the backdrop for all the county homes and mansions in the play. It not only has height (two levels) but depth. The panels are scrims and, with the masterful hand of lighting designer Colin D. Young, they can be solid panels or an entrée into the action going on behind the scenes. The stage is a lovely representation of a detailed marble floor.

The use of projections designed by Alex Koch had an inconsistent impact. It was most successful representing Mr. Darcy’s portrait gallery and other scenic backdrops but it seemed superfluous to have a film of Darcy and Elizabeth looking longingly at each other from opposite sides of the stage. It detracted from the obvious growing attraction that was portrayed more effectively on stage by the two actors.

A modern score by Broken Chord injected more contemporary sounds to the music of the era and lona Somogyi’s costumes effectively captured the styles of genteel English country life.

Center Stage’s new production of Pride and Prejudice does justice to the material with rich production values and a fine cast. The play is a great opening to the new season and a wonderful introduction – and reintroduction – to this classic.